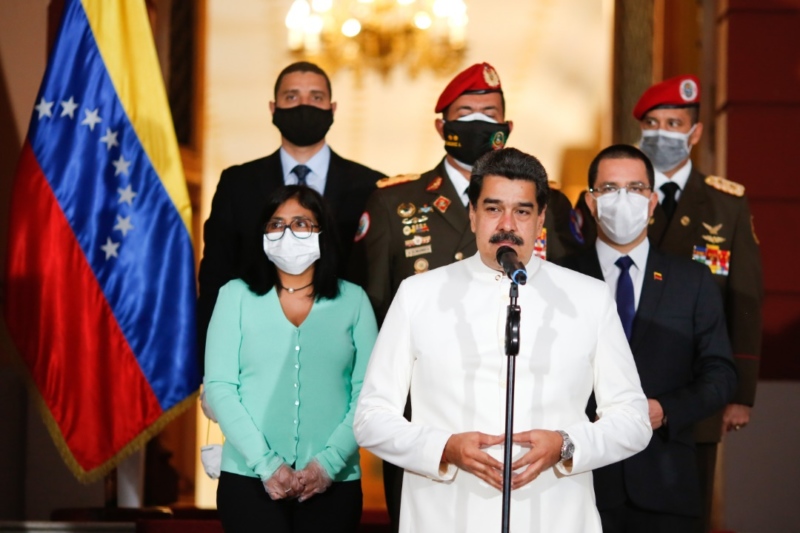 VP and presidential candidate Biden and Kamala Harris may need to get the memo on governance in Venezuela. Then they can invite blue state governors and mayors in the U.S. to a Zoom call about it… read on.

Note the U.S. is paying some salaries for medical workers.

The illegitimate Maduro regime wants Venezuelans to denounce their neighbors who are sick with COVID-19, calling them “bioterrorists.”

Nicolás Maduro’s National Bolivarian Armed Forces of Venezuela encouraged citizens to look for sick Venezuelans, saying a returning migrant “is a bioterrorist who puts everyone’s health at risk.” They also provided an email address and asked anyone with information to send them “the information of the person and their exact location” so the Maduro regime could detain them.

“They told us we’re contaminated, that we’re guilty of infecting the country,” Javier Aristizabal, a nurse from Caracas, told the New York Times. He said he spent 70 days in detention centers after he returned from Colombia in March.

Once these Venezuelans are detained, they are placed in unsafe containment conditions even if they do not display symptoms of COVID-19.

“In commandeered hotels, disused schools and cordoned-off bus stations, Venezuelans returning home from other countries in Latin America are being forced into crowded rooms with limited food, water or masks,” the New York Times reported. 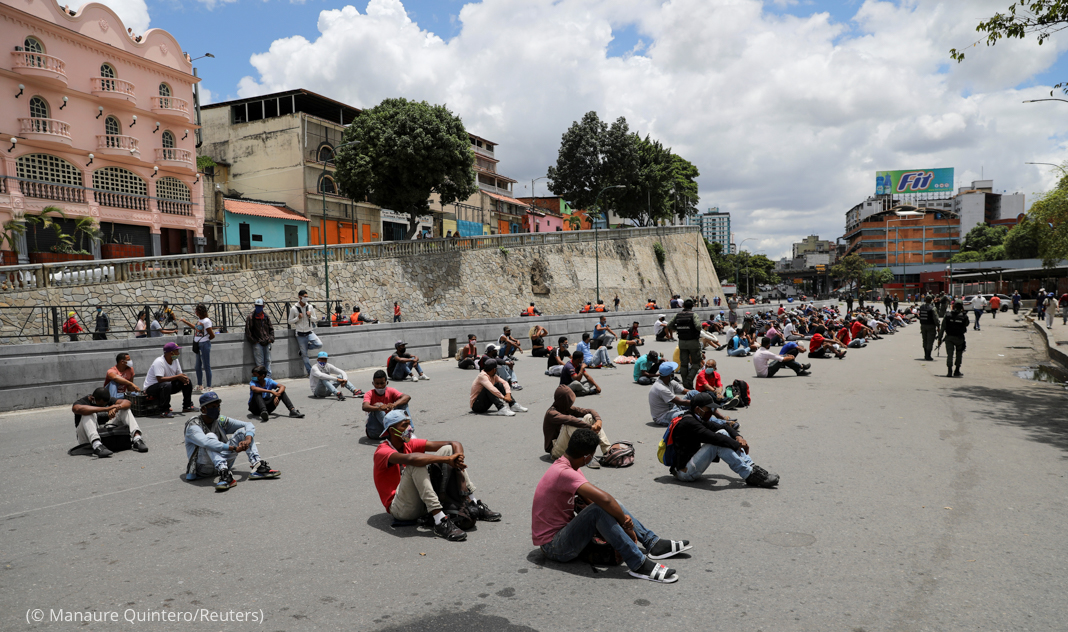 Venezuelans are placed in the middle of the street by security forces as punishment for disobeying social distancing measures August 5 in Caracas, Venezuela. (© Manaure Quintero/Reuters)

While the illegitimate regime continues to create more problems for Venezuelans during the pandemic, legitimate interim president Juan Guaidó and the legitimate government developed a program to help deliver better medical care to all.

The Héroes de la Salud program helps frontline health workers save lives by giving them the funds and resources they need to fight the virus, according to the National Assembly.

The interim Guaidó government recently accessed frozen funds with the support of the U.S. Treasury Department to pay the salaries of health care workers, providing close to $20 million for the program. Over 60,000 frontline doctors and nurses in Venezuela will receive $100 a month, considerably more than their pay under the Maduro regime.

The program is a recognition of the “men and women who save lives in the middle of an emergency, a pandemic and a dictatorship,” Guaidó said on Twitter, “so that we can continue fighting for the freedom of Venezuela. In the face of challenges, we are going to triumph.”

The experts issued a scathing, in-depth report on Wednesday that said the people responsible for crimes that include extrajudicial executions, enforced disappearances, arbitrary detentions and torture must be held to account, in part to ensure they don’t happen again.

The report was commissioned last year by the 47-member-state Human Rights Council, which has the backing of the United Nations,

The findings, based on nearly 3,000 cases that were investigated or examined, concluded that Maduro and his defense and interior ministers were aware of crimes committed by security forces and intelligence agencies. It further alleged that high-level authorities had both power and oversight over the forces and agencies, making the top officials responsible.

The report appeared likely to fan international and domestic criticism of Maduro’s government, which has overseen a country in tatters with runaway inflation, a violent crackdown and an exodus of millions of Venezuelans who have fled to neighboring countries to escape the turmoil since he took power in 2013.

Maduro’s government has come under increasing political pressure from the United States and dozens of other countries which consider politician Juan Guaidó the legitimate leader of Venezuela. Maduro has called this a plot to overthrow him so the U.S. can exploit Venezuela’s vast oil wealth.

Critics in other countries have already accused Maduro’s government of crimes against humanity. The 411-page report for the Human Rights Council represents an extensive look at rights violations in Venezuela and was based on interviews with victims, relatives, witnesses, police, government officials and judges, as well as videos, satellite imagery and social media content.

The authors said they did not receive responses from the government itself.

The experts — Marta Valinas of Portugal, Francisco Cox Vial of Chile, and Paul Seils of Britain — worked under a fact-finding mission the Geneva-based rights council set up last September to investigate alleged cruel, inhumane or degrading treatment and other human rights violations in Venezuela over the past five years

“These acts were committed pursuant to two state policies, one to quash opposition to the government and another to combat crime, including by eliminating individuals perceived as criminals,” Valinas told reporters. “We also consider that the documented crimes were committed as part of a widespread and systematic attack against the civilian population.”

“For these reasons, the mission has reasonable grounds to believe that they amount to crimes against humanity,” she said, noting the alleged arbitrary killings and systematic use of torture, in particular. “Far from being isolated acts, these crimes were coordinated and committed pursuant to state policies, with the knowledge or direct support of commanding officers and senior government officials.”

In the report, the experts said the violations took place amid a breakdown of democratic institutions, rule of law and judicial independence in Venezuela. They said the great majority of unlawful killings by security forces have not resulted in prosecutions and “at no stage have officials with command responsibility been brought to justice,” according to a summary of the findings.

Under Article 7 of the U.N. treaty establishing the International Criminal Court, a crime against humanity is defined as an act committed as part of a “widespread or systematic attack directed against any civilian population.”