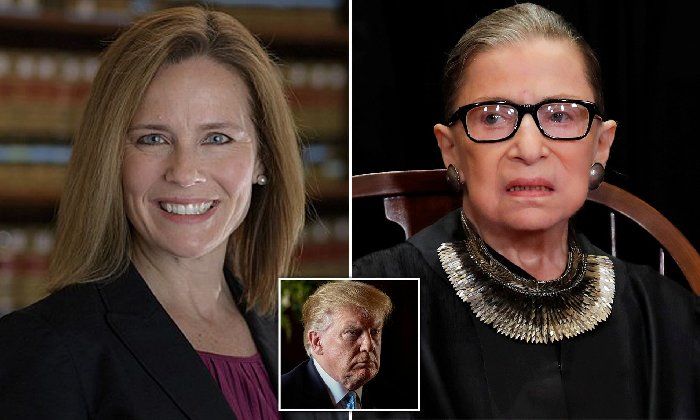 The late Howard Phillips, chairman of the Conservative Caucus, opposed the nomination of Ruth Bader Ginsburg, a former general counsel for the ACLU, to the Supreme Court. “Instead of defending the humanity and divinely imparted right to life of pre-born children,” Howard Phillips had warned, “she would simply be another vote for the proposition that our unborn children are less than human and that their lives may be snuffed out without due process of law, and with impunity.”

By any objective assessment, a big part of her legacy was continuing abortion on demand, which has now taken 60 million unborn lives since the Roe v. Wade decision of 1973. “RIP to the more than 30 million innocent babies that have been murdered during the decades that Ruth Bader Ginsburg defended pro-abortion laws,” said Rep. Doug Collins, who is also a military chaplain.

But only three Republican Senators voted to oppose the confirmation of this pro-abortion radical back in 1993. The three Senators, in that 96-3 vote, were Senators Jesse Helms (R-NC), Don Nickles (R-OK), and Bob Smith (R-NH).

Helms called her “a pleasant, intellectual liberal” but denounced her “outrageously simplistic and callous position” in favor of abortion and against the sanctity of human life. He said she spoke of “no qualification whatsoever” in support of abortion, saying it was a matter of “personal autonomy” and “the right to be let alone and to make basic decisions about one’s life’s course.” Helms went on, “Why…in the name of God did someone not ask, ‘But Mrs. Ginsburg, what about the unborn innocent and helpless child’s right to be left alone, that child who is about to be destroyed because of specious reasoning by people like Ruth Bader Ginsburg?’”

Her service to the abortion industry has been ignored by many commentators, including some on Fox News, who want to honor her personal career choices as a feminist. It’s truly terrible that she went through a disease. But she lived a long life and it’s also apparent that she tried to hang on to her seat on the Court for political reasons. She despised Trump.

Her long career stands in contrast to the unborn lives, mostly female, that were snuffed out by abortionists in a painful procedure that she personally sanctioned.

Worldwide, thanks to Ginsburg and others, the U.S. is third in abortions, behind Russia with 218 million and China with 401 million. Abortion was the leading cause of death in 2019, killing 42 million.

The late Phyllis Schlafly noted that Ginsburg was so extreme that she even wanted to write taxpayer funding of abortion into the Constitution.

Ginsburg also found another “right” that was in reality nowhere in the Constitution – gay marriage. Helms saw this coming, too, when he said that Ginsburg during her confirmation hearing that she was “likely to uphold the homosexual agenda.”

But it was mostly left to conservative leaders like Howard Phillips and Phyllis Schlafly — not Senate Republicans — to raise these concerns.

Looking at her confirmation hearing, Phyllis Schlafly asked, “How does it happen that a Supreme Court nominee whose only experience in private law practice was seven years as general counsel to the ACLU came to be praised by almost everyone as a ‘moderate’ and a ‘centrist’”? She answered, “My theory is: This just proves how easily men are fooled by a skirt. They deduced that Ruth Bader Ginsburg is ‘moderate’ because she isn’t a loud-mouthed, frizzy-haired, bra-burning, street demonstrator.”

The failure to recognize the danger of her nomination and legacy is relevant to what the Senate will do as President Trump nominates a successor. The propaganda barrage against the Republicans for moving ahead with Ginsburg’s replacement has already begun. Phillips and Schlafly have passed away, to be replaced by establishment conservative organizations like the Federalist Society and the Heritage Foundation to recommend judicial nominations.

Will they endorse a strong pick like Judge Barrett? Or will go for some “moderate” nomination, arguing this is the only way to get someone confirmed?

But Amy Coney Barrett was already confirmed by the Senate in a 55-43 vote to be a United States Circuit Judge for the Seventh Circuit. That means the vetting process can be shortened considerably. What’s more, Republican Senators Susan Collins and Lisa Murkowski voted for her. So did Democrats Joe Donnelly of Indiana, Tim Kaine of Virginia, and Joe Manchin of West Virginia.

It’s true that Barrett came under attack by Democratic Senator Dianne Feinstein because she is a faithful Catholic. But this is the kind of fight Republicans should welcome. It would be interesting to watch the “Catholic” Democratic Party presidential candidate Joe Biden oppose Barrett’s nomination.

For conservatives, Barrett is a woman who could serve as a real role model, in direct contrast to the radical feminism and ACLU activism that Ruth Bader Ginsburg will always be remembered for. This fight will offer the public an alternative to the notion that Ginsburg represents American women.

In a story about her life in Louisiana, a local paper noted that “her former New Orleans high school, St. Mary’s Dominican High School, named her their alumna of the year, recognizing Barrett ‘as a woman who instills Christian moral values while urging the practice of ethical behaviors as demonstrated through her dedication to family, public service or career.’”

One can anticipate Barrett being attacked by bigots opposed to her Christianity. For example, she will be attacked for her affiliation with People of Praise, described as a “tight-knit group” of conservative Christians.

Fox News, which was recently caught censoring a discussion of the role of billionaire George Soros in violent crime, ran a story about how Barrett had been “criticized” for her ties to the group when she was nominated by Trump for the Seventh Circuit. But it was the New York Times that led the criticism of Barrett based on her Christianity.

In terms of liberal and left-wing advocacy groups, the so-called Alliance for Justice will lead the opposition. the AFJ has received funding from the Susan Thompson Buffett Foundation associated with billionaire investor Warren Buffett and his family, and the Open Society Foundations associated with atheist George Soros.

Intervening in the unfolding contest, as if he’s the real presidential nominee, former president Barack Hussein Obama says Ginsburg “was a warrior for gender equality —  someone who believed that equal justice under the law only had meaning if it applied to every single American.”

But as Howard Phillips testified, her belief in “the extinguishment of innocent unborn human lives, without due process of law,” was not only inconsistent with “the plain language of the Constitution” but with “the revulsion toward abortion which prevailed at the time when our Constitution was drafted and ratified.”

The issue is straightforward and simple: does the Constitution protect our God-given right to life? Ginsburg was on the wrong side of this fundamental question. She did not in fact, believe the Constitution applied to “every single American.”

After 60 million abortions, it’s time to put human life in perspective in contemplating the legacy of “the legendary RBG.” In terms of killing, abortion makes coronavirus look mild by comparison. The abortion industry has spawned serial killers such as abortionist Kermit Gosnell and is so powerful that pro-life citizen journalists like David Daleiden have been investigated and prosecuted by politicians such as Kamala Harris for exposing the sale of aborted baby parts.

Perhaps in the afterlife, Ginsburg will be held accountable for the pain and suffering she inflicted on the innocent unborn. In the meantime, the Court needs a Christian judge willing to be guided by moral values. The choice is clear.