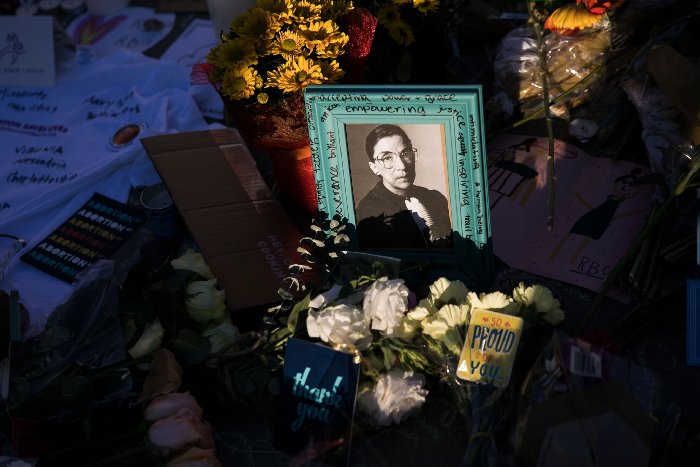 The New York Times headline, “As Nation Mourns Ginsburg, Trump Vows Nomination,” has two distortions. First, while many people are sorry to see her passing, the expression of deep sorrow is not something pro-life people would feel about someone whose rulings denied the humanity of the unborn. Second, the Times’ contrast of the “mourning” for Ginsburg with Trump’s vow to nominate a successor is designed to convey the notion that Trump is hard-hearted. But one could argue that “women’s rights,” as taken to an extreme by Ginsburg and other feminists, have been used to sanction the deliberate and savage murder of a human being.

Trump issued a “Proclamation on the Death of Ruth Bader Ginsburg” and visited the Supreme Court to pay respects. But Senator Jesse Helms called her “callous” toward the unborn when she was up for a confirmation vote in 1993. His warning wasn’t taken seriously by most fellow Senators. Indeed, he was one of only three to vote against her confirmation. Since then, 30 million abortions have taken place, making a total of more than 60 million since the Roe v. Wade decision of 1973.

Ginsburg, known as RBG, is being promoted by the Times as a cult figure, as a result of fighting sexist bias when she was on her career path. She did achieve her dream. The problem is that she denied the American dream to millions of Americans. Many cannot excuse or forgive her.

In her book, The Supremacists, Phyllis Schlafly noted that Ginsburg even endorsed funding of abortions as a constitutional right. That was too extreme for the Supreme Court, which rejected that idea in the 1980 decision, Harris v. McRae.

A major tragedy in the career of Ginsburg is her failure to understand the religious principles that she claimed to be following.

Liberal Fox News commentator Leslie Marshall said that Ginsburg, who was Jewish, “died on one of the holiest days in Judaism, Rosh Hashana, the Jewish New Year. One of the themes of the holiday suggests that very righteous people would die at the end of the year because they were needed until the very end.”

But Thomas Jacobson of the Global Life Campaign notes that while Ginsburg quoted the Torah on the duty to do justice, she contradicted the Torah by supporting “the innocent bloodshed of babies in the womb, violating the justice requirements of the Law of God and the U.S. Constitution.” He added, “In God’s eyes, our greatest national sin may be the innocent bloodshed of more than 61.3 million babies. Can you imagine standing before the Creator, Lawgiver, and Judge of the world and being held to account in part for that? It is our prayer that she did repent before her death, and received mercy and forgiveness from Jesus Christ.”

Randy Engel, the traditionalist Catholic writer and founder and director of the U.S. Coalition for Life, said, “One can always pray for her immortal soul and wish her the same merciful judgment that we all desire from God at our own death. However, I believe that judgment will likely be tempered by the ritual lack of mercy she showed to the millions of unborn children who met their untimely death under Roe v. Wade which Ginsburg faithfully worshipped.”

Trump’s Supreme Court nominee, of course, won’t be commenting directly on the Roe v. Wade decision which led to their deaths. The ruling will be treated as a “precedent” of the Court that a judge must address objectively. Yet, a recorded conversation with possible Trump nominee Judge Amy Coney Barrett about raising a family and adopting children makes the pro-life case. “What greater thing can you do than raise children?” she says. “That’s where you have your greatest impact in the world.”

A campaign has already been started to portray Barrett as a religious zealot with too many children and too devoted to “Catholic values.” As if that wasn’t enough, the media have “discovered” she belongs to a Christian group, and this has now become a “scandal.”

While commentators praise Ginsburg for her Jewish faith, Christian judges like Barrett,  a Notre Dame Law School alumna and member of the Law School’s faculty since 2002, are being opposed for having pro-life tendencies and favoring adoption over abortion.

Francis Boyle, a law professor at the University of Illinois, goes further, asking, “Has Barrett taken any kind of pledge that’s relevant to her being on the Court? She is being positioned for the Supreme Court to do a job and overturning Roe v. Wade will be part of it.”

He says that when he interviewed with Notre Dame Law School, which describes itself as the nation’s oldest Roman Catholic law school, he was told by the dean that law professors took a required pledge that they had to conduct themselves consistent with Catholic values, “which I took to mean I would not teach, write or advocate in favor of abortion rights.”

But even belonging to a pro-life group is grounds for suspicion. In 2018, Senator Kamala Harris, now the Democratic Party vice-presidential nominee, questioned whether Brian C. Buescher should be seated as a federal district judge because he was a member of the pro-life Catholic group the Knights of Columbus. (He was confirmed 51-40).

“Since the first century the Church has affirmed the moral evil of every procured abortion,” the Catholic Catechism declares. “This teaching has not changed and remains unchangeable.”

Harris’ running mate, Joseph Biden, claims to be Catholic but was denied communion at a Catholic church in South Carolina over his pro-abortion stance. The 2020 Democratic Party platform declares they believe in “safe and legal abortion” and full federal funding for Planned Parenthood, the nation’s largest abortion provider. It was founded by Margaret Sanger, a revolutionary socialist and anti-Christian activist who favored government programs to eliminate what she called “human weeds.”

Father James Altman, pastor of St. James the Less Catholic Church in La Crosse, Wisconsin, comments, “You cannot be Catholic and be a Democrat. Period. Their party platform absolutely is against everything the Catholic Church teaches. So just stop pretending that you’re Catholic and vote Democrat.  Repent of your support of that party and its platform or face the fires of hell.”

The Altman video, in which he seems to suggest that Catholics who vote Democrat will go to hell, has gone viral.

His popularity with traditional Catholics suggests that attacks on Barrett’s Catholic faith if she is the nominee, may backfire and drive more Catholics who take their faith seriously into the arms of President Trump.

One thought on “Should the Nation Mourn Ginsburg?”