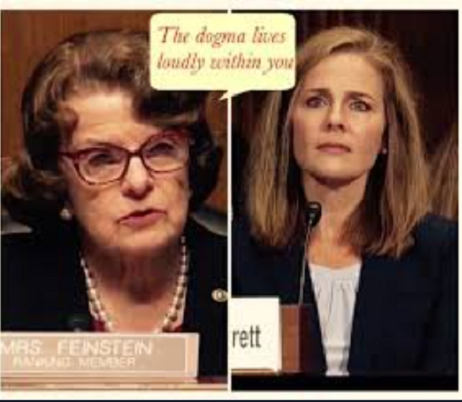 California Democrat Sen. and 2020 VP nominee on the “Harris-Biden” ticket Kamala Harris,, fresh from her epic character assassination attempt during the confirmation hearings for Supreme Court Justice Brett Kavanaugh, seems to have been designated the lead in trying to derail the Supreme Court nomination of 7th Circuit Judge Amy Coney Barrett. Harris’ partner in crime on the Senate Judiciary Committee, Sen. Maize Hirono of Hawaii, who plans to make her home visits by taxi after the Green New Deal kills airline travel, has said she will not meet with Barrett, lest her limited intellect be confused with the facts and she is unable to face the object of her anti-Catholic bigotry.

One of the talking points for this mob-in-waiting is Barrett’s membership in a Catholic lay group called People of Praise. Democrats call it a cult, but then that’s what many of them call the Catholic Church itself. Wherever two or more gather together in His name, many Democrats see a cult to be feared and hated.

But before they hated People of Praise, Democrats Harris and Hirono used a judicial confirmation hearing to attack another “cult” people might be more familiar with – namely the Knights of Columbus — Catholics are the sole remaining group that it is politically correct to slander and denigrate and nowhere is that clearer than in the consideration of nominees for court vacancies.

Democrats in the Senate, members of the so-called party of tolerance and diversity, are no longer hiding their anti-Catholic bigotry, putting it on display not long ago during the Christmas season confirmation hearing of  Omaha lawyer Brian C. Buescher, nominated by President Trump to represent the District of Nebraska on the United States District Court:

In the true spirit of the holiday season, Senators Kamala Harris (D-CA) and Mazie Hirono (D-HI) showed their true colors of bigotry and bias against Catholicism in a recent judicial confirmation hearing on Capitol Hill….

Buescher is also a long-time member of the Knights of Columbus, an iconic service group of nearly two million Catholics, worldwide, that recruits members for volunteer work and fundraising for charitable causes….

Originally founded in 1882, the Knights of Columbus started as a society benefitting poverty-stricken Catholic immigrants; now, the organization donates nearly 200 million dollars per year from approximately 15,000 chapters across twelve countries….

“Sen. Harris described the Knights as “an all-male society and asked if Buescher was aware that the Knights of Columbus “opposed a woman’s right to choose” and were against “marriage equality” when he joined,” the Catholic News Agency reported. 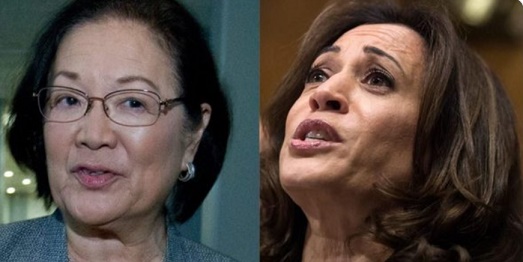 Of course, he is as is the Catholic Church… the Knights of Columbus were formed to serve in its religious and charitable functions. It is ironic that as the nation observed the birth of Jesus Christ, Democrats in the Senate were busy attacking the tenets of the church He founded, that life begins at conception, as did the life of Jesus, and ends at natural death and that marriage is a union of one man and one woman. But then it is typical of Democrats to respect lifestyles and not religious liberty and not believe that personal religious beliefs, as Buescher testified, can be kept separate from court decisions:

In response to a written question, per CNA, Buescher defended his judicial impartiality:

“…there is a difference between taking political positions as a candidate for elective office and serving as a federal judge. I believe a judge’s role and obligation is to apply the law without regard to any personal beliefs regarding the law.”

We saw the Democrats’ anti-Catholic bigotry on full display earlier with the confirmation hearing of Justice Amy Coney Barrett of the U.S. Court of Appeals for the 7th Circuit. Just as John F. Kennedy was said by some to be a stalking horse for the Vatican who would clear each major decision with the Pope, Barrett a practicing Catholic who actually gets it right was charged with embracing Catholic dogma so tight that there was no room left for the Constitution and those “emanations from a penumbra” that sanctified Roe vs. Wade. Catholic League President Bill Donahue addressed the issue on The Ingraham Angle on Fox: 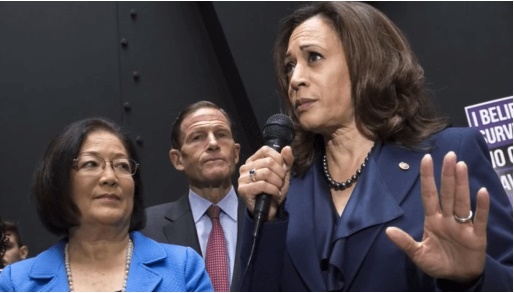 Note the use of the word “dogma” in a pejorative sense, as if the Catholic Church was a cult like the Druids chanting around a fire waiting for the human sacrifice to arrive. In fact, Barrett has in fact been slandered as a member of a cult which is in fact a legitimate Catholic faith group:

The Catholic Church is not a cult and neither is the Knights of Columbus a collection of all-male bigots despite the attempts by Harris, Hirono, Feinstein, Durbin, et al to portray them as such. The views and actions of the Knights of Columbus and non-cafeteria Catholics are no different than that of the twelve Apostles chosen by Jesus Christ to lead His ministry in the Catholic Church He founded despite the attempts of Democrats in the Senate to slander them and their adherents:

“This isn’t just about the Knights of Columbus or Catholics, this is an ongoing attack from the extremist left of the Democratic Party to silence people of faith and run them out of engaging in public service based on their religious beliefs,” Penny Nance, the president of Concerned Women for America, a Christian women’s activist group, said in a written statement.

“It is pure and simple religious bigotry,” Nance added….

“This is the kind of thuggish behavior we expect from third world dictators, not United States Senators,” Ken Blackwell, a former U.S. Ambassador to the United Nations Human Rights Commission, said in a statement. “That this attack on Catholics comes from the party of John F. Kennedy, who was proudly a Knight of Columbus, is particularly shocking and egregious. There should be no religious test in America, and I call on my Democratic friends to end this tactic of engaging in religious discrimination to destroy people nominated for public office.”

Indeed, what Senate Democrats are trying to impose amounts to a religious test for nominees by asking the McCarthyite question – are you now or have you ever been a practicing member of the Catholic Church?:

Sens. Mazie Hirono and Kamala Harris, in written questions to District Court judge nominee Brian Buescher, challenged his suitability for the bench because he belongs to this charitable Catholic group.  Hirono claimed that the Knights have taken “extreme positions” such as affirming Catholic belief in traditional marriage and even asked Buescher, “If confirmed, do you intend to end your membership with this organization to avoid any appearance of bias?”  In today’s Democratic Party, the new McCarthyism asks, “Are you now, or have you ever been, a member of the Knights of Columbus?” 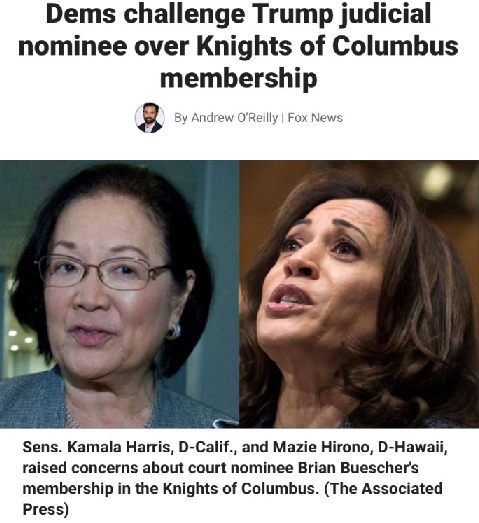 The Catholic Church and its doctrine, which dates back to the first Christmas, are “extreme?” The Knights of Columbus, known to conduct those conspiratorial conclaves known as pancake breakfasts, were founded in response to bigotry similar to that of Harris and Hirono.

Kathleen Blomquist, a spokeswoman for the Knights of Columbus, blasted the questions by Hirono and Harris as a throwback to past anti-Catholic rhetoric:

“Our country’s sad history of anti-Catholic bigotry contributed to the founding of the Knights of Columbus, and we are proud of the many Catholics who overcame this hurdle to contribute so greatly to our country,” she told the CNA.

Catholics like John F. Kennedy, a member of the Knights of Columbus. He would be ashamed of his party.

Watch out for Kamala Harris who, during the Kavanaugh hearings produced a doctored tape meant to make Kavanaugh look like a fool and a hypocrite and to slander his stellar reputation for integrity and honesty. She will say and do anything to derail Barrett just as she tried to derail Kavanaugh. As Breitbart reported:

Sen. Kamala Harris of California is being condemned for leading an attempt to smear Supreme Court nominee Brett Kavanaugh – this time with a deceptively edited video of a portion of his Senate confirmation hearings. The California Democrat tweeted an edited video of Kavanaugh’s response to Texas Sen. Ted Cruz’s questions about the judge’s 2015 dissent from denial of hearing en banc in the case of Priests for Life v. HHS…

However, Harris’s video was a sliced-and-diced version of Kavanaugh’s response to Cruz – which made it appear the nominee himself views contraceptives as “abortion-inducing drugs.”

“Kavanaugh chooses his words very carefully, and this is a dog whistle for going after birth control,” she posted. “He was nominated for the purpose of taking away a woman’s constitutionally protected right to make her own health care decisions. Make no mistake – this is about punishing women.”

“It’s clear that in his testimony to Senator Cruz, Kavanaugh was repeating the words that the plaintiffs had used in their own briefs. To say that because Kavanaugh accurately characterized the plaintiffs’ position he himself believes that contraceptives are abortion-inducing drugs demonstrates a complete misunderstanding of the Priests for Life litigation, as well as Kavanaugh’s testimony yesterday.”

The Democrats are coming with the ultimate affirmation of their bigotry – are you now or have you ever been a Catholic?