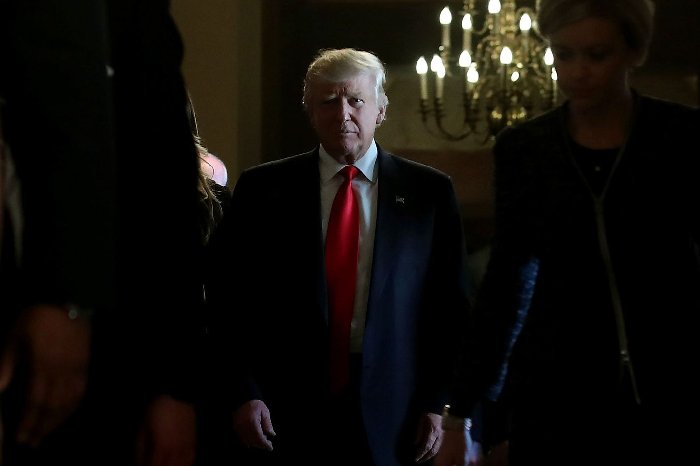 If President Trump wins the November election, it will be a miracle. But miracles happen. Former Trump Campaign Deputy Chairman Rick Gates says the “Trump Factor” could be even bigger this year and that the projected “Blue Wave” could end up in ruins.

If not, as the results come in, Trump will have to make the case in a national television address that the intelligence agencies have been misusing federal resources and government power for political purposes. He will have to argue that the election process has been subverted by the use of taxpayer and government resources to keep the Deep State in power. He will have to say that Big Tech companies, under the control of left-wing activists, abused their monopoly power under federal law to destroy the ability of his campaign to participate in a free and fair election.

With Trump, our last freely elected president in power, he will have no choice but to remain in the White House until the gross attacks on our democratic republic and our rights as free Americans come to an end.

These steps are necessary because, in my more than 40 years in Washington, D.C., I have never seen an alignment of forces like this mobilized against a freely elected president. This goes far beyond partisanship to subversion and treason.

The forces and personalities arrayed against Trump include China, Russia, the Vatican, the United Nations, the CIA, the FBI, Wall Street, billionaires such as George Soros and Mike Bloomberg, organizations such as the Council on Foreign Relations, the Democratic Party, and some in the Republican Party and the “conservative movement.”

As for the media, even Drudge and most of Fox News have turned against him.

Big Tech has always been an enemy of the president, but the suppression by Facebook and Twitter of New York Post revelations about Hunter Biden using his father to make business deals in China and Ukraine is unprecedented.

Personally, after attending one presidential debate, where various unidentified people were identified as disease-carriers, he has now survived the China virus. Previously, a would-be assassin, who was arrested with a loaded gun and a knife, mailed a letter with Ricin to the president. Pascale Ferrier was arrested with 234 rounds of ammunition at the “Peace Bridge” connecting the U.S. and Canada.

Ricin is a known KGB poison weapon used to kill dissidents in a communist system of government.

Trump is truly a dissident to the corrupt forces, known as the Deep State or the Swamp, dominating Washington, D.C. As to how this has happened, I have come to accept the view of the CIA’s legendary anti-communist mole-hunter James Jesus Angleton. He documented how intelligence officials are lost in a “wilderness of mirrors,” to use intelligence jargon, and outsmarted or even recruited by America’s enemies.

As a result, I concluded the Deep State is dominated by the remnants of the old Soviet KGB and that their headquarters is in Moscow, from which the Russian Revolution continues to spread its “errors,” as described in the Fatima revelations.

Dr. Paul Kengor’s book, A Pope and a President: John Paul II, Ronald Reagan, and the Extraordinary Untold Story of the 20th Century, documents how, on the anniversary of Fatima, the Soviets carried out the May 13, 1981, attempted assassination of anti-communist Pope John Paul II. Reagan’s CIA director Bill Casey confirmed the Soviet role, in the face of official CIA resistance to the finding.

A fan of Trump, the late Russian dissident Vladimir Bukovsky understood that Trump had nothing to do with the Russians. His book, Judgment in Moscow, describes how the Soviets/Russians manipulated the left for decades. Suddenly, however, the left “discovered” how Trump was supposed to be a Russian agent.

He told me in an interview shortly before his unexpected death, “For the first time, the left-wing establishment discovered the Russian threat. Previously, they didn’t see any threat. When it was real and we tried to attract the attention of the world to the Russian threat, we were accused of being paranoid and unrealistic and things like that. Now we have proven we were not paranoid. It did exist. Suddenly, the world discovers the Russian threat. That, of course, is a political game.”

In other words, the charges against Trump were disinformation, staged for partisan political purposes. As we know, one of their most successful disinformation themes was the phony Russia-gate dossier, paid for by Hillary Clinton and based on Russian sources.

Clearly, the Trump presidency has threatened powerful interests in government, corporations, and the media which are committed to the “convergence” of capitalism and communism through such mechanisms as “free trade” and involvement in global institutions.

Before the dossier disinformation, as I documented in The Sword of Revolution and the Communist Apocalypse,  was the so-called “Sino-Soviet split,” accepted by Henry Kissinger and the CIA to justify accommodation with the Red Chinese communists. Here, too, the evidence indicates the CIA has been completely infiltrated. Just consider a May 20, 2017, New York Times article about how the Chinese regime “systematically dismantled” CIA spying operations in the country starting in 2010, two years after Obama took power, “killing or imprisoning more than a dozen sources over two years and crippling intelligence gathering there for years afterward.” Another fruitless mole hunt took place.

With this background, the idea that former Trump National Security Advisor Michael T. Flynn was in any sense a Russian agent was undermined by the contents of his own book, The Field of Fight, arguing that Russia and China are behind an “enemy alliance” of countries and movements trying to destroy the U.S. That’s one of the reasons why he was targeted. He threatened to expose the Deep State’s faulty intelligence on geopolitics.

The search initially launched by Angleton led to such notorious characters as FBI counterintelligence special agent Robert P. Hanssen, a Soviet/Russian mole inside the bureau. His record of treason spanned 22 years, from 1979 to 2001. Robert S. Mueller, the Russia-gate special counsel, became FBI director after Hannsen was caught. Mueller then failed to reform the bureau to catch future spies.

Rep. Devin Nunes, the former chairman of the House Intelligence Committee, was most recently upset with revelations that CIA Director Gina Haspel is stonewalling the release of Obamagate documents. Obamagate is the scandal that involved the previous administration deciding to use the intelligence agencies to undermine the peaceful transfer of power to the Trump Administration. They produced the fake Russian dossier to do that.

Nunes, who wrote the conventional conservative book, Restoring the Republic, in 2010, now seems to understand that restoration is not possible without dismantling the structures and institutions captured by socialist and communist operatives.

These operatives, through favors or blackmail, pull the strings of the major media, in an ongoing intelligence operation that considers many journalists to be “Presstitutes,” or hired hands.

There was in fact a book by that name written by German journalist Udo Ulfkotte, who died under mysterious circumstances. He documents how journalists around the world echo the views of government and corporate officials belonging to such groups as the Council on Foreign Relations (CFR) and the Trilateral Commission.

It’s significant that pedophile Jeffrey Epstein, apparently armed with blackmail material in the form of videos of powerful people, was a member of both groups. He, too, died under mysterious circumstances. Epstein was found guilty of sex crimes in 2008 but remained a member of the CFR from 1995 through 2009. He was dropped from the rolls for nonpayment of dues and not because of sex crimes.

Cindy McCain, who says “We all knew what he [Epstein] was doing,” has endorsed Joe Biden for president. Her husband, the late Senator John McCain, who lost a winnable election against Obama in 2008, peddled the phony Hillary-financed Russian dossier to the FBI.

In the Flynn case, as you may recall, wiretapped conversations were illegally leaked to CIA mouthpiece and CFR member David Ignatius of The Washington Post.

The Deep State is an entity which overlaps with the military-industrial complex that was first identified publicly by another Republican president, Dwight Eisenhower.

Demonstrating the dangers of this cabal, the famous 1964 film “Seven Days in May” included a scenario where the top military brass revolt against their Commander-in-Chief. In the movie, the president wins. In real life, in 2020, we may soon find out.

In contrast to the movie version, the top military brass today are globalists, not nationalists. Many leave military service to serve on the boards of defense contractors. The Project On Government Oversight released a report finding that “from 2008 to the present over 380 high-ranking Department of Defense officials and military officers became lobbyists, board members, executives, or consultants for defense contractors within two years of leaving the Department.”

Hence, they oppose Trump’s decision to end foreign wars and pressure “allies” to spend more of their own money on their defense.

At this late date, intelligence agencies are stonewalling in response to his directive to release all classified documents on Obamagate. As if we needed more proof, it is apparent they don’t answer to Trump.

The opposition to Trump is already talking about his victory on election night being a “Red Mirage” that will dissipate with manufactured and fraudulent mail-in ballots.

In response, Trump will have to declare victory based on legitimate ballots and remain in power. The Supreme Court may be called upon to validate that victory by rejecting the stolen and manufactured votes. His opponents will call for a military coup to overthrow him.

All that Trump will have left is the people.