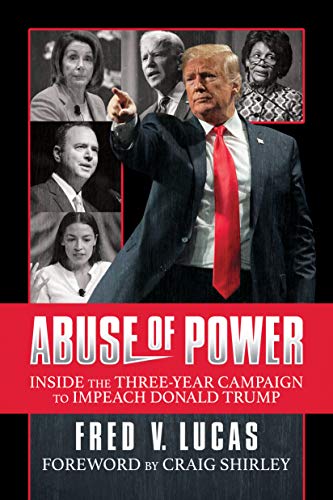 I have officially found a new author that I am adding to my ‘favorites’ list. His name is Fred Lucas. He has written a superb book entitled: Abuse of Power: Inside The Three-Year Campaign to Impeach Donald Trump. If you want the truth about what went on during the witchhunt to impeach Trump, this is the book. I can’t recommend it enough and I personally believe everyone should get a copy.

Just as I strongly suspected, President Trump’s enemies had a plan in place to remove him even before he was inaugurated. Leftists could not stand the way the election turned out and how Hillary Clinton lost, so they implemented a strategy to bring a sitting president down in a soft coup. That coup had many facets, but the impeachment angle was one of the key elements of their plan. The hit job culminated in an election-year impeachment trial.

In the beginning… of the impeachment, per Lucas:

“And I document this in there that one of the first actions taken was [Sen.] Elizabeth Warren actually put forward a Senate bill on emoluments saying that Trump would be committing a high crime or misdemeanor if he did not divest all of his business holdings immediately. That bill went nowhere, but it was sort of symbolic.”

“From that point on, you had [Rep.] Maxine Waters pushing forward … what she called the “Impeach 45” movement. It had like a whole host of liberal nonprofits such as Tom Steyer, John Bonifaz, who ran this group Impeach Donald Trump Now.”

“So these things are all in place, eventually, after the inauguration and they continued, people were pressing.”

You’ll be shocked to know that all of those who were gunning for Trump are Marxists and they are still key players as presumptive President-elect Biden gets ready to finish stealing the election. When they could not prevent Trump from being elected and then could not remove him once he became president, the left vowed they would not let him be reelected. It is my opinion that they rigged the election nine ways from Sunday. Does anyone really believe that Joe Biden received 15 million more votes than Barack Obama?

Lucas envelops you in the history of previous impeachments. Then he takes apart the impeachment charges against President Trump. His research is meticulous and fascinating. It’s political insider baseball.

He explains that all impeachments have occurred during a culture-war. Impeachment was always meant to be a difficult endeavor, not to be taken lightly, and definitely not to be used as a political weapon. But that is exactly what the Democrats did. Fortunately, they were unsuccessful. The Trump impeachment stands out because the previous three presidential impeachment inquiries were all based on actual alleged violations of the law. Trump’s wasn’t.

The author is an actual reporter who covered the White House and did a great job of it. Lucas is an endangered species… he factually reports the news. He is also an award-winning journalist who has written and reported for The Daily Signal, Fox News, Newsmax, TheBlaze, Townhall, The Washington Examiner, The Federalist, The National Interest, History Magazine Quarterly, The American Spectator, The American Conservative, and other outlets.

Lucas was at the forefront of Trump’s impeachment proceedings. He tells a must-read story of what occurred during the hearings and what surrounded them. He gives you excellent research and a historical backdrop that provides you a great deal of insight into what transpired… in effect, it was a massive abuse of power.

You can purchase a copy of Abuse of Power: Inside The Three-Year Campaign to Impeach Donald Trump on Amazon.