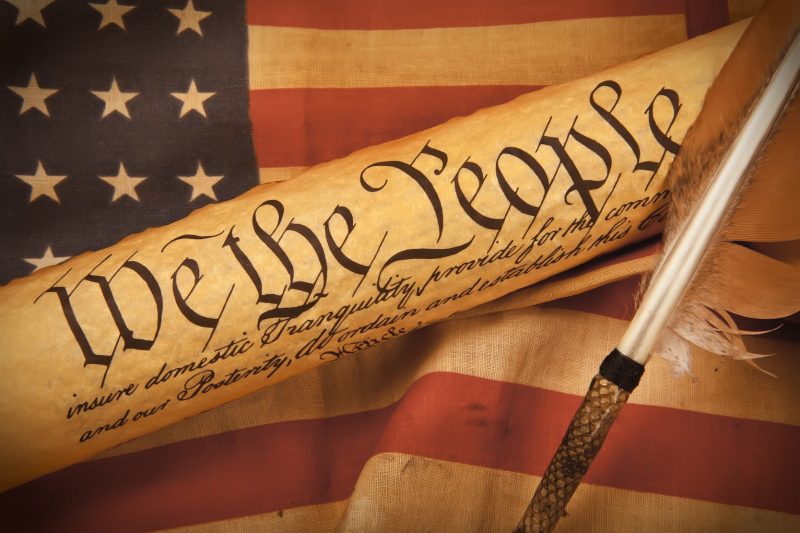 Here is the interview Alex Newman of The New American Magazine and I did on December 23.

As pointed out in the interview [and previously here], Art. I, §4, cl. 1, US Constitution, delegates to state and federal legislatures alone the power to make the laws addressing the “times, places and manner” of conducting federal elections.  In addition, Art. II, §1, cl. 2 provides that the State Legislatures are to decide how the Presidential Electors for their State are to be appointed.

But in Pennsylvania (and other States), Judges and State Executive Branch officials changed the laws made by their State Legislature in order to permit fraud of such a massive scale as would enable the theft of the election for the Biden/Harris ticket.  Accordingly, during late September, the Republican Party of Pennsylvania filed a lawsuit challenging the unconstitutional changes to the State election laws. They lost in the Pennsylvania Supreme Court and asked the US Supreme Court to review it.

But the Supreme Court dragged its feet.  So on October 28, Justice Alito (who is the “go-to” Justice for the US Circuit in which Pennsylvania is located), issued a statement [link] where he identified violations of Art. I, §4, cl. 1 and Art. II, §1, cl. 2 as an issue of “national importance” which “calls out for review” by the Supreme Court; and that the Court should decide this issue BEFORE the election.  He warned that the Supreme Court’s inaction on the “important constitutional issue” raised in the lawsuit has created conditions that could lead to “serious post-election problems.”

Justices Thomas and Gorsuch joined Justice Alito in his Statement – but nobody else.

The Supreme Court still hasn’t announced whether they will review the decision of the Pennsylvania Supreme Court. They set this case for conference (among themselves) on January 8 [link] – which is two days after Congress meets to count the votes.

The Supreme Court’s handling of the Texas lawsuit was equally egregious.  The Texas case alleged that using COVID-19 as an excuse, state government officials in Pennsylvania, Georgia, Michigan, and Wisconsin usurped their State Legislature’s authority and unconstitutionally revised their State’s election statutes.  These changes made massive election fraud possible.  The Complaint sets forth compelling facts alleging the massive and coordinated fraud used to steal the November 3 election.

But the Supreme Court refused to hear the case, claiming that Texas “lacked standing” to bring the action.  They were dead wrong.  Here’s why:

The essence of a “Republic” is that sovereign power is exercised by representatives elected by The People.1   Accordingly, the violations of Art. I, §4, cl. 1 and Art. II, §1, cl. 2 – which made the massive election fraud possible – strike at the heart of our Constitutional Republic.

Obviously, when an election is stolen by corrupt politicians and political parties – with the connivance of Judges and State election officials – the Right of The People to choose their Representatives is taken away from them.

And this is why the State of Texas has “standing” to bring the lawsuit: Art. IV, §4, is for the benefit of the States who comprise this Union. The States created the federal government when they ratified the Constitution.  The Supreme Court is merely the “creature” of that Constitution, and they may not lawfully act in contravention of the Document under which they hold their existence.

The US Supreme Court is required to act so as to preserve the Republican Form of Government for Texas and all other States.   They shirked their Duty.  Shame on the Supreme Court!

Article IV, §4 also imposes on the US Attorney General – as part of the Executive Branch of the federal government – the Duty “to guarantee to every State in this Union a Republican Form of Government…”

Accordingly, the Attorney General has the Duty to prosecute persons engaged in federal election fraud; and he has the Duty to file civil actions addressing the election fraud – such as suggested by constitutional litigators William J. Olson & Patrick M. McSweeney in their Christmas Eve article here.

But not only did Barr not lift a finger to fight the fraud – he denied there was any fraud. He too shirked his constitutional Duty.  Shame on William Barr!

Article IV, §4 also imposes on Congress the Duty to guarantee to the States a Republican Form of Government.

Section 3 of the 20th Amendment imposes on Congress the additional Duty of determining whether the President-Elect and Vice President-Elect have “qualified” for office [respecting that, this short post will help you].

Congress has the ability to perform its sacred Duty under Art. IV, §4, by disqualifying Biden and Harris on the basis that their election was procured by changes to State election laws made in violation of Art. I, §4, cl. 1 and Art. II, §1, cl. 2, which made possible the brazen fraud which resulted in the theft of the election for Biden and Harris.

Kamala Harris should be disqualified on the additional ground that she is not a “natural born citizen” as required by Art. II, §1, cl. 5 and the 12th Amendment [link].

But shockingly, it appears that some Republicans in Congress intend to go along with the fraud, and will use as an excuse the silly claim that presidential elections are up to the States and Congress shouldn’t bully the States!

But that would constitute aiding and abetting of election fraud, and a shirking of Constitutional Duties.  Congress!  Do not strip The American People of their right to honest federal elections!

This is an Insurrection against the sovereign power of WE THE PEOPLE. Traitors within our local, state, and federal governments have conspired with one another – and apparently foreign agents – to take our sovereign power away from us.  And cowards are going along with it.

If, when it meets on January 6, Congress too shirks its constitutional Duty to guarantee honest federal elections and refuses to disqualify Biden & Harris; then the President is our last hope (within the purview of the Constitution). 3 Not only does Art. IV, §4 impose this duty on the President; he is also bound by his Oath of Office to “preserve, protect and defend the Constitution of the United States” (Art. II, §1, last clause); and, by Art. II, §3, to “take Care that the Laws be faithfully executed”.  These three provisions impose upon him the duty to act so as to preserve the Federal Constitutional Republic created by our Constitution of 1787.

And he has the constitutional and statutory authority to carry out his Duty:

Call up the Militia!

…“to provide for calling forth the Militia to execute the Laws of the Union, suppress Insurrections and repel Invasions;” [italics added]

Congress “provided for” calling forth the Militia by delegating to the President the authority to use his own judgment respecting whether to send the Militia into any State:

So the Militia may be called forth:

A Brief History of the Militia

The term, “Militia”, refers to the armed and trained male Citizens.  The Militia Act of 1792 provided for the arming and training of these male Citizens [link]. Our Framers did not want a standing professional Army – that’s why appropriations for the regular Army were limited to two years (Art. I, §8, cl. 12).  Enforcement of federal laws, suppression of Insurrections, and much of the national defense were to be the responsibility of the Militia.  When the federal gov’t needs to enforce its laws, it is to call forth the Militia – the armed and trained Citizens – to do the enforcing!   During the Washington Administration, the federal gov’t called forth the Militia to enforce the federal excise tax on whiskey. Federal law enforcement is thus the province of the Citizens – the Militia! 4

But with the Dick Act of 1903, the organized Militia was converted into the National Guard – which is an adjunct of the federal military.  And with 10 USC § 246, Congress redefined “Militia” to consist of two classes:

“(b) The classes of the militia are—

(1) the organized militia, which consists of the National Guard and the Naval Militia; and

Earlier this year, in response to the violent Insurrections in the cities, Edwin Vieira, JD., Ph.D. (our Country’s foremost authority on the Militia) showed here how President Trump has the authority to send the Militia into the cities to suppress the Insurrections.  But as discussed here [at endnote 11], President Trump’s two previous Secretaries of Defense apparently indicated that they would not obey orders to send the National Guard into the cities.  Will Chris Miller, the present acting Secretary of Defense, be any better?

I implore Patriots to become precise in their use of terminology.  Calling up the Militia for the purposes at Art. I, §8, cl. 15 is not “imposing martial law” [and it’s not “Marshall law”]!  Martial Law is typically imposed during wartime when invading military forces disband civilian governments [including the courts] in the occupied country and replace the civilian government with direct military control of civilian populations.

The “rule of law” is a term which politicians and Attorneys General, who have no idea what it means, love to sling around:  In his recent address to students at Hillsdale College, former Attorney General Barr said the “rule of law” means “treating everyone the same”. That’s not even close.

It doesn’t matter what you or I think of President Trump: there is much to criticize about his policies.  This fight is about whether our Republican Form of Government, with honest & verifiable elections, is to be restored; or whether our Right to choose our Representatives is to be stripped from us forever.

1 Federalist No. 10 (J. Madison) [link]: “A republic, by which I mean a government in which the scheme of representation takes place, … *** … The two great points of difference between a democracy and a republic are: first, the delegation of the government, in the latter, to a small number of citizens elected by the rest; …”

2 “…The fabric of American empire ought to rest on the solid basis of THE CONSENT OF THE PEOPLE. The streams of national power ought to flow immediately from that pure, original fountain of all legitimate authority.”  Federalist No. 22, last para (A. Hamilton).  This is what we will lose if Congress and the President permit the cheats and subversives to get away with the election fraud.

3 If Congress and the President both shirk their Constitutional duties and “betray their constituents, there is then no resource left but in the exertion of that original right of self-defense …” Federalist No. 28 (A. Hamilton).  Much blood will be on the hands of those who acquiesced in the fraud.

4 Not armed thugs from federal executive agencies such as the FBI, BATF, etc., etc., etc.!