But there already is a domestic terrorism law… meanwhile it was not applied to BLM or ANTIFA as those protests still go on… .just a few arrests have been made while people and small businesses were not only terrorized but hundreds or maybe thousands lost their businesses. It is okay, however, as VP -Elect Kamala Harris is good with that and supported it all.

Just one day ago –> it is terrorism but they call it unlawful assembly.

Portland police arrived on the scene and told the crowd it had declared an unlawful assembly.

We’re aware of a direct action event outside the Justice Center tonight calling for demonstrators to “spread fire.” We will not tolerate criminal activity that jeopardizes or threatens the safety of deputies, officers, adults in custody, employees and community members.

So why the new proposed legislation? Hardly balanced application of the law and that is good with the new administration and progressive members of Congress.

The Patriot Act 2.0 coming your way.

“The rising tide of domestic terror across our country, particularly from violent far-right extremists and white supremacist organizations, demands a response from Congress,” said Schneider. “It is not enough to just condemn hate, we need to equip law enforcement with the tools needed to identify threats and prevent violent acts of domestic terrorism. The Domestic Terrorism Prevention Act improves coordination between our federal agencies and makes sure they are focused on the most serious domestic threats. I thank Chairman Nadler and Chairwoman Bass for their leadership on this issue and my colleagues on both sides of the aisle for supporting this legislation in markup. I look forward to building support for a vote by the full House as soon as possible.”

The Domestic Terrorism Prevention Act of 2020 would enhance the federal government’s efforts to prevent, report on, respond to, and investigate acts of domestic terrorism by authorizing offices dedicated to combating this threat; requiring these offices to regularly assess this threat; and providing training and resources to assist state, local, and tribal law enforcement in addressing it.

According to the Anti-Defamation League, in 2019, domestic extremists killed at least 42 people in the United States in 17 separate incidents. This number makes 2019 the sixth deadliest year on record for domestic extremist-related killings. Last year, a Trump Administration Department of Justice official wrote in a New York Times op-ed that “white supremacy and far-right extremism are among the greatest domestic-security threats facing the United States. Regrettably, over the past 25 years, law enforcement, at both the Federal and State levels, has been slow to respond.”

H.R. 5602 would authorize three offices, one each within the Department of Homeland Security (DHS), the Department of Justice (DOJ), and the Federal Bureau of Investigation (FBI), to monitor, investigate, and prosecute cases of domestic terrorism. The bill also requires these offices to provide Congress with joint biannual reports assessing the state of domestic terrorism threats, with a specific focus on white supremacists. Based on the data collected, H.R. 5602 requires these offices to focus their resources on the most significant threats..

The legislation has more than 100 co-sponsors in the House. A Senate companion bill is led by Sen. Dick Durbin (D-IL).

On March 23, the Reichstag passed the Enabling Act, the partner piece of legislation to the February 28 Decree for the Protection of People and State. The Enabling Act assigned all legislative power to Hitler and his ministers, thus securing their ability to control the political apparatus. When President Hindenburg died in August 1934, Hitler wrote a new law that combined the offices of president and chancellor. It was sanctioned by a national plebiscite. 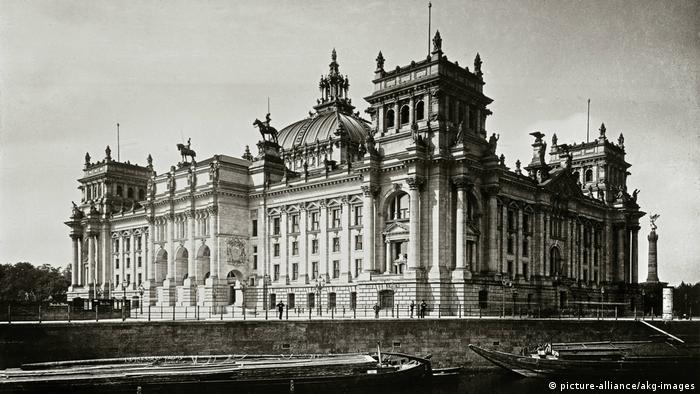 When the German parliamentary building went up in flames, Hitler harnessed the incident to seize power

Smithsonian: It was the canary in the political coal mine—a flashpoint event when Adolf Hitler played upon public and political fears to consolidate power, setting the stage for the rise of Nazi Germany. Since then, it’s become a powerful political metaphor. Whenever citizens and politicians feel threatened by executive overreach, the “Reichstag Fire” is referenced as a cautionary tale

Germany’s first experiment with liberal democracy was born of the 1919 Weimar Constitution, established after the conclusion of World War I. It called for a president elected by direct ballot, who would appoint a chancellor to introduce legislation to members of the Reichstag (who were also elected by popular vote). The president retained the power to dismiss his cabinet and the chancellor, dissolve an ineffective Reichstag, and, in cases of national emergency, invoke something known as Article 48, which gave the president dictatorial powers and the right to intervene directly in the governance of Germany’s 19 territorial states.

Following a stint in jail for his failed Beer Hall Putsch in 1923, Hitler poured his energy into attaining power through legal channels. He rose to the head of the National Socialist German Workers’ Party (Nazis), and by 1928 the group’s membership exceeded 100,000. The Nazis denounced the Weimar Republic and the “November criminals,” politicians had signed the Treaty of Versailles. The treaty forced Germany to accept responsibility for World War I, pay huge remunerations, transfer territory to their neighbors and limit the size of the military.

Despite its considerable growth, the Nazi party won only 2.6 percent of the vote in the 1928 election. But then the Great Depression hit, sending the U.S. and Europe into an economic tailspin and shooting the number of unemployed up to 6 million people in Germany (around 30 percent of the population). The sudden slump caused massive social upheaval, which the Nazis exploited to gain further political traction. By 1930, the Nazis won 18.3 percent of the Reichstag vote and became the second largest party after the Social Democrats, while the Communist party also grew to ten percent of the vote.

The economic unrest of the early 1930s meant that no single political party had a majority in the Reichstag, so fragile coalitions held the nation together. Faced with political chaos, President Paul von Hindenburg dissolved the Reichstag again and again. Frequent elections followed.

The Nazis aligned with other right-leaning factions and gradually worked their way up to 33 percent of the vote—but were unable to reach a full majority. In January 1933, Hindenburg reluctantly appointed Hitler as chancellor on the advice of Franz von Papen, a disgruntled former chancellor who believed the conservative bourgeois parties should ally with the Nazis to keep the Communists out of power. March 5 was set as the date for another series of Reichstag elections in hopes that one party might finally achieve the majority.

Meanwhile, the Nazis seized even more power, infiltrating the police and empowering ordinary party members as law enforcement officers. On February 22, Hitler used his powers as chancellor to enroll 50,000 Nazi SA men (also known as stormtroopers) as auxiliary police. Two days later, Hermann Göring, Minister of the Interior and one of Hitler’s closest compatriots, ordered a raid on Communist headquarters. Following the raid, the Nazis announced (falsely) that they’d found evidence of seditious material. They claimed the Communists were planning to attack public buildings.

On the night of February 27, around 9:00, pedestrians near the Reichstag heard the sound of breaking glass. Soon after, flames erupted from the building. It took fire engines hours to quell the fire, which destroyed the debating chamber and the Reichstag’s gilded cupola, ultimately causing over $1 million in damage. Police arrested an unemployed Dutch construction worker named Marinus van der Lubbe on the scene. The young man was found outside the building with firelighters in his possession and was panting and sweaty.

“This is a God-given signal,” Hitler told von Papen when they arrived on the scene. “If this fire, as I believe, is the work of the Communists, then we must crush out this murderous pest with an iron fist.”

A few hours later, on February 28, Hindenburg invoked Article 48 and the cabinet drew up the “Decree of the Reich President for the Protection of the People and State.” The act abolished freedom of speech, assembly, privacy and the press; legalized phone tapping and interception of correspondence; and suspended the autonomy of federated states, like Bavaria. That night around 4,000 people were arrested, imprisoned and tortured by the SA. Although the Communist party had won 17 percent of the Reichstag elections in November 1932, and the German people elected 81 Communist deputies in the March 5 elections, many were detained indefinitely after the fire. Their empty seats left the Nazis largely free to do as they wished.

Later that year, a sensational criminal trial got under way. The accused included van der Lubbe, Ernst Torgler (leader of the Communist Party in the Reichstag) and three Bulgarian Communists.

As the trial in Germany proceeded, a different kind of trial captured the public discourse. Willi Münzenberg, a German Communist, allied himself with other Communists to undertake an independent investigation of the fire. The combined research resulted in the publication of The Brown Book on the Reichstag Fire and Hitler Terror. It included early accounts of Nazi brutality, as well as an argument that van der Lubbe was a pawn of the Nazis. Hitler’s party members were the real criminals, the book argued, and they orchestrated the fire to consolidate political power. The book became a bestseller, translated into 24 languages and sold around Europe and the U.S.