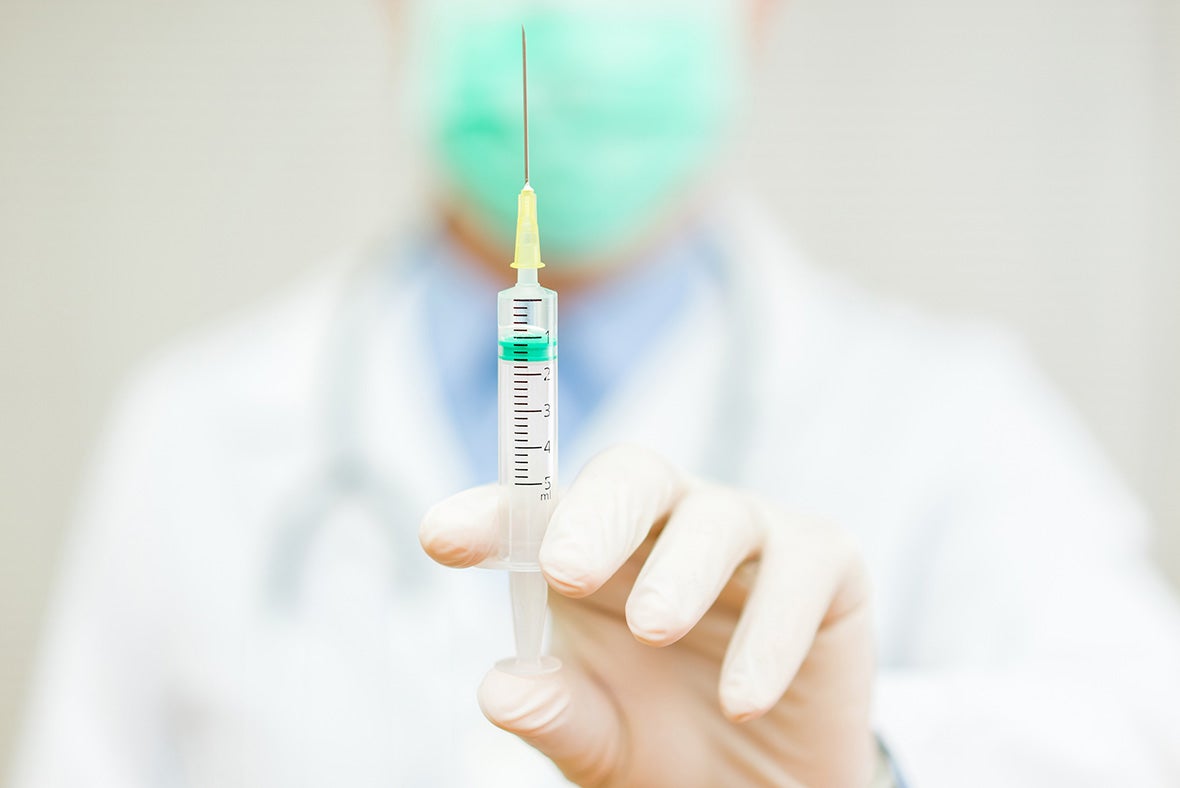 I’m astounded by the number of die-hard Trump supporters who reject the former president’s advice on vaccines. Trump told Maria Bartiromo, “I would recommend it, and I would recommend it to a lot of people that don’t want to get it, and I lot of those people voted for me frankly. But again, we have our freedoms and we have to live by that and I agree with that also. But it’s a great vaccine, and it is a safe vaccine and it is something that works.”

The former president does not believe the China virus is a hoax or a fraud. He knows it’s real because he got it. He and his wife also got the vaccine.

In my opinion, you are playing Russian roulette if you don’t get a vaccine. By the way, the Russians know the virus is dangerous. Russian President Putin is getting his vaccine on Tuesday. Russia has produced three vaccines.

Please note that Senator Rand Paul has argued with Dr. Fauci over masks, but he supports the vaccine. He doesn’t need it, saying, “It is inappropriate for me – who has already gotten the virus/has immunity – to get in front of elderly/healthcare workers.” He said the same goes for AOC or any young healthy person.

His point is that if you don’t get the disease, get the vaccine. On the other hand, Trump got the disease and the vaccination as well. He wanted an additional guarantee of immunity.

Trump knows this is a dangerous virus that was made in a Chinese lab under military control. They are engaged in biological warfare against our people.

The question for many is what they fear most. Some don’t trust Fauci, Gates, or Big Pharma. But others fear the virus more. Count me among the latter. I don’t necessarily trust the medical or scientific establishments but I also don’t trust the Chinese Communist Party and its military establishment. I believe they tried to poison the world, for the purposes of defeating Trump and destroying the economies of the West.

I do trust the first-person accounts of people, like Trump, who have gotten the Covid-19 disease. Clearly, this isn’t ordinary flu.

Consider sources like the GOP Doctors Caucus in the House, composed of 18 medical providers who utilize their medical expertise and backgrounds to develop patient-centered health care policy. They are not lackeys of Fauci or Gates. They SUPPORT the China virus vaccine.

In fact, three of them, Andy Harris, Greg Murphy, and Mariannette Miller-Meeks,  said in a recent op-ed that “vaccination, particularly for the most vulnerable Americans, is the surest way for us to overcome the Covid-19 crisis. As physicians, we celebrate the light at the end of the tunnel, in large part due to Operation Warp Speed.” That was President Trump’s project.

The GOP Doctors Caucus vouches for the safety of the vaccine. These doctors are not lapdogs for the Great Reset. They are trying to save lives.

If you get the disease, convinced the deaths have been inflated and that it’s comparable to the common cold, be prepared for whatever happens next. Be prepared for the possibility that before you get sick or die you could spread the disease to your family and friends.

Those who say the vaccine isn’t a real vaccine are missing the point. As Trump says, it “works” like a vaccine. However, it is experimental and authorized for emergency purposes. There is a risk in taking it. You have to sign several pages of warnings before you get the shot. I did so.

As the founder of a group once called the Committee to Protect Medical Freedom, I have always been skeptical of some vaccine claims. Vaccines have been taken off the market because of their dangerous side effects. Some injure and kill people. Some are made from controversial ingredients, including aborted baby tissue. I held a national news conference years ago to oppose a mandatory HIV/AIDS vaccine.  I have posted several videos about vaccine dangers and continue to be skeptical of government policy dictating that every child get 69 doses of 16 vaccines, some with controversial chemical ingredients.

There is a reason why there is a federal National Vaccine Injury Compensation Program to compensate victims of vaccines. Big Government is protecting Big Business from liability for their products.  That being said, some vaccines are absolutely necessary for human health in general.

What is fascinating in this case is the attitude of Trump, who said during the 2016 campaign that he would not automatically reject the notion that vaccines were linked to rising rates of autism. Trump said that he was “totally in favor of vaccines” but favored “smaller doses over a longer period of time.” Dr. Ben Carson agreed, saying, “It is true that we are probably giving way too many in too short a period of time. And a lot of pediatricians now recognize that, and, I think, are cutting down on the number and the proximity in which those are done, and I think that’s appropriate.”

The unique circumstances of the China virus include that it came from a country run by a murderous dictatorship during an American election year. The timing is important. There’s no doubt the Democrats used the virus as an opportunity to do what the Chinese wanted to do – arrange the election in such a way to depose Trump. The former president, with access to classified information, clearly understood what was going on and decided that “Operation Warp Speed” was the only way out. He was also consistently warning about Democratic Party efforts to fix the election against him

Many religious leaders typically opposed to using vaccines based on fetal cells have changed their minds in this case. I think the reason is they genuinely fear the virus more than the vaccine. The virus is the greater danger to human health in the long run. They hold China responsible but don’t want to do so in a public manner.

If you think Chinese dictator Xi Jinping’s military was just experimenting with a variation of the flu in that Wuhan lab, you have a right to believe that. But don’t count me among those who give the regime the benefit of the doubt. And there really isn’t any doubt left. The only serious question is whether it leaked out of a lab by accident or was released on purpose. The effect is still the same. What’s debatable is the nature of the virus and why the effects vary widely, such as canceling out the sense of smell and taste, and why it creates so many variants.

By any objective measure, the China virus is more deadly than the ordinary flu. But even if the death rates do slow down, the question about the China virus from the beginning has been how dangerous and lethal it could become. Nobody knew, except perhaps the Chinese, and they weren’t saying.

The claim that the virus is killing people who would die anyway from other causes is morally objectionable and contemptible.

None of this justifies the draconian lockdowns of most of the American population. On the other hand, what’s happening in America is not “fascism,” as left-wing feminist Naomi Wolf claimed during an appearance on Russia state-funded TV. (She is one of several left-wing guests who have recently been appearing on Tucker Carlson’s Fox show as well). This is old-fashioned Marxism and America is now at the mercy of a one-party Marxist state, with the major means of communication under the effective control of that regime and covering for China.

That’s essentially what federal Judge Laurence Silberman was saying in a dissent in a defamation case, in which he referred to the “ideological consolidation of the press” in America. He added that “ideological homogeneity in the media — or in the channels of information distribution — risks repressing certain ideas from the public consciousness just as surely as if access were restricted by the government.” He named major media as well as Silicon Valley.

What we have seen in this regard in the China virus case is a willingness by these organs to ignore the role of the Communist Chinese regime in creating or letting loose this pandemic on the world. That’s the key point many conservatives are missing.

The latest example is coverage of the mass shooting in Atlanta involving some Asian women working at a spa providing massages. It had nothing to do with their Asian heritage and more to do with the killer’s sex addiction. Yet, Democratic Rep. Jerrold Nadler blamed the attacks on “political leaders who have demonized China.” This is from the Marxist playbook. Such lunacy gets attention from state media in the U.S. that want to get back to business as usual with the regime.

At the recent meeting with Chinese communist leaders, Secretary of State Antony Blinken said the U.S. has “deep concerns with actions by China, including in Xinjiang [an area of Uyghur unrest],  Hong Kong, Taiwan, cyber-attacks on the United States, and economic coercion toward our allies. Each of these actions threatens the rules-based order that maintains global stability.”

As if this list wasn’t bad enough, Blinken didn’t say one word about the China virus and the Wuhan lab.  (Blinken accepted Chinese money when he ran the “Biden Center” at the University of Pennsylvania.)

Take the vaccine or not and then accept the consequences. But don’t lose sight of the fact that the fingerprints of the Communist regime are all over this virus and the corpses around the world that are piling up because of it.

One thought on “Fear the Virus or the Vaccine?”