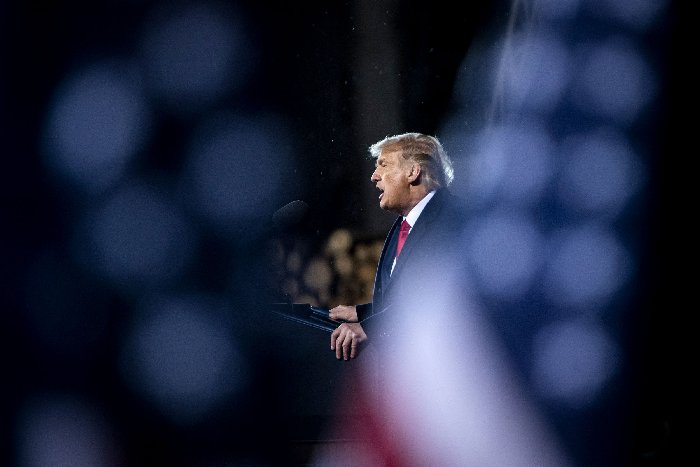 I have discovered to my chagrin that some of former President Trump’s most vociferous critics were one-time supporters of his policies. These are the people who reject his signature achievement, Operation Warp Speed, producing anti-China virus vaccines in record time. It’s the one achievement that China Joe Biden won’t dismantle and in fact, wants to exploit for his own political benefit.

By contrast to the informed consent form for the vaccines, I didn’t have to sign anything from China before the communists unleashed their virus on the world. They didn’t ask for my permission. They were experimenting, in my view, with viruses in a lab under military control. When it got out, deliberately or accidentally, they blamed the United States as part of a communist disinformation campaign.

I hate the Chinese communist regime and what it represents. What they did to our people was an act of war. I thank President Trump for confronting the Chinese regime and launching Operation Warp Speed to counter the effects of the virus. He should still be in office.

Whatever you decide, remember that it’s not just your life that’s at stake. Family and friends could get the disease from you.

Since I came out in favor of taking the vaccines, many former Trump supporters have attacked me. I depended on what Trump experienced and has said. But I also analyzed the arguments for and against the vaccines. I interviewed on America’s Survival TV several critics. I made my decision after reading the material that was provided to me in advance and which I had to sign. I fear the virus more than the vaccine.

What the critics of Trump don’t focus on is the nature of the virus, except to say they doubt this or that. Some claim the China virus is a total hoax or fraud. Some think it’s like the common cold or flu. I suspect they don’t know people who have gotten the disease, one of whom is Trump. One person I know who got it was in the hospital for months. He barely survived. His doctors said the virus is unique, unlike anything previously known because it attacks vulnerable parts of the body. It attacks the body at the body’s weakest link. It looks like the flu in some respects but is much more insidious.

These former Trump supporters reject his experience, in coming down with the disease, and his declaration that the vaccine is safe and effective. He was exposed to many of America’s top doctors at Walter Reed National Military Medical Center. But that doesn’t matter to them.

Some current and former Trump supporters don’t like Fauci and have other “experts.” That’s their right to seek opinions elsewhere. I have done so as well. I don’t trust Fauci. Neither does Senator Rand Paul, a medical doctor. He rejects Fauci’s advice on masks but accepts the need for the vaccines.

If people don’t accept the vaccines, it means they are also dismissive of Florida Governor Ron DeSantis and his efforts to control the disease by getting the population quickly vaccinated. This is the governor said to be “Trump’s heir” to the White House. And he is completely on board with “Operation Warp Speed” and has accelerated his plan for getting Florida residents vaccinated.

The GOP Doctors Caucus in the U.S. House of Representatives is vigorously promoting the vaccines. They also note, “Despite calls for national unity and bipartisanship, President Joe Biden and his top aides have declined to give the Trump administration credit on the nation’s COVID-19 vaccine rollout while relying heavily on a system established by their predecessors.”

Operation Warp Speed was a great success, one that will cement Trump’s importance and significance in American history. Yet, some of his former supporters don’t want to take the vaccine, despite his assurances of safety and effectiveness. I’ve heard from some of them. On the issue of vaccines, in contrast to what Trump did for the country in many other areas, they are suddenly anti-Trumpers. What a shame.

What I have experienced, in terms of taking a stand for the vaccine, reveals a group of people who think they know far more than Trump or anybody else who has gotten the disease. They think they are doing good by distributing information from dubious sources, This is a sad tendency that exists today because of so many different sources of information on the Internet (despite Big Tech’s arbitrary and stupid censorship efforts). People find some person saying something controversial and get scared, coming to the conclusion that the vaccine is too risky and more dangerous than getting sick from the virus. They rely on others with questionable credentials. Some are selling “natural” cures or supplements.

Decades earlier, some so-called medical experts were claiming that HIV/AIDS was fiction and that, in case it was real, it was manufactured in a U.S. military lab. That was pure communist disinformation picked up by people like Dan Rather and Barack Hussein Obama’s pastor Jeremiah Wright. Then, the Soviets were spreading the disinformation to take our attention away from communist biological experiments.

It doesn’t help that our intelligence agencies have been consistently duped by our enemies. The FBI falsely blamed a series of American scientists for the post-9/11 anthrax attacks. The anthrax was made in a lab but it was stolen by al Qaeda operatives with connections to those labs. Our FBI, at this late date, has still not gotten to the bottom of that scandal.

In regard to the China virus, some people focus on the fine print of possible side effects from the vaccine. They emphasize its experimental nature. All of that is true.

I’m scared, too, except that I fear the virus more than the vaccine. I have talked to victims of the disease and will not take a chance of avoiding it through the use of alternative treatments or vitamins. But you are welcome to take your chances. You have a right to consider Fauci a bigger enemy than the Chinese regime.

In fact, we know a lot about the vaccine but little about the virus. And that’s by design by China. The communists have covered up this disaster for the world from the beginning. As Trump quickly realized, the way out of this mess was a vaccine. He had no other choice. He had to act, and he did.

There are possible risks but as we saw on Tuesday when problems with the trials involving the AstraZeneca vaccine were detected, it appears there is a series of checks and balances in place.

When you examine the Trump Administration’s list of accomplishments, you find many in domestic and foreign affairs being undone by Biden/Harris.

But one achievement stands out: “Brought the full power of American medicine and government to produce a safe and effective vaccine in record time.” Millions of doses were quickly made available. Biden won’t unravel this achievement because he is trying to take advantage of it and take credit for it.

It’s a sad commentary that Trump’s greatest achievement is now being doubted or dismissed by people who once claimed to be his biggest supporters. They are playing into the hands of Trump’s mortal enemy – Communist China. They could lose their lives because of misguided opposition to life-saving vaccines.