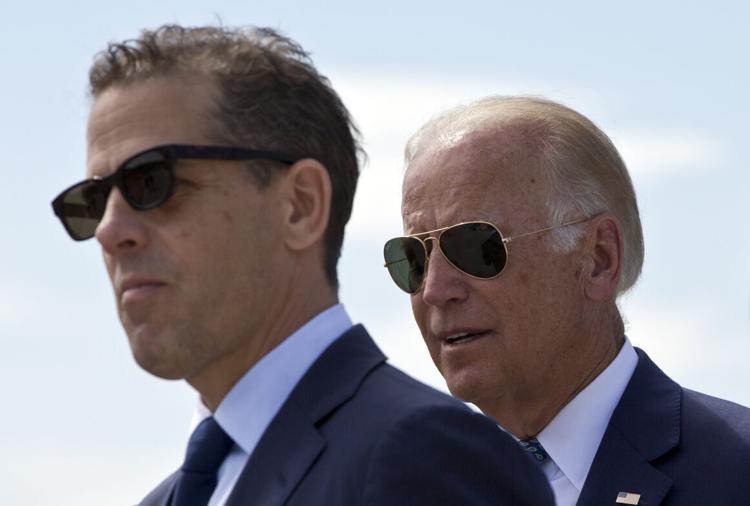 Joe Biden is a liar and a hypocrite. His attempted executive order end-run around the Second Amendment contains nothing that would have prevented recent mass shootings and certainly wouldn’t make people in cities like Chicago safer on any given weekend. For example, restricting people from making guns at home from kits and regulating gun parts accomplishes nothing – no one is being killed with homemade “ghost-guns” Gang-bangers and drug dealers fighting for turf do not spend their time making guns from kits. C’mon, man, get real.

He lies about the lack of background checks at gun shows allowing undesirables to buy any kind of firearm that they want  Name one mass shooting with a firearm purchased at a gun show. And ever notice that no one ever gets shot at a gun show?

A Joe Biden unconstrained by facts or reality nonetheless wants to make background checks more universal than they already are. I have an idea for Joe Biden – how about making the background checks we already have work and how about criminally prosecuting those who violate our gun laws and recklessly threaten public safety starting with Joe’s son Hunter Biden? Those moves would be a powerful antidote and deterrent to gun crimes.

Background checks only work if the databases are diligently populated and maintained. Take the church shooting in Sutherland, Texas which killed 26 people. The shooter, Devin Kelley, should have been flagged in the database for prior infractions but was not. As Fox News reported:

Kelley – who killed 26 people when he opened fire at a church in Sutherland Springs on Sunday – had a domestic violence conviction the Holloman Air Force Base’s OSI unit failed to enter into an FBI database used to conduct background checks on gun buyers, officials revealed Monday.

One wonders how many gun crimes might be stopped by simply hiring a few more clerical workers to follow the requirements of existing law and make the existing system work. And the irony here is that Kelley was stopped from continuing his murder spree by a private citizen who grabbed his AR-15 and helped chase him down.

Stephen Willeford certainly could remind the self-righteous Biden that guns in general and the AR-15 in particular, which has been misrepresented by gun control zealots as an “assault rifle,” can be used by good guys to save lives as well as by bad guys to take them.  He is the hero of Sutherland Springs, Texas, who, hearing the sound of gunfire at a nearby church, grabbed the AR-15 he had taught others to use as an NRA instructor and chased down the mass murderer who had shot up the First Baptist Church before he could continue his murder spree elsewhere:

The hero who last November stopped the gunman behind the deadly Texas church massacre said using an AR-15 enabled him to end the bloodshed.  In an emotional interview with CRTV’s “Louder With Crowder” on Monday, Stephen Willeford described the gunfight and dramatic car chase that ensued to stop the shooter from slaughtering additional churchgoers. The former National Rifle Association instructor was home Sunday morning when his daughter told Willeford she had heard gunshots from the nearby Baptist church, prompting him to get his AR-15 rifle from his safe and load a magazine.  He ran to the church and confronted the alleged shooter, Devin Patrick Kelley, who fired shots at Willeford.  While taking cover behind a pickup truck, Willeford fired several shots at the gunman, who sped away in his car. Willeford ran to a truck stopped at a stop sign and asked the driver to help him to stop Kelley, who had a history of domestic violence and had been kicked out of the military.  The two men pursued the gunman, whom [sic] officials say wore tactical gear and a bullet-proof vest, down a nearby highway until the vehicle eventually careened off the side of the road.  When police arrived, Kelley was found dead on the scene with a self-inflicted gunshot wound to the head as well as two other gunshot wounds – one on his leg and one on his torso.  Officials believe the gunman took his own life.”If I had run out of the house with a pistol and faced a bulletproof vest and kevlar and helmets, it might have been futile,” Willeford said.  “I ran out with an AR-15 and that’s what he was shooting the place up with.” 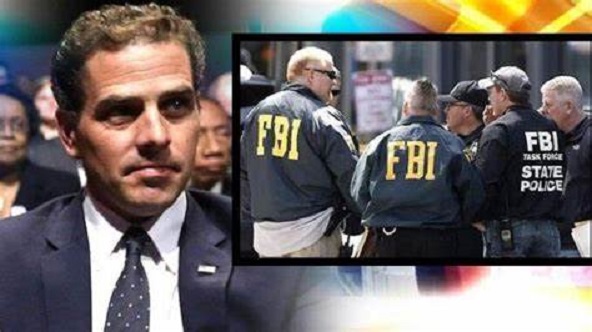 Willeford is just one of the “bitter clingers” in Texas and elsewhere who shoot back, saving, not endangering lives, by being the good guys with guns stopping the bad guys with guns. Assault is a behavior,  not a weapon, and stopping a bad guy with a gun is not assault.

Joe Biden wants to keep guns out of the hands of the Stephen Willeford’s of the world, guys who prove that the only way to stop a bad guy with a gun is a good guy with a gun. If Joe Biden had his way, Willeford wouldn’t have stopped Devin Kelley who, like Hunter Biden, got kicked out of the military yet was able to buy a gun. That is the problem that needs to be fixed, Joe Biden, enforcing existing reporting laws and punishing those who lie on their federal applications to hide the reasons they should be disqualified, like Hunter Biden. As Andrew McCarthy writes in the New York Post:

“Lie and try.” That’s what the feds call cases in which people who are disqualified from owning guns under federal law try to get a gun by concealing the disqualification. It is maddening but true that many of these people are not charged….

The purpose of the law is to prevent lethal weapons from falling into the hands of people who are unstable or dangerous. Thus, some of the disqualifications deal with criminal and similarly suspect behavior, such as prior convictions and dishonorable discharge from the armed forces, while others deal with conditions of instability and mental disturbance, such as narcotics abuse and mental-disability adjudications.

And notice what happened in Hunter’s case. He did not reveal his history of drug abuse, he got the gun, and he handled it negligently, to the point, according to reports, that his then-girlfriend found it in a car and carelessly sought to dispose of it in the trash bin of a local store — obviously because she was concerned about the dangerous potential of his having it. 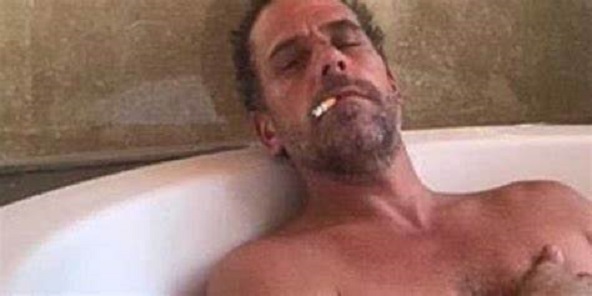 This is the guy who smoked parmesan cheese he crawled on his carpet to find. Hunter Biden was kicked out of the military due to a drug problem and lied on his federal application to het a gun. He did not buy that gun at a gun show, He did not assemble it from a kit. Yet his careless handling of it could have resulted in another tragedy had the gun, disposed of not far from a school, been found by a child or a criminal.

Why hasn’t Joe Biden said that Hunter Biden should never have been allowed to buy a gun and that he should be criminally prosecuted for lying on his federal application? This is the class act who had an affair with his dead brother’s widow, an affair blessed by father Joe who said he was glad they had “found each other.” And the question is not only whether that was Hunter’s laptop but whether the shocking pictures and videos of Hunter are him. Yet for some reason, he never gets asked. As The Federalist reports:

Hunter Biden was the subject of a strange missing firearm case in 2018 after Hallie Biden, the wife of his late brother and subsequently Hunter’s girlfriend, tossed it into a trash can behind a grocery store near a high school, according to a strange new report from Politico. It appears Hunter, the son of President Joe Biden, might have lied on the federal forms he filled out to purchase the gun a few months prior, forms The Federalist has now obtained.

Hunter answered “no” to a question on the Firearms Transaction Record asking whether he was an “unlawful user of, or addicted to, marijuana or any depressant, stimulant, narcotic drug, or any other controlled substance.”…

The now-president’s scandal-ridden son was in numerous drug and alcohol rehab programs, including in 2003, 2010, and 2014, soon after being discharged from the military for using cocaine. According to the New Yorker, he also went on a cocaine binge in 2016. His infamous laptop he dropped off for repairs in 2019, a story which tech giants and the media aggressively tried to cover up during the run-up to the 2020 presidential election, included graphic photos and video of Hunter allegedly smoking crack cocaine while engaged in a sex act.

It’s unclear whether Hunter was using drugs around the time of his firearm purchase or what timeframe the question “are you a user of” illicit substances implies. Hunter was, however, suspected of smoking crack cocaine in a Washington, D.C., strip club in late 2018. He purchased the firearm the same year on Oct. 12. 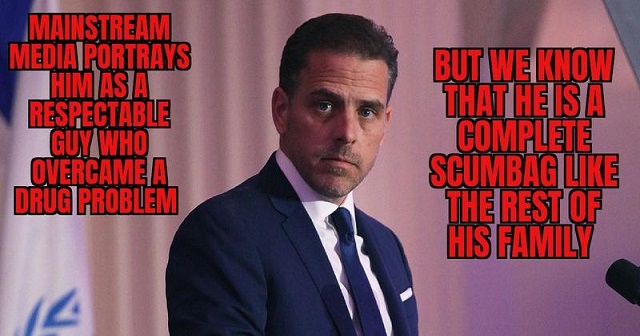 According to Politico’s reporting, Hunter Biden lied on his ATF Form 4473, the firearm transaction record and background check form, on October 12, 2018, when he swore under penalty of a $250k fine and 10 years imprisonment that he was not a drug user. Then, only 11 days later, Hunter’s then-girlfriend (the widow of his not-long-deceased brother, but not the mother of the child he sired with a stripper while he was living with his brother’s widow), Hallie, “disposed” of the handgun in a trash can outside of a grocery store.