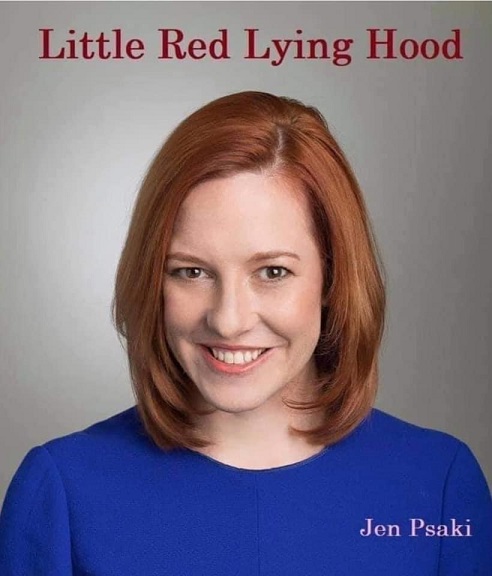 Fascism has arrived in America, that insidious and pernicious combination of privately-owned companies operating in conjunction with and at the direction of a government that has no interest in free elections, only in the means of expanding its power over every aspect of our daily lives, while making these companies rich as they help enslave us to the Deep State.

Jen Psaki, who lied for Hillary Clinton as State Department spokesperson and now lies for the cognitively disabled Joe Biden as White House  Press Secretary, has, in a series of pronouncements, admitted the lie that tech tyrants like Facebook, Google, and Twitter are private companies that can do what they want, protected from liability lawsuits by Section 230, confessing that they are state actors directed by the Biden administration to suppress free expression and any opinion deemed hurtful to Team Biden to influence, manipulate, and steal elections. That might as well be agencies in Biden’s cabinet, judging from their submission to the administration’s will on the control and suppression of information necessary for voters to make informed decisions in a functioning democracy. As Fox News reported:

On Thursday, Psaki was asked a question regarding the Biden administration’s request for tech companies to be more “aggressive” when policing what they referred to as “misinformation.” Psaki revealed that the White House is “in regular touch with social media platforms” to handle it.

“We are in regular touch with the social media platforms and those engagements typically happen through members of our senior staff and also members of our COVID-19 team — given, as Dr. Murthy conveyed, this is a big issue, of misinformation, specifically on the pandemic,” Psaki explained.

While referencing the team’s actions, Psaki also revealed that they are “flagging” posts on Facebook as part of their efforts.

“Within the Surgeon General’s Office, we’re flagging posts for Facebook that spread disinformation,” Psaki said. “We’re working with doctors and medical professionals to connect medical experts with people, who are popular with their audiences with accurate information and boost trusted content. So, we’re helping get trusted content out there. We also created the COVID Community Corps to get factual information into the hands of local messengers.”

Psaki’s comments were met with fierce pushback online with some calling the actions as infringing on the First Amendment.

“Psaki says the White House has been flagging ‘problematic posts’ on Facebook they believe are misinformation about Wuhan coronavirus. Reminder: Fauci worked with Facebook to ban the lab leak theory, which is factual, for more than a year,” Fox News contributor Katie Pavlich tweeted.

Remember when we were harangued that Trump was a dictator intimidating the press?  Imagine if you will a government that through HR 1 and SR 1 has nationalized elections with baked-in cheating through ballot harvesting, no voter ID, and no absentee ballot security and has also sanitized news and opinion on social and legacy media for its own benefit, controlling what you can read, what you can say, even who you can talk to. This is a dictatorship.

END_OF_DOCUMENT_TOKEN_TO_BE_REPLACED

Exactly how much is the United States going to tolerate?

Not only is the United States and the Western world concerned about the constant military threat of China in the South China Sea but the cyberwar continues.

Just read through this Department of Justice report for context –>

A federal grand jury in San Diego, California, returned an indictment in May charging four nationals and residents of the People’s Republic of China with a campaign to hack into the computer systems of dozens of victim companies, universities and government entities in the United States and abroad between 2011 and 2018. The indictment, which was unsealed on Friday, alleges that much of the conspiracy’s theft was focused on information that was of significant economic benefit to China’s companies and commercial sectors, including information that would allow the circumvention of lengthy and resource-intensive research and development processes. The defendants and their Hainan State Security Department (HSSD) conspirators sought to obfuscate the Chinese government’s role in such theft by establishing a front company, Hainan Xiandun Technology Development Co., Ltd. (海南仙盾) (Hainan Xiandun), since disbanded, to operate out of Haikou, Hainan Province.

The two-count indictment alleges that Ding Xiaoyang (丁晓阳), Cheng Qingmin (程庆民) and Zhu Yunmin (朱允敏), were HSSD officers responsible for coordinating, facilitating and managing computer hackers and linguists at Hainan Xiandun and other MSS front companies to conduct hacking for the benefit of China and its state-owned and sponsored instrumentalities. The indictment alleges that Wu Shurong (吴淑荣) was a computer hacker who, as part of his job duties at Hainan Xiandun, created malware, hacked into computer systems operated by foreign governments, companies, and universities, and supervised other Hainan Xiandun hackers.