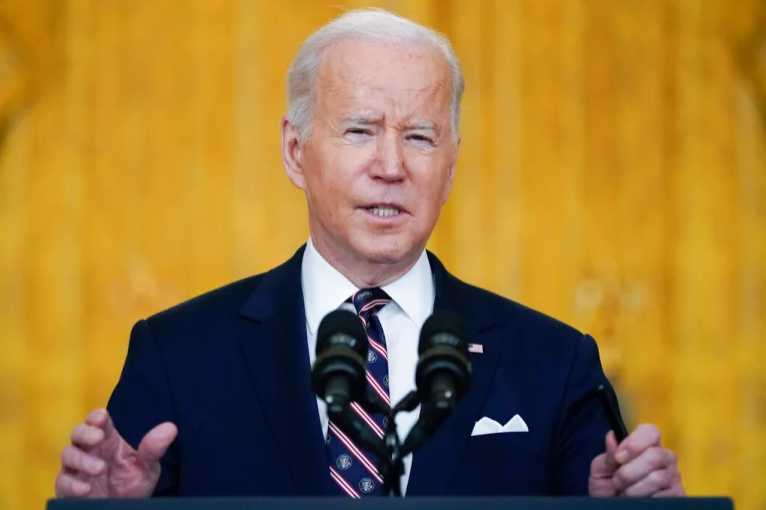 Without any objection to how the war is being conducted on the American side, General Mark Milley has said it will last “at least years for sure.” That’s because Biden doesn’t want Ukraine to win. Milley and his comrades are content to keep the war going, costing thousands of lives, as long as they don’t provoke Vladimir Putin.

Putin seems to have a mysterious hold over members of the Biden Administration.

Almost every day we see another story about political figures, Democrats and Republicans, wondering why the Biden Administration is so timid when it comes to providing weapons to Ukraine to win the war against Russia.

The typical term is “slow-walking” weapons to Ukraine.

Putting it another way, there is some substance to the claim by Marxist scholar Noam Chomsky that current U.S. policy is to “fight to the last Ukrainian” while “offering no way to save Ukraine from further tragedy.”

However, saving Ukraine — and the world — from further tragedy is not to give in to Russia but rather to develop a strategy of victory over communism.

Recognizing the no-win nature of the war, when it comes to the United Nations, Ukraine President Zelensky said the world body wasn’t doing anything to support Ukraine because Russia is a permanent member and has veto power. He noted, correctly, “We are dealing with a state that turns the right of veto in the UN Security Council into a right to kill.”

Biden, a great backer of the U.N. who once wrote about his love for a New World Order, understands what Russia is doing and either doesn’t care or has another agenda, set in motion by his handlers, that will be implemented at the same time.

I think we can figure this one out.

His other points were:

Zelensky’s conclusion was that “we must do everything in our power to pass on to the next generations an effective UN with the ability to respond preventively to security challenges and thus guarantee peace.”

Needless to say, that won’t do anything to stop Russia or save Ukraine. And it seems practically impossible since Russia and China have permanent seats on the Security Council.

However, this presents an opportunity for various U.N. “reformers” on the left side of the political spectrum who want the U.N. to be a world government. Some of these proposals could be pursued depending on what happens in Ukraine and the Middle East.

For example, the Institute for Public Accuracy,  a pro-U.N. group, just happened to send out a release on “Ukraine and International Law,” arguing that Ukraine must accept Russia’s terms for “peace,” to go along with certain reforms of the United Nations, to make the world body more “effective.”

Regarding the latter, we are informed in another press release that the UN Human Rights Council, which included Russia, created the mandate of the Independent Expert on the Promotion of a Democratic and Equitable International Order.   The first mandate-holder, Dr. Alfred de Zayas, has written, Building a Just World Order, proposing “disarmament for development.”

We know what all of this means. In the Middle East, this will be a deal for a “nuclear-free zone” in the Middle East that will put United Nations pressure on Israel to abandon its nuclear deterrent.

In Europe, the problem with this approach is that the 1994 Budapest Memorandum, signed by the Russian government, was supposed to guarantee Ukraine’s territorial integrity, in exchange for giving its Soviet nuclear weapons back to Moscow. Russia violated the agreement in a blatant fashion when it invaded Ukraine in 2014.

Hence, any new “peace treaty” will have to put trust into a regime in Russia that has already violated its commitments. But since Biden is trusting Russia as a player in negotiations for a new Iran nuclear agreement, the odds are likely that Biden will trust Russia again on Ukraine. That means agreeing to “peace” in Ukraine on Russian terms, perhaps enforced through the presence of U.N. “peacekeepers.”

This could be one of the building blocks of Biden’s New World Order, one of his long-time goals. The reputation of the U.N. will be enhanced and the Russian regime will be welcomed back into the family of nations, perhaps with Putin officially stepping down from power after his victory over Ukraine.

The bottom line: Biden can’t afford to have Ukraine win the war. It’s not part of the game plan. He intends to get Russian approval for the Iran deal and wants Ukraine to make a deal with Russia as well.

Of course, another explanation for this turn of events could be old-fashioned financial corruption, as former President Trump notes evidence that the Moscow mayor’s wife gave US$3.5 million to Hunter Biden in a bid to curry favor with his father, the former vice president and now president.

“That’s a lot of money,” Trump said on the Real America’s Voice “Just the News” show. “She gave him US $3.5 million so now I would think Putin would know the answer to that. I think he should release it.”

“I think we should know that answer,” he added.

It turns out that, in the end, Biden may be officially unmasked as the real Russian agent. But we don’t need to wait for a trial of Hunter Biden to get that answer.