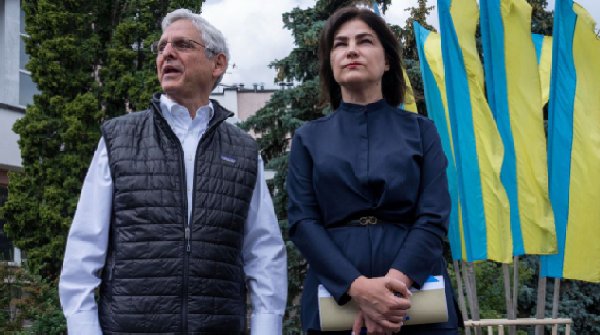 Umm…Interesting timing… understand the size and bona fides of this envoy and why would Attorney General Merrick Garland himself need to go to Ukraine? I submit it is due in part to the Biden Crime family and that laptop… could it be that something is about break or is there some evidence that requires sequestering?

But you decide and read on…

“There is no hiding place for war criminals. The U.S. Justice Department will pursue every avenue of accountability for those who commit war crimes and other atrocities in Ukraine.”

In a meeting with Ukrainian Prosecutor General Iryna Venediktova, Attorney General Merrick B. Garland commended the efforts of the Ukrainian people to defend democracy and uphold the rule of law, and announced additional U.S. actions to help Ukraine identify, apprehend, and prosecute those individuals involved in war crimes and other atrocities in Ukraine.

“The United States stands in solidarity with the people of Ukraine in the face of Russia’s continued aggression and assault on Ukraine’s sovereignty and territorial integrity,” said Attorney General Garland. “America – and the world – has seen the many horrific images and read the heart-wrenching accounts of brutality and death that have resulted from Russia’s unjust invasion of Ukraine.”

Specifically, Attorney General Garland announced the launch of a War Crimes Accountability Team to centralize and strengthen the Justice Department’s ongoing work to hold accountable those who have committed war crimes and other atrocities in Ukraine. This initiative will bring together the Department’s leading experts in investigations involving human rights abuses and war crimes and other atrocities; and provide wide-ranging technical assistance, including operational assistance and advice regarding criminal prosecutions, evidence collection, forensics, and relevant legal analysis. The team will also play an integral role in the Department’s ongoing investigation of potential war crimes over which the U.S. possesses jurisdiction, such as the killing and wounding of U.S. journalists covering the unprovoked Russian aggression in Ukraine.