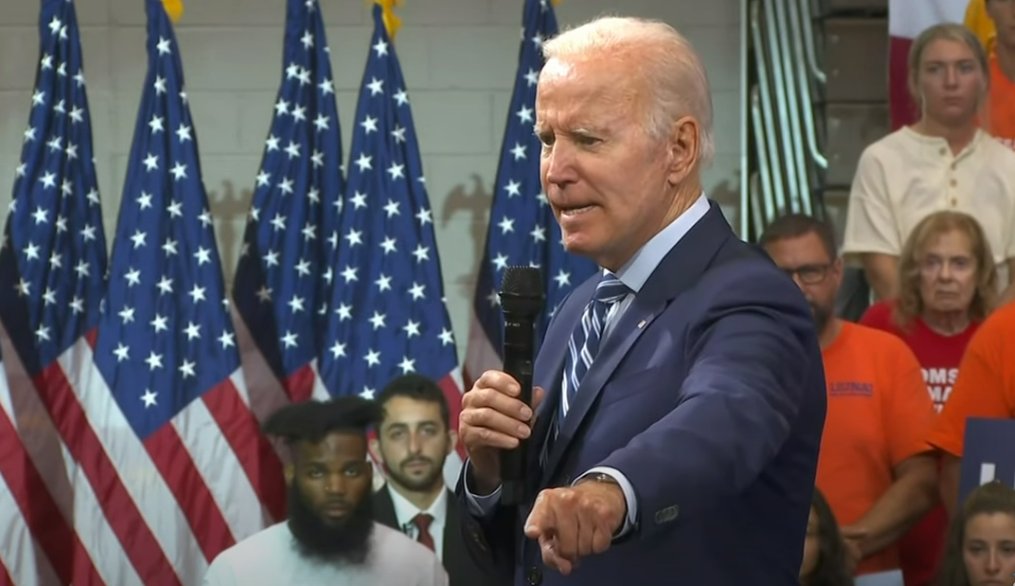 Calling his opponents fascists, Joe Biden is sounding like former Soviet KGB Colonel Vladimir Putin offering a justification for war against Ukraine. In typical communist fashion, Putin had said Ukraine was full of fascists. Biden’s recent “anti-fascist” rhetoric against Republicans makes him sound like the Russian he supposedly wants to defeat in Ukraine. Perhaps Biden and Putin are on the same side after all.

As difficult as it may be to believe or accept, the elderly and frequently incoherent U.S. president has become the face of communism in America today. From the no-win war in Ukraine to the “Inflation Reduction Act” in America, Biden is pursuing policies that weaken the Free World and appear designed to reduce America to the status of a bankrupt Third World nation.

If you have any doubts, consider that the old Moscow-funded Communist Party USA, which endorsed Obama for president in 2008 and 2012, has entertained its readers with such headlines echoing the Democratic Party agenda as:

Meanwhile, the CPUSA is ecstatic over the U.S. Postal Service releasing a new Pete Seeger “forever” stamp, honoring the self-proclaimed communist, with an official USPS stamp ceremony hosted by the Newport Folk Festival at the Jane Pickens Film and Event Center in Newport, Rhode Island. Seeger’s FBI file confirms his service to the communist cause.

Upon his passing, President Barack Hussein Obama issued a statement that declared, “Over the years, Pete used his voice — and his hammer — to strike blows for workers’ rights and civil rights; world peace and environmental conservation.” In fact, as the record shows, he was an apologist for murderous tyrannies, and Obama knew it.

Seeger performed on the steps of the Lincoln Memorial during an inaugural concert for Obama.

Before Obama honored him, Democratic President Bill Clinton in 1994 gave Seeger the National Medal of Arts.

When American presidents and even postage stamps honor communists, you know America is in trouble.

The release of the Pete Seeger stamp is the latest evidence that America is saddled with a regime in Washington, D.C. that wants the public to honor communists like Seeger rather than America’s founding fathers.

Interestingly, one scholar noted that Pete Seeger was famously known to perform with a guitar that had “this machine kills fascists” written on it. That was the communist line, then and now, as reflected in Joe Biden’s new Marxist rhetoric, echoing talking points undoubtedly provided by Obama and/or his Marxist associates.

People are waking up to the rhetoric and the policies but it may be too late.

In the face of this challenge, Republican Senate “Leader” Mitch McConnell, in his typical uninspiring fashion, suggests the GOP may not capture the Senate. Meanwhile, the media’s favorite RINO, Larry Hogan of Maryland, is badmouthing the Trump-backed candidates in various races across the country, giving aid and comfort to Wes Moore, the Democratic candidate for Maryland governor who is a former marijuana business executive backed by Oprah.

Moore may be the next Obama if Michelle doesn’t run in 2024.

Senator Ted Cruz has hit the target, noting that the recent White House push for more turnout among Democrats by forgiving some student loans is designed to benefit the “slacker baristas” if they can “get off the bong” long enough to vote.

To eliminate any doubt, the Democrats are pushing the legalization of marijuana on the federal level, creating more zombies from Marxist Madrassas who can’t think for themselves but are willing to accept government money and get stoned.

Most importantly, however, in terms of consolidation of a communist regime in America, the Department of Justice, with jurisdiction over the FBI, has become a modern-day communist-style Ministry of Interior.

For all intents and purposes, the FBI is the new KGB.

More relevant than ever before, the 1961 House Committee on Un-American Activities analysis of the book How Parliament can Play a Revolutionary Part in Transition to Socialism, is a must-read.

This is a how-to-book on how a parliament or legislative body (such as the U.S. Congress) can be helpful in “transforming democratic nations” into communist countries. The author was Jan Kozak, historian of the Communist Party of Czechoslovakia.

This is what happened to South Africa, where a communist regime is running the country by attracting and exploiting the votes of the majority black population in “free elections.”

Closer to home, my group, America’s Survival, Inc., examined how the Obama regime played a major role in the “success” of Canada’s Liberal Party leader Prime Minister Justin Trudeau, who is corrupting Canada through drugs, sexual perversion, and a Muslim invasion. Trudeau, an admitted pothead, legalized marijuana nationwide on October 17, 2018, opening up Canada to drug cartels, and facilitated the transgender revolution in Canadian schools. He visits mosques, abandoned his Catholic faith on abortion and same-sex marriage, and has invited foreign Muslims from terror-supporting countries to come to Canada.

Biden, under the direction of Barack Hussein Obama, is following the same playbook.

Putting Hunter Biden in jail, a fantasy, will not resolve our predicament, which is much bigger than one former drug addict who made millions using his father’s influence. The issue is the influence of the Intelligence Community over the media, as confirmed by Mark Zuckerberg, and the fact that former and current intelligence officials, especially from the CIA, tried to suppress the story of Biden’s corruption through an open letter before the 2020 election.

One hope is the workers, supposedly the source of the communist revolution, who gravitated toward Trump in 2016 and are more firmly on his side in 2022, as they witness America’s slide into totalitarianism. They may not be experts on communist strategy and tactics but they are the ordinary Americans who work hard for a living and fly their American flags on a daily basis. I ran into one at the local gas station, where he filled up his truck with gas costing more than $100.00, and he jokingly yelled out to me, “Thank you, Joe Biden.”

Biden reminds people of the old saying, “He’ll do everything for the workers except become one.”

As strange as it may sound, America needs a real workers’ revolution. They have nothing to lose but their chains.