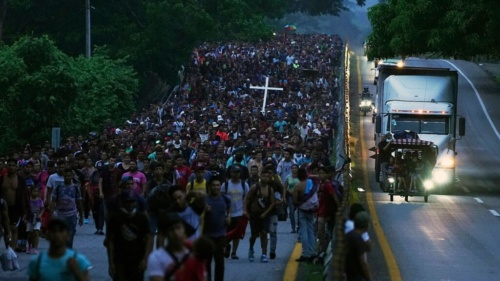 New reporting about those Venezuelan ex-convicts being released by the Nicolas Maduro regime indicates that the situation may be even worse than initially thought.

After leading open opposition to then-Venezuelan dictator Hugo Chavez in 2002, former Venezuelan lieutenant in the National Guard Jose Antonio Colina Pulido fled to the U.S. in 2003 to seek political asylum. He has been living in exile in the U.S. ever since. He has provided information to a number of U.S. agencies, including the Drug Enforcement Agency (DEA).

According to Colina, current Venezuelan ruler Nicolas Maduro not only has been releasing convicted criminals from his prisons who’ve joined migrant caravans north to the U.S. but doing so specifically on the condition that they migrate north to cross into the U.S. Colina, who’s been posting on social media and in online videos, says that among this flow out of Venezuela are Venezuelan paramilitary groups who are not only penetrating the southwest U.S. border but coming in organized units, led by a unit commander.

Colina continues to obtain information from Venezuelan exiles, some among the migrant flows and some already in the U.S.  According to their information, once in the U.S., some of these Venezuelan paramilitary groups have been organizing into cell structures. Colina fears that Maduro may intend to sow chaos and conflict among the Venezuelan exile communities in the U.S. as well as destabilize the U.S. itself, as long as the southern border remains open.

When we combine this new information with the understanding that since at least 2005 when Mahmoud Ahmadinejad was President of Iran and Hugo Chavez was President of Venezuela, the Islamic Republic of Iran and its Lebanese Shi’ite terror proxy Hizballah have established extensive networks in Venezuela, the possible implications of this new reporting become very troubling. Iran has established a foothold across Venezuela, as well as elsewhere in Latin America, using its presence within business and financial institutions, diplomatic outposts, mosques, and Islamic Centers, strategic infrastructure projects including mines, ports, and weapons production companies, as well as throughout the Venezuelan government to project influence and power into the heart of the Western Hemisphere.

Not only Iran and Hizballah but allies from among the Cuban intelligence and security services, are deeply embedded in the Venezuelan regime. The movement of Venezuelan illegal migrants across the open, unprotected U.S. southern border and on up into communities all over the country, perhaps directed and organized by these malign actors, should be a wakeup call to the Biden administration, but especially the Department of Homeland Security and Customs and Border Protection.

Rumors are circulating among Venezuelans in exile who are concerned about the arrival of Venezuelan paramilitary groups to the U.S.For the past four weeks, retired Venezuelan lieutenant and political exile José Antonio Colina Pulido says he has been alerting U.S. authorities through his online show and social media accounts that he has been receiving information Nicolás Maduro is releasing convicted criminals on the condition that they would emigrate from the country to the United States.

According to CBP, between October 2021 and July 2022 more than 130,000 Venezuelan migrants have had encounters at the border with immigration agents after illegally crossing into the United States.