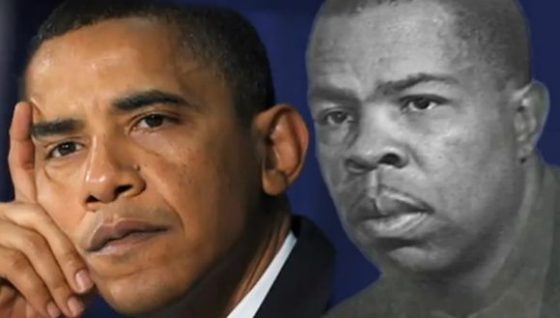 The Washington Post is not sloppy; it is dishonest. Forget Kenya or Hawaii as Barack Obama’s birthplace. The issue is that he was mentored by a communist named Frank Marshall Davis, who taught him that blacks had a “reason to hate” and that Christianity was the white man’s religion. Davis essentially raised Obama in Hawaii for seven years of his young life, when he was smoking dope in the “Choom Gang” and learning how to be a revolutionary. That’s why Obama left Hawaii to admittedly hang out with “Marxist professors.” Davis had taught him well.

The rest is history, except that the Post and other liberal media have sanitized history in order to conceal the Marxist nature of Obama’s proposed “fundamental transformation” of America.

In Obama’s book, Dreams from My Father, Davis was “Frank,” a mysterious figure with only a first name who had served as his mentor. Later, the identity of “Frank” was shown to be Davis by Trevor Loudon and Accuracy in Media. Davis had a 600-page FBI file and had been on the FBI’s Security Index for 19 years. That was the smoking gun in Obama’s life story, not the place where he was born. His birthplace was always a secondary issue.

The “birther” issue is now being used by Hillary Clinton, Michelle Obama and their media allies to get black people riled up. It’s part of their get-out-the-vote drive. Not surprisingly, the Post and other media play right along with it. They realize Obama has done little for black people. So they have to demonize Trump.

The Post’s Jenna Johnson reported on Friday afternoon that Hillary Clinton “said Trump owes Obama an apology for promoting a false theory about his birthplace. She did not directly address the Trump assertion that her own 2008 campaign promoted the same theory, but her current campaign flatly rejected that claim.”

This appeared under the headline, “Trump admits Obama was born in U.S., but falsely blames Clinton for starting rumors.”

Do you remember Johnson? She was the co-author of a Post story asserting that Trump was sexist for talking about whether Hillary was physically fit to be president. That story appeared one day before Hillary collapsed while leaving the 9/11 memorial in New York City.

Actually, Hillary Clinton’s 2008 campaign manager Patti Solis Doyle did admit that a Clinton staffer had spread the claim that Obama was born outside of the United States. Hillary did not personally apologize to Barack Obama for that. Yet now the cry is for Trump, who questioned the place of his birth, to personally apologize to Obama.

All of this is just racial politics. Hillary knows that most blacks are not as enthusiastic about her as they were for Obama. So she has to get them up in arms. On cue, the Congressional Black Caucus has called on Trump, not Hillary, to apologize. The group’s political action committee has already endorsed Hillary for president.

Obama should apologize to the American people for failing to tell us the truth, and nothing but the truth, about Frank Marshall Davis. First, he covered up the identity of “Frank.” Then, when the truth came out, his campaign said Davis was just a civil rights activist.

The Post still won’t tell the truth about the Obama-Davis relationship, eight years after we disclosed it, because the reporter they assigned to do the job was himself a red-diaper baby who had personal and family reasons to conceal the truth.

After Patti Solis Doyle admitted that a Clinton staffer had spread the claim that Obama was born outside of the United States, James Asher, the former McClatchy Washington Bureau Chief, claimed that Clinton aide and ally Sidney Blumenthal had told him about it. He said Blumenthal raised the issue with him “face to face.”

This is very significant. Blumenthal had also raised the Frank Marshall Davis issue during the 2008 campaign. That was never retracted because it was true. The media ignored it for that very reason. They didn’t want to sink Obama’s campaign for the presidency. They still don’t want to bring it up.

The “birther” issue is getting more traction, even though it’s mostly beside the point, because Hillary thinks she can exploit it politically.

Hillary ignores “Frank” now, for obvious reasons, because she needs Obama’s help with the blacks to get elected in November. Blumenthal has to know how damaging the “Frank” connection is to Obama because he cited our work on the subject in 2008. Today, however, Hillary Clinton needs Obama. So Davis is a non-issue.

Coming to her aid is Michelle Obama, saying, “There were those who questioned and continue to question for the past eight years, up through this very day, whether my husband was even born in this country. Well, during his time in office, I think Barack has answered those questions with the example he set by going high when they go low.”

He hasn’t answered the questions about “Frank” because the press corps has never asked.

Tell us all about “Frank,” Mr. President. Tell us about the meaning of your poem to Davis titled, “Pop,” which included strange lines about stains and smells on shorts.

There are indeed very important questions remaining about “where” this president came from. The “where” is not the physical place, but the psychological and mental space in Barack Obama’s young mind that was once filled with communist notions by Frank Marshall Davis. Everything that he has done politically can be explained by the Davis influence.

Even Blumenthal knew there was a story there. It is the cover-up that changed the course of American history and put the United States on the course to becoming a socialist state.

Obama’s foundation advises us that he has changed America, but that the work is not yet done. “As President Obama has said, the change we seek will take longer than one presidency,” the foundation tells us.

You ain’t seen nothing yet! Frank Marshall Davis lives on through Barack Hussein Obama.