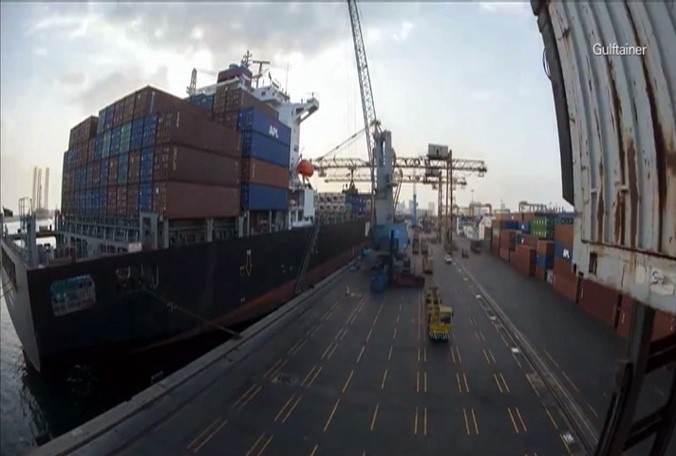 Gulftainer, a Middle East-based company, is opening its first American cargo terminal today at
Port Canaveral. The new terminal is expected to have a $630 million impact on the local economy.
(VIDEO STILL/Gulftainer)

Gulftainer Co. Ltd., an Emirati container terminal operator, opened its first US terminal today in Port Canaveral, Florida. A number of staunch conservatives showed up to protest the opening and with good cause.

The terminal, which has leased land at Port Canaveral for 35 years, marks the first significant containerized cargo operation there and has the potential to expand to other ports. With two gantry cranes and 20 acres of container storage space, Gulftainer estimates that terminal could handle up to 200,000 TEUs—or the equivalent of 200,000 20-foot-long shipping containers—each year.

Gulftainer hopes to capitalize on Central Florida’s growing role as a logistics hub, with inland warehouses, rail access to the Northeast and Midwest and land for infrastructure development. Periodically docked at Port Canaveral are nuclear assets for the US military and NATO, so this is also a national security issue. 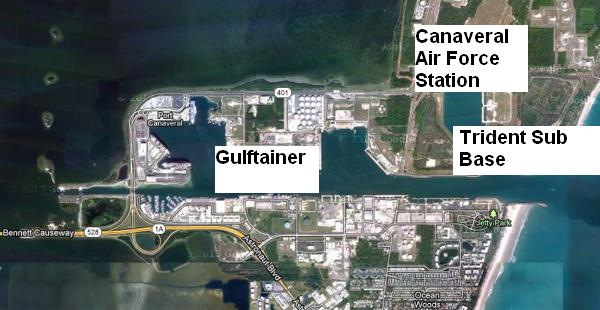 Peter Richards, Gulftainer’s managing director, said he has been trying to bring Gulftainer, which operates container terminals in Iraq, Saudi Arabia, Turkey, Russia, North Africa, Brazil and elsewhere, to the US for about two years. Founded in 1976, Gulftainer is a subsidiary of privately-held conglomerate, Crescent Enterprises, based in the United Arab Emirates. Notice that the countries where this company operates have terrorist ties and/or are hostile to the US. Since Dubai Ports World created a ruckus in 2005 when trying to take control of a number of US ports, Gulftainer has been hesitant to enter the market in the US. But with the Progressive/Marxist atmosphere of the Obama Administration and the blatant colluding with the Muslim Brotherhood here in our government, the time seemed just about right for allowing an Islamic entity to move in and control a major US port, I guess.

Gulftainer is a $100 million investment and simply put, should not be allowed. Since we are in military conflicts across the globe with radical Islamists and countries such as UAE and Qatar are known to have deep terrorist ties, this company should have been thoroughly vetted before allowing them in as an owner of a strategic port. Instead, few have looked into them and they are heralded as an outstanding company.

The promise of new jobs should not overshadow the fact that this company is a security risk. And with nuclear subs docking there, can we afford that kind of gamble? Port leaders expect the new business to create 2,000 jobs with an impact of more than $630 million on the local economy of Port Canaveral.

Perhaps we should listen to those there that are questioning the sanity of allowing a Middle Eastern company to control a port that is of huge significance to the US:

But some opponents, including a California congressman, have raised concerns that the company’s ties to [the] Middle East make it a bad choice to be located near the Kennedy Space Center, Cape Canaveral Air Force Station and other military installations.

“We’re not bad people as I try to emphasize,” said Peter Richards, Gulftainer’s managing director. “We’re good people here for the good of the community (and) the good of the port. And I think in the next six months, they’re going to see that. We’re going to actually generate Canaveral into a good logistics hub.”

Some bloggers have even claimed Gulftainer helped ship weapons to terrorist groups, but the company said that’s not true.

“The garbage that they put about us being linked to terrorist groups, where do they come off?” Richards said. “I don’t understand how anybody can do that. We’re trusted by 15 governments worldwide. We actually cooperate with your own military. We actually provide the logistics for the American forces in the Middle East.”

Port Canaveral leaders are coming to the defense of the company.

“We’ve selected them because they are good, quality people,” said John Walsh, CEO of Port Canaveral. “They are one of the best terminal operators in the world, and then to have members of our community say things that are inappropriate, racist and profiling. To me, that’s not OK.”

And exactly how do you know they are such ‘good’ people? And is it really racist to question the terrorist ties of a company moving into your community? Sounds like those so-called leaders are telling residents to just shut up and go away – that they should know their place and leave big business to the elites as it should be. I don’t think so. Must of been a lot of silver that crossed the palms of leaders and business icons there in Port Canaveral. They’ve been blinded by the shiny light of corruption.

Gulftainer is adjacent to a US Navy nuclear submarine base and NASA’s Kennedy Space Center. It has allegedly been shipping weapons through the Port of Umm Qasr to two Iranian-backed terrorist militia groups in Iraq, the Badr Brigades and Asaeib Ahl al-Haq (AAH), according to a leak from Iraq General Port Company officials in Basra to Iraqi media.

According to the 1776 Channel, who has done yeoman’s work on this subject, Port Canaveral is home to critical national security operations and infrastructure. A plethora of space and defense installations and programs, many of them highly classified, are situated either inside the port or within the immediate vicinity:

This deal has actually alarmed the military and is raising the eyebrows of a number of security experts. It was approved by Treasury Secretary Jacob ‘Jack’ Lew, a former senior adviser to President Clinton. Gulftainer’s exclusive arrangement with Port Canaveral was negotiated in secret under the code name ‘Project Pelican.’ Evidently, you have to sign the deal before you can know what is in it there in Port Canaveral. Sound familiar? And when all else fails, pull the race card to shut people up. 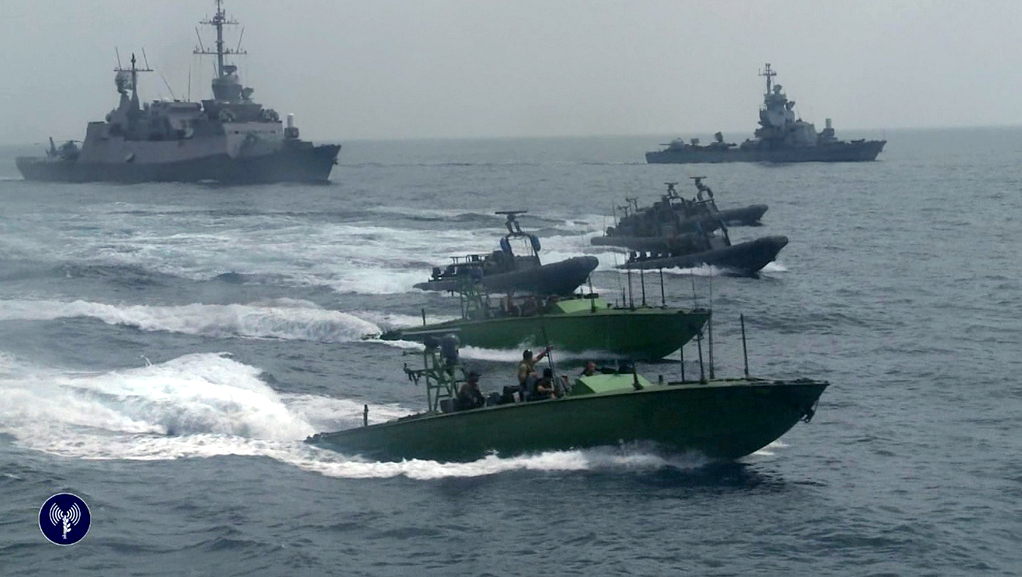 Gulftainer USA (GT USA) is a unit of UAE’s privately-held intermodal container terminal operator Gulftainer, which in turn is a unit of Crescent Enterprises, part of the Crescent Group conglomerate. The Jafar family owns both of these and has close ties to former President Bill Clinton. The UN is also tied to Gulftainer and just recently it was strongly suspected that Gulftainer was involved with Iran in shipping rockets to Gaza. The shipment were seized by Israel and the reports are classified, so it cannot be proven (yet) that this is the case. But there is an excellent chance that Gulftainer is involved in smuggling weapons and arms for and to terrorists. 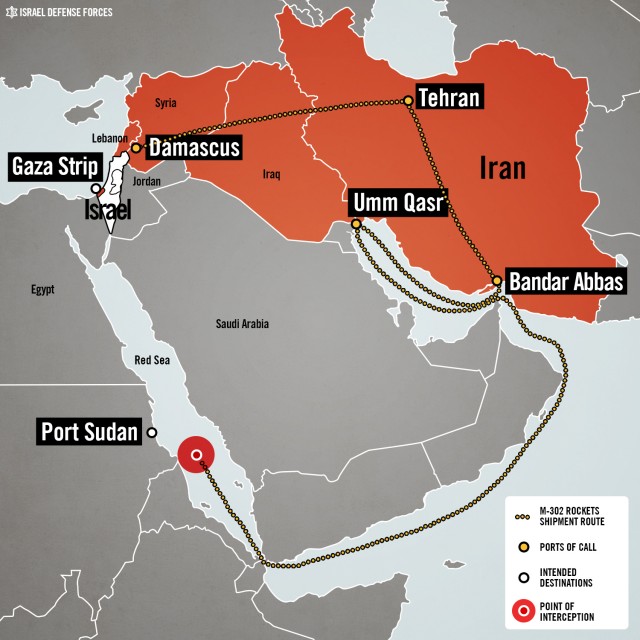 It would seem that not only do we have people in the US in the highest levels of government that could not pass a background check to clean toilets… we also have Middle Eastern countries being waived into sensitive ports without so much as the most minor of security checks. That’s like sitting on a ticking time bomb and praying that it won’t blow up like a jihadist in a Palestinian work accident. It’s insane. Port Canaveral might want to consider their hasty decision before a nuclear weapon glides into that port that could be used against the US. Just sayin’.

There are brave folks in Florida standing up to this and protesting. I’d like to close with a few pictures from this morning, courtesy of Andrea Shea King of the Radio Patriot: 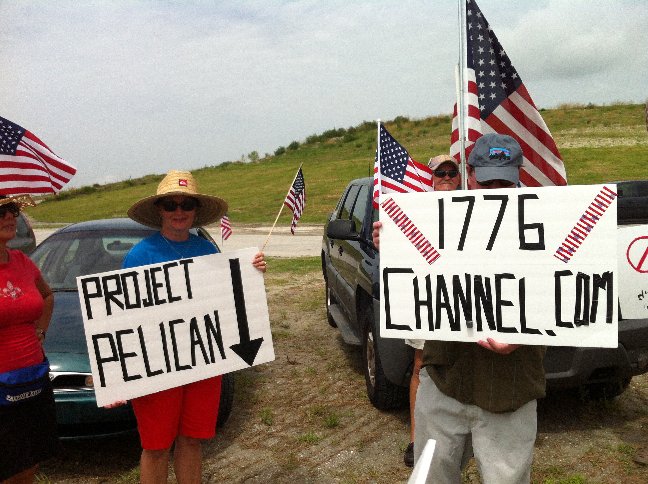 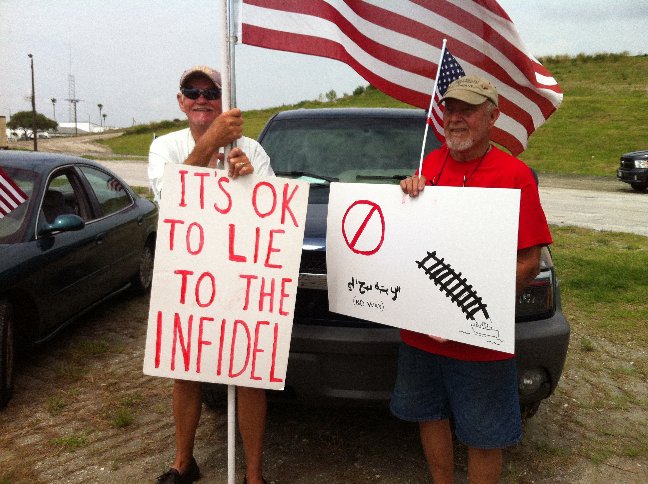 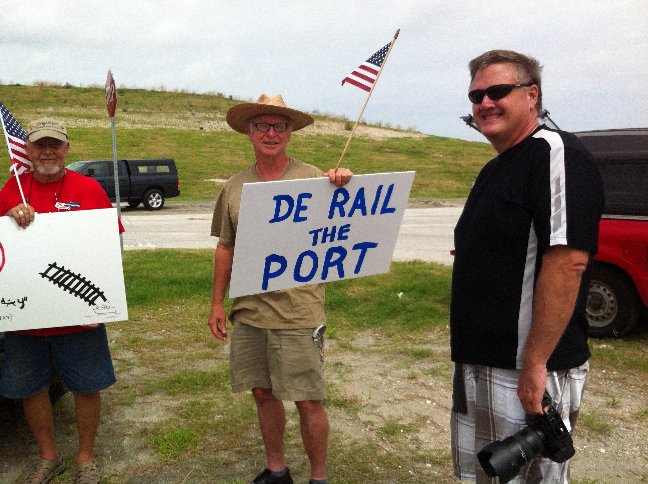 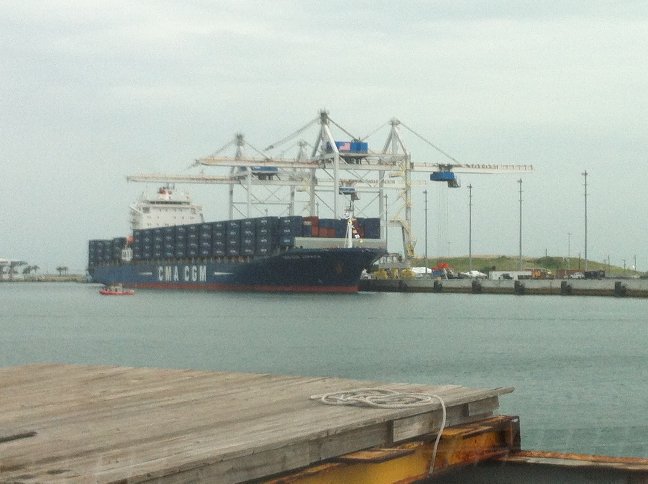