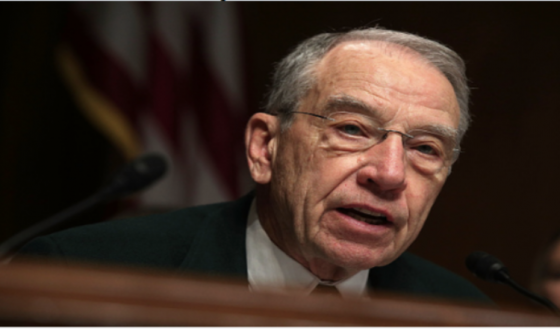 Sen. Charles Grassley is demanding answers on the Trump dossier that sought to smear the President. A point that should be examined closely is brought up here… why did the FBI offer to pay Christopher Steele for investigating Trump? Grassley wants an answer from Comey over that issue and fast. He’s particularly interested in Deputy Director Andrew McCabe and his role in the Trump-Russia affair. Why is the FBI delving into partisan politics here? A few weeks before the FBI offered to pay Steele for the dossier, the Democrats also paid him. It looks like the FBI never followed through on payment to the spy, but they were all set to pay him. What is the story here?

The FBI and the Democrats were actively investigating a political opponent. Unless there is something solid there to indicate it is a national security issue (and a serious one), that is extremely unethical and perhaps illegal. I would also like to know if there were communications on this matter between the Clinton camp and the FBI. It appears there were, which makes Comey and the FBI look complicit and very, very bad.

Sen. Charles Grassley, chairman of the Senate Judiciary Committee, has sent a letter to FBI Director James Comey demanding the story behind the FBI’s reported plan to pay the author of a lurid and unsubstantiated dossier on candidate Donald Trump. In particular, Grassley appears to be zeroing in on the FBI’s deputy director, Andrew McCabe, indicating Senate investigators want to learn more about McCabe’s role in a key aspect of the Trump-Russia affair.

Grassley began his investigation after the Washington Post reported on February 28 that the FBI, “a few weeks before the election,” agreed to pay former British spy Christopher Steele to investigate Trump. Prior to that, supporters of the Hillary Clinton presidential campaign had paid Steele to gather intelligence on Clinton’s Republican rival. In the end, the FBI did not pay Steele, the Post reported, after the dossier “became the subject of news stories, congressional inquiries and presidential denials.” It is not clear whether Steele worked under agreement with the FBI for any period of time before the payment deal fell through.

“The idea that the FBI and associates of the Clinton campaign would pay Mr. Steele to investigate the Republican nominee for president in the run-up to the election raises further questions about the FBI’s independence from politics, as well as the Obama administration’s use of law enforcement and intelligence agencies for political ends,” Grassley wrote in a letter to Comey dated March 28.

The fact that Obama would use law enforcement and intelligence agencies to further his political agenda does not surprise me in the least. But he should be held accountable for that. Hearings need to be convened over this surveillance of Trump and his associates. This is far more serious than Watergate ever was.

Grassley is gunning for McCabe. He noted that McCabe is already under investigation by the FBI‘s inspector general for playing a top role in the Hillary Clinton email investigation even though McCabe’s wife accepted nearly $700,000 in political donations arranged by a close Clinton friend, Virginia Gov. Terry McAuliffe, for her run for state senate in Virginia. “While Mr. McCabe recused himself from public corruption cases in Virginia… he failed to recuse himself from the Clinton email investigation,” Grassley wrote, “despite the appearance of a conflict created by his wife’s campaign accepting $700,000 from a close Clinton associate during the investigation.” McAuliffe is dirty as hell and here we are with Comey and the FBI again. Is it a coincidence he let Clinton walk during all this? I highly doubt it. All of the involved parties should be investigated at the very least and go to prison if found guilty of breaking the law here.