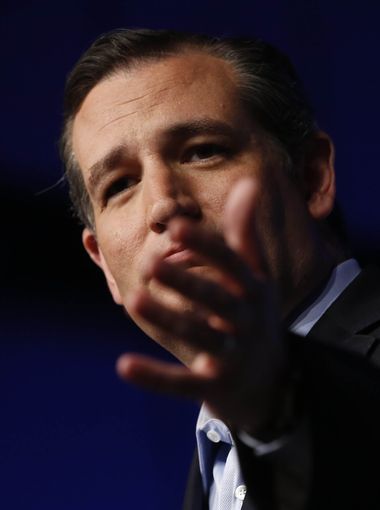 Ted Cruz has made the evangelical vote a cornerstone of his political campaign for the presidency in 2016. This week he will launch a 50 state campaign to defund the butchers of Planned Parenthood. It is a move that is sure to be wildly popular among conservatives. His father, Rafael Cruz, must be incredibly proud of this.

Cruz invited more than 100,000 pastors via email over the weekend to take part in conference calls with him starting this week, where they will be given details on a plan to mobilize church attendees in every congressional district beginning on August 30th. This followed Cruz’s Rally for Religious Liberty that drew a crowd of over 3,000 to Iowa last week. “The recent exposure of Planned Parenthood’s barbaric practices… has brought about a pressing need to end taxpayer support of this institution,” Cruz stated flatly in a call to action distributed via email by the American Renewal Project, an organization of conservative pastors. Ted Cruz is not only appealing to the evangelical vote, he’s fighting for Christians and for the lives of the unborn. His honest and obvious devotion to his Christian faith is one of the things that appeals to so many Americans. Approximately 1 in 4 voters have identified themselves as evangelical in exit polls since the 2004 election cycle. In key Republican contests such as Iowa and in some of the Southern states that Cruz has said are critical to his run, that figure was higher during the last presidential campaign — nearly 50 percent. The evangelical vote is key to Cruz’s campaign goals and strategies. He is gifted at motivating and mobilizing voters. He’s also the favorite son of the Tea Party conservatives. Cruz is just the warrior we have waited for. 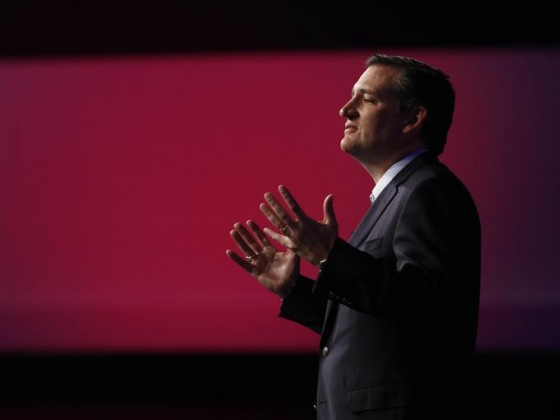 Ted Cruz’s rise as a champion for evangelicals and conservative constitutionalists was spurred on by the Supreme Court’s decision that gay marriage should be legalized in all 50 states. Add on top of that the release of hidden-camera videos by the Center for Medical Progress showcasing Planned Parenthood officials discussing the donation of fetal tissue in a seemingly cavalier fashion. Included in those videos is evidence that babies are being born alive and then killed. Some are having their hearts shocked to bring them back to life and then their brains are cut out. It’s horrific genocide and it is stark evidence of the ongoing American Fetal Holocaust. In short, it is murder on a massive scale.

Cruz is fighting for Americans on a whole range of issues. He has been the loudest voice against Obamacare. He addressed the issue of illegal immigration long ago and is still fighting it. While many of the other candidates talk a good game, Cruz walks the walk and can show how he has fought on each issue. He has the scars to prove it. In regards to the Planned Parenthood videos, Cruz has urged everyone he has met to watch them. He has savaged the Supreme Court over these issues. Cruz has argued cases before the Supreme Court and he has served as a law clerk there, so he knows all too well what goes on in those chambers. In an op-ed in USA Today, Cruz wrote that Senate Majority Leader Mitch McConnell shouldn’t schedule or allow any legislation to be heard that would give federal money to Planned Parenthood. He’s absolutely right.

Both Ted Cruz and Rand Paul have proposed defunding Planned Parenthood and are willing to stand on that issue no matter what. Even if that means shutting down the government. Any shutdown would be the fault of Democrats, who would have to be “willing to try to shut down the government in order to force continued taxpayer funding from an organization that has now been caught on film apparently admitting to multiple felonies,” said Cruz. Cruz has been there before and is not afraid to take the heat and derision piled on him over Obamacare. He’ll do it again if need be. 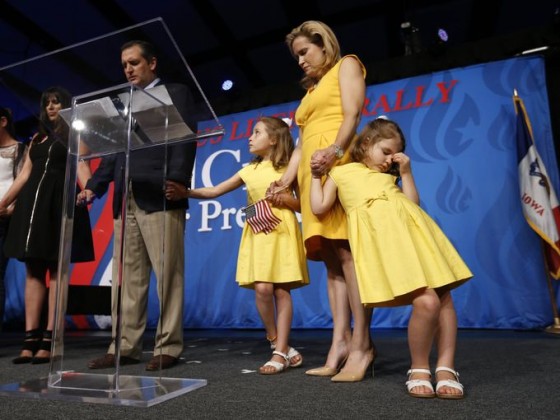 Cruz’s Rally for Religious Liberty in Iowa clearly highlighted him as the evangelical candidate in the race. There is a “war on faith,” he said, evangelical voters will “stay home no longer.” Christians will no longer be silenced and shunned as if they are somehow a sub-species here in America. We are the majority and it is time we started acting like it. Gone are the days when we are so easily dismissed and marginalized. Our voices will be heard in this next election and the shout for a return to faith and principles will be thunderous.

Cruz is especially close to Dick and Betty Odgaard, the Iowa Mennonite couple who lost their business after refusing to hold a gay wedding on their business premises. As Cruz recounted their heartbreaking story in Iowa, he held Betty’s hand. She wept as she told her story… how they could not do the wedding because it violated their deeply held Christian beliefs. The issue eventually forced them to go out of business as they were persecuted and fined by the federal government for their stance. They were expected to give up their First Amendment rights of freedom of speech and religion, so that a gay couple could have the right to be married which is not guaranteed in the Constitution, period. One by one, Cruz called on others to recount how, as Christians, they had suffered similar fates and persecution. He called them heroes. That included Aaron and Melissa Klein who refused to bake a wedding cake for a gay couple and have since been fined $135,000. They are appealing their case – again. Then there is the Former Atlanta Fire Chief Kelvin Cochran, who was fired for writing a personal book on his faith, where he wrote on the sin of homosexuality. His private writings cost him his job when a fellow employee complained.

“These threats have been growing, they have been growing for decades but never have the threats been greater to religious liberty than they are right here and now today,” he said. “These threats are not imagined, they’re not made up. These are real people leading real lives who found themselves facing persecution simply for living out their faith. There is a war on faith in America today.” “They didn’t ask for confrontation and the government came to them and said, ‘Choose between faith and obedience to government power,’ and they said, ‘I follow a higher power and that is God almighty,'” Cruz said. “If we cannot worship God, if we cannot live according to our faith …. all other liberties fade away,” Cruz said.

Ted Cruz also recounted the cases he has won that had to do with religious liberty when he was Texas Solicitor General. Cases such as fighting to keep the Ten Commandments monument on the grounds of the state capitol, which was decided in his favor 5-4 by the Supreme Court. The highest court in the land is just one justice, one vote from taking down all images of God period and stripping us of our freedom of religion. “Is the next victim of persecution your pastor?” Cruz asked the crowd. “Your charity, where you volunteer your time at a crisis pregnancy center?”

“We’re at a crossroads in our country,” said Cruz’s Iowa campaign chairman, Matt Schultz. “Ted Cruz is the man who God has prepared for this moment in time to be our champion, to fight for our husbands, our wives, our children and our grandchildren, for our country.” Voters agree overwhelmingly that we need to return to our Judeo-Christian values.

Cruz drew some of his loudest cheers when he took on Planned Parenthood. “Innocent life should not be treated as a business transaction,” he said, repeating a pledge that, if elected president, he would instruct the Justice Department to investigate and potentially prosecute the organization. Oh, I pray that is so and that it comes to pass. The butchers of Planned Parenthood should all be tried and held accountable for their heinous crimes.

In Cruz’s email this weekend to the pastors, he made a spiritual call to arms: “I am urging you to confront this evil in our nation by praying and preaching with an unbridled passion until funding for Planned Parenthood ends, and this barbaric practice is purged from the land,” Cruz wrote in his message. This is the Black Robe Regiment come to life and our time is now. This is where pastors and the faithful take a bold stance for righteousness and for life. Of course, the leaders of Planned Parenthood, such as Executive Vice President Dawn Laguens, are coming unglued over this movement. The evil that they do no longer has a dark place to hide.

Feel the fear and the hate:

“From the beginning, this relentless campaign has been about one thing: antiabortion extremists who will do anything — lie, twist facts, villainize providers, and even reportedly break the law — in their quest to ban abortion and block millions from accessing basic reproductive health care,” she said in a statement to The Washington Post. “Ted Cruz is pushing the Republican party into territory that’s further and further away from what the majority of American voters believe.”

What a lie. But this battle is just heating up. The Tuesday conference calls with pastors will begin with a message from Cruz, who will be followed on the call by Doug Stringer, a pastor who works with American Renewal and Response USA to plan statewide prayer rallies at the request of conservative governors such as Jindal and Perry. Cruz will lead the fight while campaigning for the presidency. His fundraising efforts are only second to Jeb Bush. And the basis of Cruz’s donations are comprised of hard money that comes from voters in small amounts.

Cruz’s campaign has spent the past few months mobilizing his base, assembling coalitions and courting activists on the ground in Iowa and throughout the South. He spent mid-August on a 20-stop, seven-day bus tour across the South that included events at multiple churches and his campaign announced last week that it intends to have a pastor doing faith outreach in all 99 of Iowa’s counties. Cruz’s father Rafael, a pastor, has been traveling the country all year speaking to voters of faith. Now, that effort will be broadcast nationwide.