Political scientists at The New York Times and Vox are baffled by the thousands of recent incidents of a disease termed Sudden Islamic Combustion Syndrome (or “SICS”). 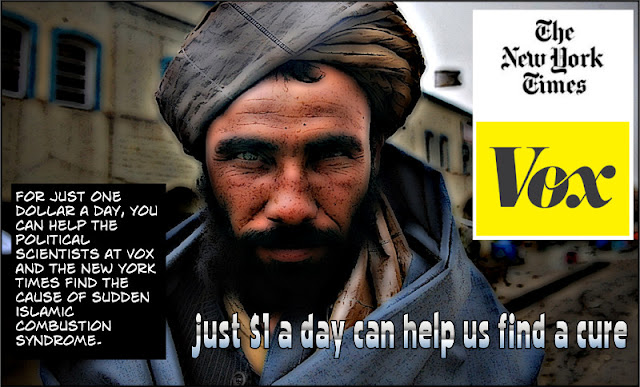 Voxsplainer and political commentator Ezra M. Klein III recently lobbied Congress to fund a worldwide effort, led by the United Nations, to find the root cause of SICS.

“We have yet to find a root cause or some underlying pattern that would explain why certain individuals suddenly detonate, killing individuals around them, often with oddly shaped pieces of metal that resemble nails and shrapnel,” said Klein.

“It’s imperative that we find a root cause, because there’s no discernible pattern to SICS. There’s no particular ideology, faith, or military cult packaged as a religion that we can tie back to the disease.”

In the mean time, The New York Times and Vox have teamed up to create a charitable foundation and slush fund that a spokesman said will devote a “significant percentage” of its revenue to finding a cure for SICS.

Contacted at her home in Chappaqua, Democrat presidential candidate Hillary Clinton supported the effort to research SICS and also stated that “gun control may be the answer.”