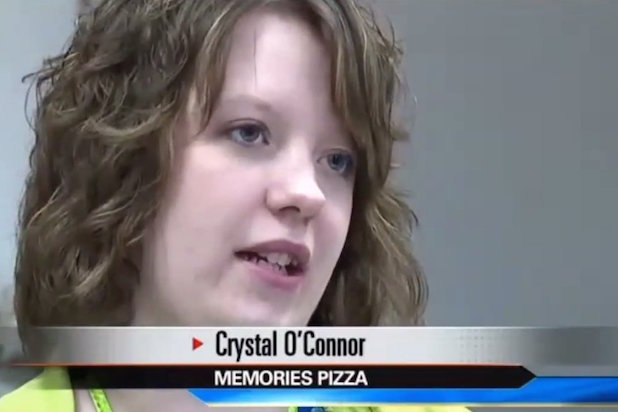 Patriots, we did it! We raised over 840 grand expressing our love, support and solidarity with Memories Pizza – a Christian owned business temporarily closed down due to extreme harassment from the Left. http://bit.ly/1NNMtn3

The Blaze TV host Dana Loesch came up with the idea of a fundraiser for Memories Pizza, targeted for destruction because of their beliefs in support of traditional marriage. National talk radio hosts Glenn Beck and Rush Limbaugh picked up Dana’s baton and ran with it.

What struck me most about the initiative was the self-less unity. Conservatives of varying stripes came together to lift up a wounded brother (Memories Pizza) in the battle for liberty and freedom. In essence, conservatives across America said to Memories Pizza, “Hang in there bro, we got your back.” Awesome! This is how we win this battle for our freedom folks. This is how we push them back.

The fundraiser felt like a project of our national conservative family. I was excited about participating; eager to do my part. Mary does our on-line transactions. The moment she awoke, before she could pour her first cup of coffee, I asked her to go to the website and contribute. When she told me it was done, we felt great.

But folks, what really warmed my heart is the fact that we did it together. United we stand, divided we fall sounds cliche. However, it is so true. Look at the power we have when we work together.

“Its amazing what you can accomplish when you do not care who gets the credit” Harry S. Truman

Twenty years ago, I produced a similar feel good initiative. Working on a song in the recording studio late one night, a ten year old kid knocked on the door asking for money. Frank Starchak my music producer said the kid had bad parents and was on the road to becoming a juvenile delinquent.

That night, I dreamed of various singers and bands coming together, laying aside their egos to record “Amazing Grace” in their own style (musical genre). I sent out a clarion call to the Maryland music community. We recorded a unique version of the classic hymn. All proceeds from sales of the recording benefited a youth center run by a Catholic nun, Sister Bobby. Please give it a listen. http://bit.ly/1D3GcQG

There is a verse in the Bible that says they meant it for evil, but God meant it for good. Clearly, the Left’s attack on Memories Pizza was an evil attempt to destroy the Christian owned business.

God used the Left’s attack to bless not just Memories Pizza, but give a must needed shot of feel-good inspiration in the arm of the Tea Party movement.

A patriot called a national talk radio show to say she and her husband plan to trek to Memories Pizza to celebrate their wedding anniversary. What a great idea.

Brother and sister patriots, together, we did it! United we stand, divided we fall.