“Go back to Univision” is how Donald Trump handled Mexican-American “journalist” Jorge Ramos when he tried to disrupt a Trump news conference. When Hillary Clinton compared Republicans to terrorists, the Republican National Committee asked for an apology. This contrast demonstrates why Trump is doing so well and the Republican Party, in general, is doing so poorly.

On the Megyn Kelly Fox News show on Thursday night, much was made of the fact that Hillary had made her comparison between Republicans and terrorists as she was looking at her notes. In other words, Kelly and her guest concluded, it was a deliberate insult. Of course it was. Why was this a surprise? Mrs. Clinton had returned to her roots as an Alinskyite, someone who demonizes her opponents as a deliberate strategy. Why can’t conservatives get it through their heads that Hillary is a committed leftist who can be just as good as Obama when it comes to poisoning the public discourse for political purposes?

Republican National Committee (RNC) Press Secretary Allison Moore said, “For Hillary Clinton to equate her political opponents to terrorists is a new low for her flailing campaign. She should apologize immediately for her inflammatory rhetoric.”

What is the point of such a statement? Does the RNC seriously believe Hillary will consider apologizing to Republicans? What the RNC should have said is that Hillary was back to using Alinskyite tactics, which she learned about in college, and that the use of such a strategy demonstrated her grounding in a form of Marxism. The RNC could have said that the American people have had enough of these divisive tactics from Obama, who has come close to inciting a race war in the United States, and that the public cannot tolerate another un-American presidency in which a top Democrat equates political opponents to foreign enemies.

As we argued more than two months ago, you have to study Marxism to understand Hillary. It is apparent the RNC hasn’t done its opposition research. Despite her love for money, Hillary is as much of a leftist as Barack Obama. She studied Alinsky in college and went to work as an intern for a law firm that employed communists. The best source of information on this is Hell to Pay, a book on Hillary by Barbara Olson, who told me in an interview in 2000 that she expected Mrs. Clinton to run for president and that her political background made her a “budding Leninist” who understood the concept of acquiring, accumulating and maintaining political power at any cost. In the same vein, she is determined to destroy the Republicans at any cost. Joe Biden has to understand this side of Hillary. It may be one reason why he is reluctant to jump into the presidential race against her. With a history of plagiarism and embarrassing off-the-cuff remarks, Biden could be torn apart.

Hillary Clinton has the blood of four Americans on her hands over her handling of Benghazi. Yet, she compares Republicans to terrorists? And the RNC responds by asking for an apology? This is almost comical.

Trump doesn’t ask for apologies. He fires back any way he can. That’s why, despite questions about his ideology and even religious views, he strikes a chord. The American people have watched their country being destroyed from within for seven years and they are tired of politicians responding with hearings, investigations and requests for apologies. They can’t figure out why Obama hasn’t been impeached by now. They want someone to tell it like it is about the deterioration of our nation and those responsible for its demise.

What Trump has done, on so many occasions it is difficult to count, is to finger the media for their role in the destruction of America. Can you believe he actually accuses liberal reporters of being dishonest? He actually mocks and ridicules them to their faces.

Univision deserves scorn. It is a “news” organization that openly targets Trump and he has the guts to counterattack when one of Univision’s hired guns shows up at a Trump news conference for the purpose of making a spectacle of himself and trying to embarrass Trump. “Go back to Univision” is precisely the comment that Ramos deserved. If anything, one can argue that Trump was too nice for inviting the advocacy journalist back to the press conference.

The Los Angeles Times calls Ramos “the Spanish-language Walter Cronkite,” and suggests that the confrontation could somehow “prove dangerous for Trump, who thus far been something of a Teflon candidate.” This is the obligatory reference to how Trump has opened himself up to the charge of racism for putting the obnoxious Ramos in his place. Later in the article, we read that Ramos’s daughter is working for Hillary Rodham Clinton’s presidential campaign, but Ramos “has said her job doesn’t affect his work.” Sure. Now we have another example of why Trump calls the media dishonest.

As for the comparison with Cronkite, the long-time CBS Evening News anchorman was as much of a fraud as Ramos. Cronkite undermined the war against communism in Vietnam and used his newscast as a soapbox to argue against President Reagan’s military buildup to counter the Soviets. Cronkite’s FBI file showed he was a dupe of the Soviet intelligence services, who could be counted on to promote Soviet objectives. After he retired, he showed up at a World Federalist meeting to accept an award and endorse world government through the United Nations. Hillary was there via videotape to thank him.

Ramos should ask for an apology from the Los Angeles Times for being compared to Walter Cronkite. I’m joking, of course. They are both disgraces to the journalism profession.

Ted Cruz Not Happy With Question From Megyn Kelly, Says It’s What ‘Liberal Journalist’ Would Ask

If Fox News/Megyn Kelly can act in such a way, what can we expect from the mainstream media?

Megyn Kelly who has, apparently, come out of the closet in order to let us know that she can be as much of a leftie as her colleague Chris Wallace—and certainly her friends at CNN and MSNBC—when she asked questions and made several scathing comments that could have been devastating to Trump and ended his candidacy. 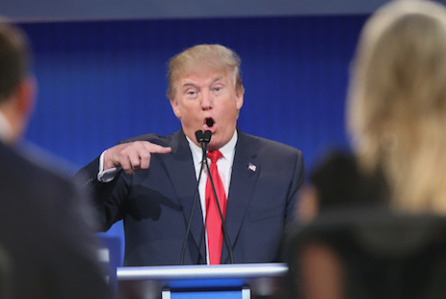 Deadline.com: CLEVELAND, OH – AUGUST 06: Republican presidential candidate Donald Trump fields a question during the first Republican presidential debate hosted by Fox News and Facebook at the Quicken Loans Arena on August 6, 2015 in Cleveland, Ohio. The top ten GOP candidates were selected to participate in the debate based on their rank in an average of the five most recent political polls. (Photo by Scott Olson/Getty Images)

Kelly would then—ostensibly–have the leftist street creds to laughingly say to friends at in-home and other cocktail parties, ”I took him out!” That is, she could have… if the “facts” about one of the question/comments she made had been true in nature. But… they were not. Note: If it helps their cause, Leftists are seldom to never concerned about facts. But, most of the American people still are.

Kelly—once one of my favorite news anchors—is no longer thoroughly checking her source material. In times past when anchors played fast and loose with the facts in order to satisfy their own—and/or their network’s—agenda, that would mean being fired from their job. Remember what happened to—even—Uber-liberal Dan Rather? If not, look it up. What occurred with Kelly’s castigation of Trump is this.

On the Celebrity Apprentice show, Bret Michaels told Trump that his teammate Brande Roderick had gotten down on her knees and told him (regarding some role she was to play on the team) “I passionately want to do this.” Trump—a bit incredulous—asked Michaels if she had really gotten down on her knees. Michaels said yes and Trump along others in the room laughed “I’d like to have seen that.” That was it. You can see the full video exchange in the reference link below this column.

Folks, this is beyond the pale. This is what once-honorable people have fallen into—destroying for the sake of gaining notoriety for themselves. And, as we saw last Thursday night, these behaviors are no longer only practiced by the Democrats. The Left-Wing of the Republican Party and its minions are now doing the same. Now, even they are willing to sell what’s left of their souls for a little applause from their less-than-honorable colleagues and—likely–a pay raise. And with this behavior at the debate (a “debate” that was between the media and the candidates) Fox News is now solidly in the Marxist/Islamo-Nazi camp with the other cable channels. And Trump’s understandable and reasonable response to Megyn’s attack with false claims is now the one being vilified by the leftist media!

Is the USA still worth saving? More and more, I find that I’m asking myself that question.
Commandment IX: “Thou shalt not bear false witness against thy neighbor”

BizPac Review story below, video below that:

Did Fox News conspire with Jeb Bush, Karl Rove, and Valerie Jarrett to attack Trump in the first debate?

Given the carnival of a debate, during which the Fox moderators spoke more than any candidate, is it so hard to believe?  The cabal that runs Washington, Democrat and Republican, fears nothing more than an outsider who doesn’t owe them favors.

Rove was George W. Bush’s special advisor for years, going back to Texas.  He’s been a sleazy political operative for decades.  After the White House, he managed to weasel himself into a position of prominence at Rupurt Murdoch’s (an Australian socialist) Fox News.

Here’s a picture of Jeb, Murdoch, and Obama’s “Special Advisor,” the Iranian-born Valerie Jarrett.  The cabal photographed at dinner… only person missing is Karl Rove.

News Corp, the parent company of Fox News, hired Toni Cook Bush (not the same Bush family) to be Executive Vice President and global head of government affairs.  She is a cousin to Valerie Jarret.

A recent article in Politico details the envy and frustration of Jeb Bush, who never expected to have to catch up to Trump in the polls.  There’s your potential motive.

It is doubtful that Trump will be knocked out by Jarrett’s puppet, Megyn Kelly.

But this first debate, and the ensuing internecine GOP arguments, may be enough to ensure that another Democrat – Hillary – is elected in 2016.

If this happens, we have only Fox News to thank.