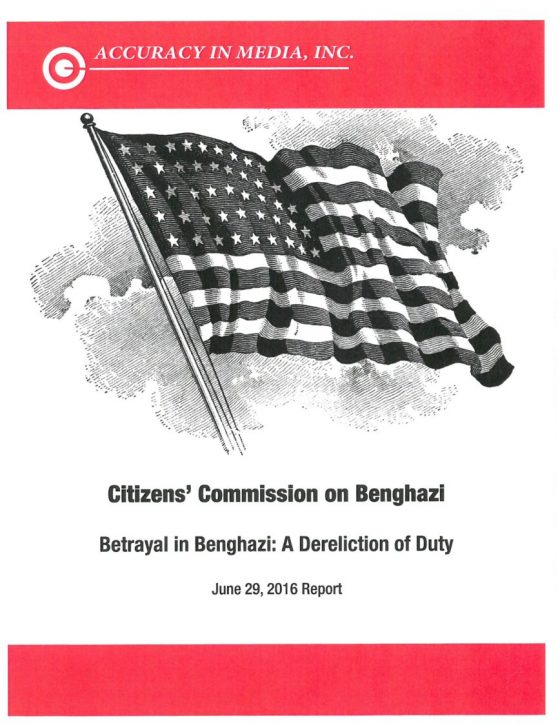 On June 29, the Citizens’ Commission on Benghazi (CCB) held a press conference at the National Press Club in Washington to discuss the release of its new report on the events surrounding the September 11, 2012 terrorist attack on the Special Mission Compound and CIA Annex, resulting in the deaths of four Americans. As usual, the liberal media largely stayed away. Apparently, if The New York Times, CNN, the Associated Press and NBC don’t cover a story, no matter how important, it isn’t really news. So instead, the only representative from the mainstream media was The Washington Post’s designated hit man, Dana Milbank, who regularly trolls conservative gatherings to heap scorn, sarcasm and peddle misinformation to his waiting readers. That is the sad state of journalism in this country today.

Mr. Milbank’s penchant for playing fast and loose with the details has gotten him in trouble before, when he claimed that conservative speakers had “taunted” a young Muslim girl. These speakers had, in fact, thanked her for her presence. In the latest case, Milbank wrote an opinion piece, not a news story, with the online headline, “Benghazi Conspiracy Theorists Turn on Trey Gowdy.” The headline in the print edition of the paper was “Appeasing the far right? You’ll always end up wrong.”

During the course of Milbank’s article, he called the members of the CCB “a coalition of far-right ­foreign-policy types,” “conspiracy theorists,” and “agitators.” This is all part of the attempt to discredit the messenger, because Milbank can’t really dispute the message—although he has certainly tried. But at least he was there, and spelled the names correctly, though he was wrong about the number of members on the commission (it’s 14, plus two advisory, not 11). Apparently the Post’s Fact-Checker was busy on other stories that day. Maybe they should hire more.

Milbank found our report to be what he called “full of inventive accusations.”

“They found ‘troubling evidence that Obama and Clinton were deeply and knowingly involved in running guns to al-Qaeda in Libya,’” writes Milbank, “as well as ‘a clear case of official U.S. government submission to the Islamic Law on slander.’”

“They determined that the Obama administration ‘switched sides in what was then called the Global War on Terror’ and ‘benefited this country’s worst enemies,’” he continues. “They wrote that Clinton herself blocked U.S. military forces from attempting a rescue mission, and they attributed the decision to oust Libya’s Moammar Gaddafi in part to financial interests of the Clinton Foundation.”

When Milbank quotes from the CCB’s findings, the obvious inference is that he finds these points to be baseless—and believes they could only originate from the minds of right-wing conspiracy theorists. The findings in the CCB’s latest report are, indeed, very damning accusations. But we back them up in every case, and encourage people to read the report and judge for themselves. Our military and intelligence experts—former admirals, generals, colonels, congressmen and CIA officers—are people with vast service to this country and outstanding reputations.

In particular, we have repeatedly demonstrated that the Obama administration decided to send arms to the Libyan rebels, who themselves were affiliated with al Qaeda and other jihadists. This ultimately contributed to the death of our Ambassador at the hands of Islamic jihadists, and Libya’s transformation into a terror safe haven.

It is Milbank who is being played for the fool by not looking at the evidence.

Apparently he doesn’t believe that Hillary Clinton, or anyone else, for that matter, “blocked U.S. military forces from attempting a rescue mission.” Yet American military assets were not sent to aid those in Benghazi. The Americans in Benghazi were left to withstand multiple terror attacks on their own, lasting approximately 13 hours from start to finish .

That is why the testimony from Gen. Tom McInerney is so compelling. He led the air attacks into Libya in 1986. Admiral Ace Lyons, another member of the CCB, commanded more than 250,000 troops at one time as commander in chief of the Pacific Fleet of the U.S. Navy—while Dana Milbank was giving secret handshakes and who knows what else at Skull and Bones meetings at Yale.

If Milbank had wanted to actually read our report and challenge it on a factual basis, I could respect that. But all he wanted to do is make disrespectful, cutting comments that cast a slur on others while having no basis in fact. When it comes to knowing whether military assets could have been brought to Benghazi that night to attempt to save lives, whom are you going to trust—Milbank or McInerney? Does anyone really believe they couldn’t have gotten there if ordered to do so? And why, with multiple warnings of a terrorist attack in Benghazi in the weeks leading up to September 11, 2012, weren’t military assets on high alert, prepared for such an attack?

Jerome Corsi at WorldNetDaily did read the report, and he wrote a different sort of articleilluminating the dereliction of duty by the Obama administration.

“[Clare] Lopez charged Clinton’s role in the Benghazi debacle was ‘pivotal,’” writes Corsi. “She said that under Clinton’s leadership, the State Department ‘changed sides’ in the war on terrorism in Libya.”

Far from a baseless accusation, Clinton’s pivotal role can be seen in her aide, Jake Sullivan’s email that Clinton had “leadership/ownership/stewardship of this country’s Libya policy from start to finish.” Yet somehow we are supposed to believe that Mrs. Clinton ignored Libya after Qaddafi’s death, and missed 600 requests for additional security. That’s what she told the House Select Committee on Benghazi when she testified last October.

The military dereliction of duty in Benghazi is shocking, as well. “So we had no pre-planning of the possibility of a terrorist attack in the region on that day and while the attack was underway no U.S. military assets were moved into action,” said McInerney. “At least a fly-by over Benghazi could have been arranged, with F-16s using full after-burners that could have dispersed the terrorists and ended the attack.”

Corsi recounts how Charles Woods, the father of Ty Woods, spoke at the June 29 press conference, and asked to know who is “responsible” for his son’s death. Ty was a former Navy SEAL who was part of the CIA Annex Security Team. In fact, I hope every American will get the chance to watch the movie “13 Hours: The Secret Soldiers of Benghazi.” It is available on demand on most cable TV services. I attended the premiere last January in Dallas.

Jennifer Harper of The Washington Times also highlighted the new report from the CCB.

Regrettably, without even attending the event, MSNBC repeated some of the lies perpetuated by Milbank. “This is what it’s come to: Benghazi conspiracy theorists are so creative, and so unmoved by evidence or reason, that they can convince themselves that congressional Republicans are in on the conspiracy,” writes Steve Benen for MSNBC (emphasis in original).

As my colleagues and I explained at the press conference, Select Committee on Benghazi Chair Trey Gowdy (R-SC) had an unparalleled opportunity to explain the attacks, connect the dots and hold people accountable. Instead, he and the remainder of the GOP members largely acted as stenographers rather than investigators. Representatives Jim Jordan (R-OH) and Mike Pompeo (R-KS) provided a supplemental report more willing to place blame, and at the press conference on June 28 when their report was released, Pompeo called Mrs. Clinton’s actions “morally reprehensible.” But when it came to passing judgment, Gowdy took a pass.

This has allowed the mainstream media to claim that despite an exhaustive investigation, no new revelations have been found that implicate Hillary Clinton. For Benen, his headline reads that Clinton has been “exonerated.” But no new revelations were necessary to demonstrate the ongoing Benghazi cover-up.

You can read our new report or watch our entire June 29 press conference here: