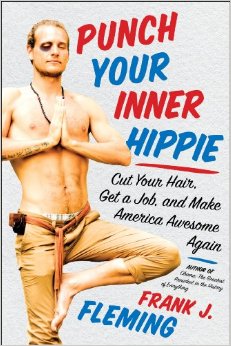 Purchase at Harper Collins or Amazon.com

Frank J. Fleming had me at the title… revel in the awesomeness: Punch Your Inner Hippie: Cut Your Hair, Get a Job, and Make America Awesome Again. In America’s current political climate, this book cuts the crap and gets right to it.

With communists, radicals, terrorists, Progressives and every other kind of loser trying to take America down, it’s time for all of us to get a grip and smack some sense into ourselves. We live in the greatest nation the planet has ever known, but that won’t stay true unless we fight and defeat the enemies from within and without. That includes any liberal tendencies each of us has.

Digging past all of our woes, at the bottom of our problems lies… wait for it… hippies. Yep, stinky, hairy, foul, lazy, whiny hippies. Hippies morph into communists who then destroy nations. Don’t believe me? Dare to read Punch Your Inner Hippie and open your eyes. The fight starts inside each of us and then you move on to the hippies surrounding everyone. Seriously, the 60’s saw the birth of a malignant force that has metastasized and needs removal.

Punch your inner hippie every day and ascend to greatness.

From Punch Your Inner Hippie:

So I was working with someone who was really trying to tap his full potential, but his inner hippie kept pulling him down any time he tried to succeed. I think he was an accountant or something—all these people complaining about their problems just blend together. Anyway, let’s call this man “Bob,” as that’s what I called him. I told him, “Bob, if you want to get anywhere in life, you first need to defeat your inner hippie.”

“Well, I can punch you,” I said, “and I will, because I like to help. But I won’t always be there. Instead, we need to find a way for you to really lay the smackdown on your inner hippie to silence its call to failure, and doing that will take some extreme measures. Come with me, Bob.”

I took Bob to the zoo after hours and headed toward the gorilla pit. “See that gorilla, Bob?”

Bob thought for a moment. “Not really . . . except he probably doesn’t bathe regularly.”

“Correct. A gorilla is nothing like a hippie,” I said, “and yet here is the thing: I want you to go punch him.”

From the back of the book:

The author of the e-books Obama: The Greatest President in the History of Everything and How to Fix Everything in America Forever explains how Americans can finally overcome the insidious legacy of the 1960s.

As Frank J. Fleming reveals in this delightfully sarcastic self-help book, every American has a little hippie inside, preaching free love and poor hygiene, and keeping him from achieving his full potential. It’s a relic from the 1960s, kept alive in acid flashbacks and pop culture, which affects decision-making in unconscious ways. The only solution is to punch that inner hippie as hard and as often as possible.

Punch Your Inner Hippie hilariously explains how to understand and defeat your inner hippie. Fleming looks back at history to describe all of the civilizations ruined by hippies and to warn of the destruction in store for the U.S. if they are not stopped. He reveals the symptoms of hippie-ism, from laziness and dependence to whining and protesting, so you can gauge the strength of your own inner hippie.

Fleming also shows you how to beat your inner hippie by constructing a tank of awesome out of the four parts of being awesome: Independence, Gratitude, Ambition, and Confidence. If you punch your inner hippie every day, it will eventually be too broken and defeated to move, and you will finally become as awesome as America.

I’m officially throwing away every other self-help book I have. This is the bomb. Humor and sarcasm mix deliciously to make you laugh, cry and slap yourself silly. I have decided to exorcise my inner hippie once and for all. It’s a hippie cleanse pure and simple. Your sheer awesomeness will know no bounds once you read and apply this book. Never mind the bruises — you’ll be king or queen of the world!

This is a funny book and I love it! If you don’t buy this book, you risk succumbing to the dreaded hippiness. Must. go. buy. now. 😉