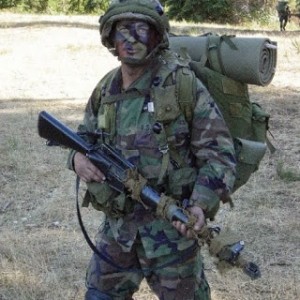 Going through Facebook this morning I glanced at a photo taken of a friend, Ryan Scott Welch, as he posed during a war games exercise.  My thoughts turned back to that time when I was in the Army.

My MOS was as a Military Policeman; but a lot of the training was geared toward general Infantry situations.

After months of training we were tested on a combat course designed to challenge nearly every thing we were supposed to have learned.  It was a long time ago and some of the details escape my memory; however, we went out in teams of four or five men and had to navigate our way through hostile territory.  There were trip wires to avoid, holes to get around, bad guys hiding in bushes, snipers in trees and all manner of traps that, had they been ‘real’, could get you sent home in a body bag.

I’m proud to say our team made it through the arduous course without a hitch, having neutralized all attempts to kill us off.

An officer greeted us at the end of the war games course and congratulated each member of the team for having done a good job.  He explained that we’d need to go through a debriefing, a chance to critique and improve the course for future training opportunities as he pointed us in the direction that led to the debriefing tables.

About five or six yards down the path, while we were still congratulating ourselves, we accidentally snagged a trip line.  A loud blast knocked us to the ground as a booby trap exploded.

My first thought, one which seemed appropriate at the time, “Man, that’s just not right.  We already finished the course”   It should be noted the language used may have been less than Church Standard; but you get the idea.  I don’t think any of us could hear for a several minutes as the blast effect lingered.

After letting us regain our bearings we were given some valuable information, something we hadn’t considered.  He made sure he had eye contact with us, a long meaningful few moments before saying, “Men, you just got a free pass.  That could have been the last sound you heard in this life.  Remember…”, holding us riveted with his eyes, “until you’re out of the Army and home sleeping in your own bed; never relax or let down your guard.  The moment you do you’re dead.  You are always a target”

That lesson applies to everyone, at least in a general setting.

While going about this probationary state, mortality, as given by our Creator, there will be many challenges to… I was going to say, getting out alive; but that really isn’t applicable, now is it?

We are to endure to the end and return home, having followed the commandments and having served with honor.  Our Father in Heaven knows the challenges we face; so does the Adversary.  Never relax or let down your guard.