Whistleblower: Feds Shut Down Terror Investigation That Could Have Prevented San Bernardino Attack

In the wake of the horrific terror attacks in San Bernardino and Paris, the FBI said it lacks the funds to stay ahead of the escalating terror threats right here in America.  So why would we want to divert any of our tax dollars, which should be directed to reinforcing our nation’s security and intelligence apparatus to protect our families and our nation, to opening the gates to refugees from terror-supporting nations whom we CAN NOT vet and whose ranks ISIS and other terror organizations target to infiltrate?

This Monday and Tuesday, we must flood the offices of our US Representatives and Senators with calls (US Capitol Switchboard: 202-224-3121) urging them to vigorously oppose Refugee Resettlement Funding contained in the Omnibus Spending Bill that will be voted on by 12-11-15!

Then make 4 more calls to insist the same:

Tell your Members of Congress IN NO UNCERTAIN TERMS THAT YOU WANT THEM TO SUSPEND REFUGEE RESETTLEMENT FUNDING IMMEDIATELY.

“I support Governor Snyder’s decision to suspend efforts to relocate Syrian refugees to Michigan, and have cautioned against the Administration’s decision to increase the number being admitted into the U.S.  …terrorist organizations like ISIS are looking for any and every opportunity to exploit a nation’s hospitality to carry out their barbaric attacks against the innocent. Anyone who says we can adequately and safely vet these refugees is wrong because there is no database in Syria and no way to identify who’s who.

THIS IS THE MOST IMPORTANT NATIONAL SECURITY ISSUE OF OUR TIME. If you don’t want unvettable refugees from terror-supporting countries in your neighborhood, you must raise your voices NOW. The immigration industry is a powerful lobby and private resettlement contractors have the authority to send refugees to any town, city, neighborhood or location without public notification and local consent.

Syed Farook was the son of Pakistani divorced parents. Syed’s wife, Tashfeen Malik was also Pakistani. Syed was born in Chicago, raised in Southern California and they met online via a Middle Eastern dating service. Tashfeen arrived in the United States with a Pakistani passport via a (K1)fiancé visa. Syed is a Sunni Muslim according to yet another dating site. 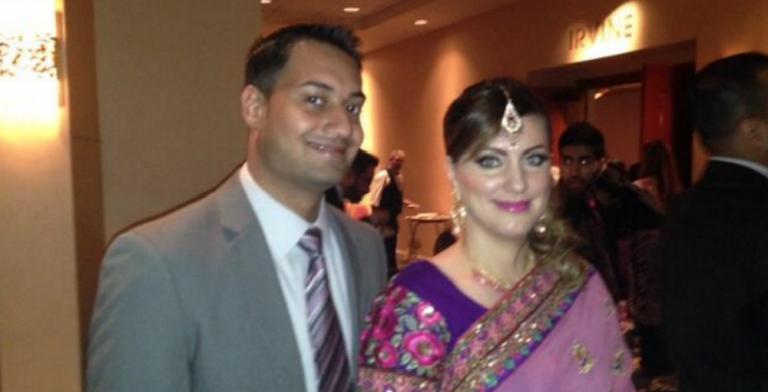 The marriage took place 2 years ago when Syed traveled to Saudi for two weeks to attend the Hajji. Tashfeen was living in Saudi Arabia at the time.

Syed traveled to Saudi Arabia and Pakistan in 2014 and returned in July of 2014. Upon the recent return from Saudi Arabia, Syed grew a beard which is an early gesture of subscribing to jihad. It is uncertain when and if he traveled again to Saudi in 2015, as it has been said he recently returned and subsequently participated in a workplace baby shower and a 2 month long paternity leave. The baby is apparently 6 months old and during the massacre was left with a grandmother.

Syed has a brother with the same first name but a different middle name.

LATimes: Years before he was associated with the deadly mass shooting in San Bernardino, Syed Rizwan Farook endured a turbulent home life, according to court records.

In 2006 divorce filings, his mother detailed a violent marital history in which her children often had to intervene.

Rafia Farook said her husband of 24 years was physically and verbally abusive and was “negligent and an alcoholic,” according to documents filed in Riverside County Superior Court. Her husband, she said, forced her and three of her children to move out. They moved into an Irvine residence.

Later, in multiple requests for domestic-violence protection, Rafia Farook detailed the maltreatment she said she encountered and that her children witnessed: Her husband had once drunkenly dropped a TV on her. Another time, he pushed her toward a car. After a drunken slumber, he shouted expletives and threw dishes in the kitchen.

“Inside the house he tried to hit me. My daughter came in between to save me,” she said about one incident. Police were not called to the home, she said.

“He is always mad,” she said. “Screaming on me, shouting at my kids for no reason. … My son came in between to save me.

When her husband was served with legal separation papers, he was reached at an address in Karachi, Pakistan.

At this time, she said her sons, Syed Raheel Farook, then 23, and Syed Rizwan Farook, then 20, lived with her, along with her younger daughter. Another daughter, Saira, apparently lived elsewhere.

The killer couple were in possession of 4 weapons, all purchased legally, the dates of purchase are unknown. (2) 9mm handguns were purchased by Syed but the long guns were not. The name(s) of the person who purchased the long guns is at this time also unknown. The long guns used .223 rounds.

San Bernardino Police Chief Jarrod Burguan said that Syed Rizwan Farook and his wife, Tashfeen Malik, fired between 65 and 75 rifle rounds during the shooting at a county health department holiday party, then unloaded about that number in a later confrontation with police.

Syed Farook’s brother-in-law, Farhan Khan appeared almost immediately after the shooting event standing with The Council of American Islamic Relations (CAIR) for a press conference stating this was a shocking event.

There were clustered pipe bombs at the public building where the shooting took place, there were failed pipe bombs in the rented SUV that had Utah tags and there were even more pipe bombs located at the residence.

Syed became radicalized online using social media and phone calls to known terrorists which has been determined after the shooting. Neither were ever on a no-fly list or terror list.