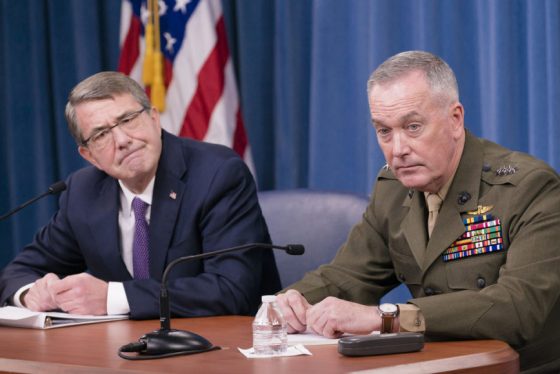 When men dress as women and serve openly in the U.S. military, there are bound to be problems identifying these people. But don’t worry. The National Lesbian & Gay Journalists Association (NLGJA) has come to the rescue. This special interest group, backed financially by all the major media organizations, has issued special guidance in the form of an “open letter” to the media on how the “transgendered” are supposed to be covered.

In other words, forget about someone’s DNA, the scientific and objective measure of one’s gender and sexual identity. The “open letter” makes that clear, noting that someone’s sex “assigned at birth” is not relevant to one’s “gender identity.”

We are told that the term “transvestite” is an “antiquated term” and should be avoided.

Transvestite or cross-dresser are terms that used to refer to Corporal Klinger wearing dresses and women’s hats as a character on the comedy show M*A*S*H. It was his attempt to get discharged. Today, in real life, Obama’s Defense Secretary Ash Carter hasannounced the transgendered can serve openly without fear of being discharged.

Under the Constitution, the Congress is supposed to make the rules and regulations for the Armed Forces. Article I, Section 8, clause 14 says, “The Congress shall have Power To …make Rules for the Government and Regulation of the land and naval Forces….”

Our media reported the policy change without explaining on what basis, legal or constitutional, the change was made.

CNN simply said Carter had removed “one of the last barriers to military service by any individual,” and that he “had been studying the issue for almost a year.”

The New York Times said, “The decision pushes forward a transformation of the military that Mr. Carter has accelerated in the last year with the opening of all combat roles to women and the appointment of the first openly gay Army secretary.”

On what basis, however, can Carter or his boss Obama “transform” the military? The original ban on homosexuals in the military was changed through congressional action. There has been no congressional lifting of the ban on the transgendered.

Columnist and radio commentator Bryan Fischer noted that “President Obama and the Pentagon have violated the Constitution and committed an impeachable offense by unilaterally admitting transgenders, transvestites, and transexuals into the military.”

Tony Perkins of the Family Research Council noted that the enormously unpopular and disruptive policy is being implemented “without Congress’s approval.” Such a move has constitutional and legal implications.

House Committee on Armed Services Chairman Mac Thornberry (R-TX) issued a statement questioning the change, but did not assert the constitutional requirement that the new policy be approved by Congress before taking effect. Once again, Congress has abdicated its responsibility.

This is, of course, no concern to the NLGJA, which monitors the media to make sure not that the Constitution is followed but that the demands of the gay lobby be met.

Thornberry says that “when we learned DOD was looking at new policies on the service of transgender individuals, the Committee posed a number of questions to DOD. In particular, there are readiness challenges that first must be addressed, such as the extent to which such individuals would be medically non-deployable. Almost a year has passed with no answer to our questions from Secretary Carter.”

How’s that for an executive branch out of control and showing complete disdain for Congress?

Senator Jim Inhofe (R-OK), senior member of the Senate Armed Services Committee,called for hearings, saying that the military “is facing historic readiness shortfalls, putting our service members’ lives at greater risk.” Instead of addressing these problems, Inhofe noted that the Obama administration is “forcing their social agenda” through the Department of Defense.

Inhofe did not question the legal or constitutional basis of what Obama and Carter had done.

Perhaps a hearing will attempt to answer the questions posed by Roger Severino of The Heritage Foundation:

One of these questions has already been answered. Carter said that by October 1, 2016, DOD will “create and distribute a commanders’ training handbook, medical protocol and guidance for changing a service member’s gender in the Defense Eligibility Enrollment System (DEERS),” and that the services “will be required to provide medically necessary care and treatment to transgender service members.”

At a briefing, Carter said, “The transgender individual, like all other service members, will get all medical care their doctors deem necessary.”

None of this is a controversy for the major media, which finance the NLGJA and do not dare question this radical sexual agenda. As reported extensively by Accuracy in Media, the NLGJA holds conferences and fundraisers on a regular basis that are sponsored by all of the major news organizations.

A benefit for the NLGJA in New York featured what the group itself called “some of the biggest names in media.” They included:

A more recent benefit event for the NLGJA in Los Angeles was sponsored by Comcast/NBC Universal and CBS News.

If members of Congress challenge this “transformation” of the military and assert their legislative powers, they would be going up against two of the most powerful interest groups in the country—the gay lobby and the major media.

So they take the easy way out by asking a few questions and meekly requesting hearings.

It’s difficult to know which is declining at a more rapid rate — the morality of the country or the relevance of the U.S. Constitution. Perhaps they are both hitting rock bottom at the same time.