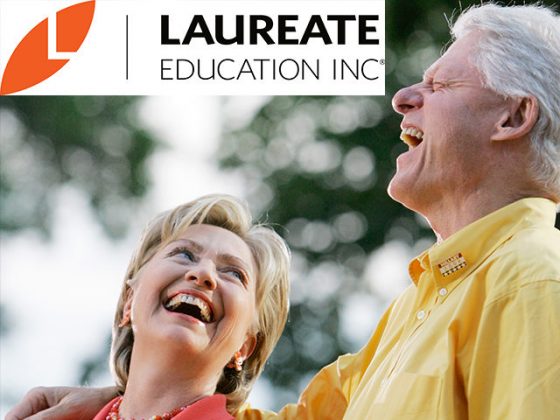 Is the race for the White House really coming down to which presidential candidate was tied to the less scandal-plagued for-profit school? Not if the media have anything to say about it. They only want you to know about one of them.

We have seen an endless run of articles and TV segments focusing on Trump University. How does it look? Well, a former sales director there said that “…Trump University was only interested in selling every person the most expensive seminars they possibly could.”

Trump claims that “98% of those people liked the school,” and gave it great report cards, according to CNN. There are currently three lawsuits focusing on Trump University, including one by the New York State Attorney General. Trump has pointed to U.S. District Judge Gonzalo Curiel’s Mexican heritage as a likely factor in the treatment he has received from the class action lawsuits—treatment which he calls unfair. You can read plenty on that issue elsewhere and decide for yourself.

While many Republicans who have reluctantly endorsed Trump view his comments about Judge Curiel as a costly, unforced error that makes it harder for them to publicly defend him, one fact that could play to his advantage is that the law firm behind one of the class action lawsuits has paid the Clintons $675,000 in speaking fees since 2009, which is more than they’ve collected from any other law firm. Politics obviously plays a big part in this saga.

And that’s just the beginning. The real story deals with Laureate Education, whose connection to the Clintons was revealed in Peter Schweizer’s book Clinton Cash. More than $16 million was paid to Bill Clinton through a shell corporation, after which more than $55 million American taxpayer dollars flowed out of Hillary Clinton’s State Department to a non-profit run by Laureate CEO Douglas Becker.

Thanks to Judicial Watch, and an outstanding article by WorldNetDaily’s Jerome Corsi, the story is out there. And Corsi has no problem citing unpalatable facts, such as

So Laureate Education and the Clintons lined their pockets with cash from students incurring massive personal debts. This sounds an awful lot like the allegations against Trump University.

Mr. Clinton’s shell corporation scheme allowed him “to avoid disclosing the existence of the shell company even to the IRS, as long as compensation payments to him were withdrawn as soon as they were deposited, ensuring the account always showed a zero balance,” writes Corsi.

Bill Clinton resigned from his position as “honorary chancellor” of Laureate in April of 2015, right after the disclosure of the information from Clinton Cash was made public.

So where are the media? Why is one story worthy of so much coverage, but the other, virtually none outside of some conservative media? Could it be that the media are determined to destroy the Trump campaign, and don’t want to make things any tougher than they already are for Hillary?

After all, Mrs. Clinton still has dozens of FBI agents investigating criminal activity on her part in how she handled classified materials while serving, and after serving, as secretary of state. These agents are also investigating any public corruption she might have participated in, such as the Laureate Education scam with connections between Douglas Becker, Bill Clinton, and the State Department. She is also still being dogged by Senator Bernie Sanders (I-VT), who vows to take the fight all the way to the Democratic convention in Philadelphia next month. But the media have bestowed the title of “presumptive nominee,” and announced that Mrs. Clinton has clinched the nomination as of one night before the California and New Jersey primaries.

Here is a challenge for the media: take a look at this article by Corsi, based on the Judicial Watch Freedom of Information documents, and go through the story. Then report on it, or else explain why the Laureate Education story doesn’t deserve the attention that the Trump University story has garnered.

Conservatives often cite Jake Tapper of CNN as one of the only mainstream reporters willing to ask the tough questions of Democrats and the left. However, during his interview with Trump on The Lead with Jake Tapper on June 3, Tapper followed up 23 times, basically trying to label Trump a racist over his comments about Judge Curiel.

Although he appeared to sheepishly hint at the Clintons’ involvement with Laureate Education in an interview with Hillary that aired on the same show, Tapper failed to even make clear what he was talking about. However, during his session with Mrs. Clinton, Tapper offered no specific accusation for her to defend herself against, provided no follow-up—zero—and worded the question in the most softball of terms:

TAPPER: When you were launching your criticism, your attack against Trump University, which is right now in the middle of a civil suit for fraud, the Trump campaign started hitting back by questioning donations to the Clinton Foundation and how the money is spent. There have been questions in the media about that, and I’m not equating Trump University with the Clinton Foundation.

But do you think those questions undermine at all your argument against the Trump University?

CLINTON: Not at all. I mean, really, this is like an absurd comparison. We have disclosed everything. You can see what we do…

There are lawsuits in both cases. Lawsuits mean plaintiffs. Can’t Jake Tapper, or George Stephanopoulos—who failed to bring up Laureate in his June 5 interview with Mrs. Clinton on ABC’s This Week—find any of the plaintiffs in that case to interview?

Neither Trump nor Hillary wants to be talking about their respective ties to these for-profit education institutes. But so far only one party is being asked the hard questions—or any questions at all on this subject. How about some questions from the press for Hillary? It would, after all, be her first actual press conference in over 180 days, were she to grant one. Just to be fair and balanced.