“I, Michael Mullen, do solemnly swear (or affirm) that I will support and defend the Constitution of the United States against all enemies, foreign and domestic; that I will bear true faith and allegiance to the same; that I take this obligation freely, without any mental reservation or purpose of evasion; and that I will well and faithfully discharge the duties of the office on which I am about to enter. So help me God.”

Do you recognize those words? Do you remember the day you raised your right hand and quoted them? Does the pride you felt that day still burn in your heart, or is it a thing of the past? Were you making a commitment, or just taking a job? Is your commitment to the Constitution or the man in the Oval Office? Back then there were no stars on your shoulder, just a single silver bar. Nor was there any gold braid on your cap. Has age and rank diminished the commitment you made so long ago? Has time behind a desk changed your definition of service, or your allegiance to the people? I too took an oath when I joined the military fifty-two years ago. Like you, I have aged. I walk a little slower these days and my eye-sight and hearing are not what they once were. Yet, I remember that day, and take pride in the oath I took, the service I performed and the Constitution I swore to defend. I feel no less need to defend it today than I did then.

Our nation is facing the greatest challenge to its independence and freedom since our founding fathers penned the Declaration of Independence. Iraq, Afghanistan, North Korea and Iran do not pose the greatest threats to “the land of the free and home of the brave.” The man sitting in the Oval Office poses a much greater danger to this nation than any enemy assembling on foreign shores. To support his socialist agenda he has bypassed Congress and surrounded himself with avowed communist and socialist czars. Together they, along with their minions in Congress, have trashed our Constitution, the Constitution you took an oath to protect. You swore to “defend the Constitution of the United States against all enemies, foreign and domestic.”

Illegal aliens have flooded across our borders with the blessings of the man in the Oval Office who would give them citizenship to obtain their vote. They have overloaded our schools, our medical facilities and our social system. They are responsible for a far greater percentage of crime than their numbers would warrant. They have placed an unsustainable cost on our states and forced some state governments to the point of bankruptcy. In the process, Obama has turned his back on our friends and appeased our enemies. The graves of our young men in foreign lands attest to the valor of the American soldier and the value we place on freedom; ours as well as that of others. I deny there is any reason to apologize for America.

Foreign insurgents have invaded our nation and taken over parts of Arizona. They do this unhindered. When the Governor of that state sought to defend its citizens, she was blocked by the man sitting in the Oval Office. Instead of defending our nation, signs have been put up warning our citizens to avoid certain areas. Foreign nationals freely ply their drug trade in sanctuary areas on American soil. With the consent of the man in the Oval Office, they shoot and kill private citizens, as well as members of our border patrol, without fear of reprisal.

A Congressional majority has passed laws that are not only unconstitutional, but are bankrupting our nation. They have openly trashed our Constitution and laughed at those of us who would seek to defend it. They have passed laws detrimental to our national welfare and moved our nation toward socialism, totally disregarding the will of the people they claim to represent. They try to make a mockery of anyone who would remind them of the Constitution and its limitations on the powers of the federal government. States rights and citizen rights are being crushed under the tyrannical boot of the federal government.

Two hundred and thirty-four years ago our nation faced similar problems. King George III placed unbearable burdens on the colonists. Our founders, patriots all, refused to remain silent. George Washington commanded an army of 25,000 at its highest point. With that army he faced the strongest military power of his day. He led by example. When his army spent the winter at Valley Forge, he was there with them. The British generals spent their winter in the comfort of their headquarters. Washington understood his duty and with a rag-tag army of volunteers saved a nation. You command the greatest and best trained military power in the history of the world. Once again unbearable burdens are being placed on the people and our land is being invaded.

Today we stand in the shoes of our founding fathers. The winds blowing from Washington smell of evil, corruption and tyranny. We, like them, are faced with a government seeking to take away our cherished freedoms and God-giv­en rights. We, like them, have no representation in the halls of government. The hallowed halls of congress, once walked by statesmen dedicated to serv­ing the interests of the people, are now occupied by power hungry politicians who only hear the voices of the special interests who purchased them. No longer listening to the will of the people, they walk in lockstep with congres­sional leaders to do the bidding of Obama, their great proponent of socialism.

Obama has stated that if he loses control of congress, he will govern by Presidential Directive. A one man government is better defined as a dictatorship and tyranny.

Today, America is facing the greatest threat to our national existence since our founding fathers “ordained and established” this land of freedom. “We the People” have one question.

From the Communist’s Party of Australia’s Guardian:

Saturday October 30th was the 90th anniversary of the founding of the Communist movement in Australia. The event was celebrated with exhibitions, films, toasts and meetings around the country. 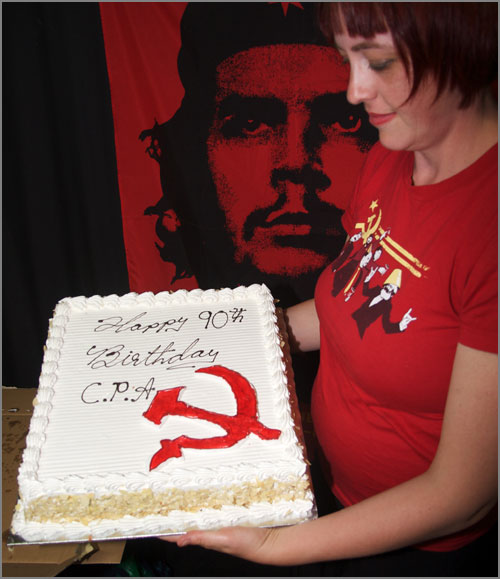 “The focus for the anniversary celebrations is to look back with pride and to look forward to campaigning for a socialist future for Australia,” Dr. Hannah Middleton, CPA General Secretary, said.

“We Communists are proud of our history and want to put it on display.

“At the same time, the Communist Party of Australia is a living and effective part of the campaigns against privatization, against the war in Afghanistan, for the rights of Aborigines, women, migrants and refugees, for a nationalized health system and for sustainable development and environmental protection and much more,” she said.

It is a good idea to understand how the opposition thinks.

Over all, they’re not happy.

The far left Washington DC based Institute for Policy Studies is the “ideas factory” behind the communist/socialist aligned Congressional Progressive Caucus and the wider Obama Administration.

If you want to know what the Democrats will do tomorrow, read what I.P.S. is advocating today.

For example I.P.S. staffer Chuck Collins recommended that Obama appoint communist Van Jones as a “Green Jobs Czar,” even before the 2008 election.

To Dolan, this means that Obama and the remaining Democrats now have nothing to lose by pushing hard to the left.

Dolan also openly advocates that Obama should “do the right thing through as many Executive Orders as we can present to him.”

In other words, Obama should simply use dictatorial powers to force I.P.S’s Marxist agenda down America’s throat.

Did we all miss the news flash? PROGRESSIVES WON! Two significant exceptions are of course the tragic defeat of Sen. Russ Feingold (D-WI) and the sad loss of principled Rep. Alan Grayson (D-FL). But, the Congressional Progressive Caucus, the largest caucus in the House Democratic Caucus at over 80 members, emerged virtually unscathed, losing only three members.

By constrast, the conservative Blue Dog Democratic caucus was more than sliced in half from 54 members to only 26. Further, of the 34 conservative Dems who voted against Obama’s Healthcare Reform, a mere 12 won re-election.

Dead weight gone. Good Riddance. The blame for the stalemate to come can now fall squarely where it belongs… on the anti-progressive, anti-democratic, anti-populist Republican members of Congress.

Our work is now finally beginning. The veil of a happy Democratic governing majority is finally lifted. We didn’t have it then; we don’t have it now. But what we do have now is a more solidly progressive bunch of Dems in Congress and a president presumably less encumbered by the false illusion that playing nice will get him a date with the other team.

Let’s thank Grayson, as well as Reps. John Hall (D-NY) and Phil Hare (D-IL), for their principled time in office. Let’s get Feingold on the ticket as Obama’s running mate in 2012. Let’s throw our support unabashedly behind the Congressional Progressive Caucus and let’s push Obama to finally do the right thing through as many Executive Orders as we can present to him.

People… Progressives WON!!! Republicans are all over the map. They’re a mess and won’t be able to wreak the havoc they seek. We should be energized. We must be energized. Too much is at stake. The road ahead isn’t so bad as long as we have the big picture and the fighting spirit spurring us on. Progressives will be the heroes in 2012. Let’s make Obama one too.

Russ Feingold may or not be on the 2012 ticket with Barack Obama, but I will bet you dollars to donuts that I.P.S. and their socialist and communist allies will be working overtime to make all of Karen Dolan’s predictions come to pass.

Hard Leftist AFL-CIO President Richard Trumka explains the impact of the US labor movement in the mid-term elections.

Trumka claims to have saved several leading Democrats from the guillotine and to have earned the appreciation of President Barack Obama.