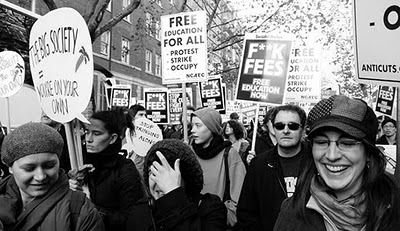 Students will mark Deputy Prime Minister Nick Clegg’s birthday this Friday by marching on his party’s HQ as a reminder that young people have not forgotten about his tuition fees betrayal.

A spokesman for the Education Activist Network said: “Students will march on the Liberal Democrat HQ to present Clegg with his birthday gift. After the police repression of last term’s demonstrations – with protesters dragged from wheelchairs, detained en masse for hours in freezing weather and beaten over the head to the point of brain hemorrhage – it seems only pertinent for us to get him a new kettle.”

This year’s first wave of action will be followed by a national walkout from schools, colleges and universities by students on January 29 and three days later national demonstrations will be held in London and Manchester. A fresh round of occupations is also expected when universities announce their new tuition fees before the end of February.

A National Campaign Against Fees and Cuts spokesman said that students might have been on holiday but were “still pissed off” at the withdrawal of EMA (education maintenance allowance) and the rise in fees.

“They understand they’re still going to see thousands of working-class young people forced out of education. We have the organization, activists and political will to make the movement even bigger than last year.”

Where is the new Maggie Thatcher?