Now Kevin Rudd’s replacement, Julia Gillard, appears to discount the Chinese threat theory idea and has moved towards allowing greater Chinese/Australian military co-operation. This will include livefire exercises at sea and permission for Chinese warships to dock in Australian ports.

It is worth remembering that Julia Gillard is a member of the socialist Australian Fabian Society, and began her political career in the orbit of the Communist Party of Australia.

From the Sydney Morning Herald: 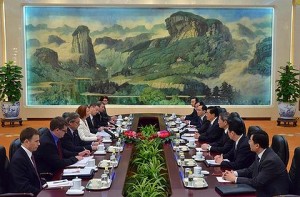 Julia Gillard, fourth from left, and Chinese President Hu Jintao, fourth from right, attend a meeting at the Great Hall of the People in Beijing.

Chinese warships could be heading to Australian ports this year after the Prime Minister, Julia Gillard, took “a few small steps” towards military transparency and co-operation with President Hu Jintao.

Her inaugural visit to Beijing as prime minister appears to have bookended two years of tensions which began with China’s taking umbrage with the 2009 Australian defence white paper, which it believed painted China as a military threat.

Western defence analysts are also concerned about the potential for a maritime accident triggering war, given China’s increasingly assertive conduct and the absence of the kind of maritime incident protocols that defused incidents between the US and the Soviet Union during the Cold War. Ms. Gillard said neither Mr. Hu nor the Premier, Wen Jiabao, raised any concerns about Australia’s military relationships with the US, or its allies, and nor did she raise concerns about the People’s Liberation Army.

“[We] indicated a preparedness to keep discussing defence co-operation,” Ms. Gillard told the Herald in an interview last night. “We have indicated we are open to ships visiting Australian ports [and] there’s some prospect that there will be some visiting before the end of the year.

“It’s a few small steps on a journey to better understanding each other’s military perspectives.

”Steps that enable us to better understand methods of organisation, protocols for working, are good things and obviously joint exercising assists with that.”

Will the Chinese Navy use such exercises and visits for espionage purposes?

Is Barack Obama, the only “security risk” currently leading a major Western country?

One thought on “Chinese Warships in Australian Ports?”