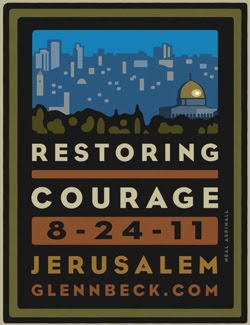 Big Dave from Dallas has arrived in Israel for the Glenn Beck “Restoring Courage” event. He’s on the ground, and for today and maybe longer, this post will stick to the top. If you’re not signed on to GBTV yet, here’s the link. $5 a month/ $50 a year.

My more recent posts can be found by scrolling down below this one.

Aug. 17 – 11:10 am – We roll into Nazareth, while our guide explains lunch to his wide eyed tourists…. and that big, grand, new, fabulous building right at the top of the hill? you guessed it. Government. The “northern regional council” I think it said. Very expensive, very new, sticks out like a sore thumb, reminds me of our stupid new city hall in Irving.

9:08 pm ET — Leaving Ben Gurion airport, Tel Aviv looked like many cities I’ve seen. Wide, not too tall (a decent downtown area), and situated on a desert backdrop that reminded me of nothing else but Las Vegas. The buildings are all white or off white, but other than that, the landscape is a match for the Nevada desert.

The bus headed east-north-east, crossing the body of Israel to the Sea of Galilee. I was limited to the bus-window view on this, my first day in the Holy Land after decades of wishing, and yet that bus window showed me a lot of things.

Turning east toward Galilee. More bus window video, you can hear our Arab Christian guide in the background…

I saw the incredible roughness of the coastal desert, the tough plants and dry infertile soil, and I could not imagine the courage of the people who were so determined to build and grow things here.

Then the climb began, and pines and deciduous trees appeared on hillsides as the altitude increased. In the area of Mt. Carmel, the peaks are over 500 metres above sea level and the trees are HUGE. And soon we saw gold domes and minarets, signaling the Arab Israeli areas as we neared the northern border of the West Bank.

And just like that, the highway paralleled a concrete fence with a barbed wire topper just to the right of the road, the actual border with the northern part of the West Bank. The parallel lasted for a mile or more.

We drove past Cana, the town where Christ worked His first miracle. He turned water into wine at the wedding feast there. And on a distant hilltop in the haze, we saw Nazareth.

The climb continued, a gradual one that had to have taken us a thousand feet above sea level, and suddenly the bus took us down a steep hill overlooking the sea of Galilee. It’s a beautiful body of water in the high desert, but it is LOW, seven hundred feet below sea level! Only seeing it will give the full sensation of it. On the winding road down, you pass a sign at roadside saying ‘niveau de la mare’, sea level, and the lake is still WAY on down the hill.

I noticed two things in Tiberias before I fell victim to two days of sleepless travel. First, gasoline is roughly seven NIS per litre, meaning about $8 a gallon.

Second, the stone foothills of the Golan Heights do something marvelous at sunset. When the town of Tiberias on the western shore is already in shadow, and the sun can only reach the hills on the eastern shore, it turns those stones a brilliant pink.

Pictures to come. Day one, done. Eight more to go. Or is it nine….?