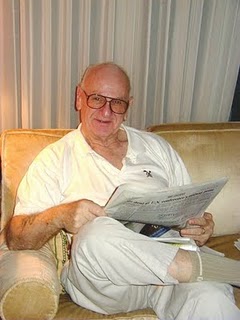 I called my folks this morning to wish dad a Happy Birthday. Mom answered; but she wasn’t feeling well and wasn’t sure she was up to taking dad out for dinner, much less making his cake.

Many years ago mom wasn’t feeling well on dad’s birthday. It was a hot August afternoon in Levittown, Long Island, New York. The air conditioning where my father worked wasn’t working and he was looking forward to getting home where he could relax, take a shower and enjoy what remained of his birthday.

The cake mom made split in two and she did her best to fill in the crack with extra chocolate icing before giving up and heading for bed since she wasn’t feeling well. She placed the cake in the middle of the dinning room table with a note, something to the effect, “Enjoy your birthday cake.”

Earlier in the day my brother and I had cleaned the fish tank. We’d left the fancy blue rocks on the bottom of the tub to dry, never considering someone might want to use the tub after we’d gone to bed.

The house was dark as everyone was already asleep when he got home. He glanced at the note on the dinning room table, the one telling him to enjoy his birthday cake, “What cake?” He only saw an empty plate, the one the dog left after having eaten the entire cake leaving only a trace of chocolate icing.

Dad reached into the freezer for some ice only to find grape Kool-Aid ice cubes which were half frozen, not exactly what he’d planned. In my mind I can see him taking a deep breath and letting it out, shaking his head and wondering what else could go wrong.

He opted for a shower, stepping into the tub without looking, his tender feet landed on the rocks from the fish tank. The expressions which escaped his lips were not recorded; but you can bet they were spot on. I’m told he carefully gathered up the rocks and placed them in the kitchen trash with a vow never to let us have another fish tank.

Did I mention dogs that eat lots of chocolate cake tend to get sick, from both ends? Dad cleaned up several locations throughout the house prior to venturing into the shower for his second attempt at leaving the day behind. He never noticed the small fish tank rocks embedded in the soap bar as he gouged the side of his face; why else would he have let out a death defying war hoop in the middle of the night?