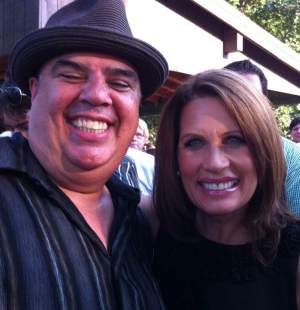 Labriola / Bachmann photo courtesy Andrea Shea King Jim Labriola from the “Home Improvement” TV sitcom has been a wonderful addition to our Tea Party Express V national bus tour team. Jimmy’s comedic family friendly monologues are a hit with the patriots at our rallies.
With most of Hollywood being hardcore liberals, conservative actor/comedian Jim Labriola is a breath of fresh air.

One of our two tour buses was under repair causing the twelve member administrative crew to pile on the entertainers bus for the two mile ride to the hotel. It was uncomfortable.

Jimmy spontaneously went into a hilarious monologue worthy of a Jim Labriola TV Special. My stomach contracted so much from laughter, I had a great ab workout. As corny as this might sound, we truly are a family on Tea Party Express. Jimmy masterfully used his gift of humor to bring us a little bit closer together.

Hey Jimmy, you should market an exercise video, “The Jim Labriola Ab Workout: Laugh Your Way to Great Abs”.

We just completed our Tea Party Express rally in Sioux City, IA. This morning I logged on my computer to read, “Obama: The Unemployed Are Being Discriminated Against”.

Obama and company never changes their play book to get-their-way. They always divide Americans into victimized groups saying they are either disenfranchised or discriminated against.

Last night, we arrived early enough in Omaha, NE for me to do laundry. The hotel washing machine was not working. The front desk sent a black tech to fix it. After solving the problem, he asked, “So, are you the driver of that bus?”

I explained my role on the Tea Party Express team. Obviously hostile, the big young black man subtly confronted me, “What are you people doing?” Clearly, he was a victim of the liberal media spin which says we are racist against a black president.

I shared with him what the tea party movement is REALLY about. The young black man was clueless about politics.

Listening intensely, he was like a sponge. Amazingly, he said, “I am beginning to see things differently”. Praise God! 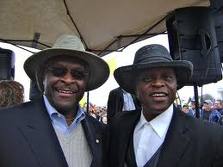 Patriots, I pray that someone will sponsor and help organize a tea party tour to black colleges and communities. Misinformed blacks need to see and hear black conservatives such as Herman Cain, myself and others.

View a video of Jimmy Labriola performing at our rally in Cheyenne, WY.

Co-Chairman of The Campaign to Defeat Barack Obama.

Please help me spread my message by joining my Liberty Network.

Lloyd is singer/songwriter of the American Tea Party Anthem and author of Confessions of a Black Conservative, foreword by Michele Malkin