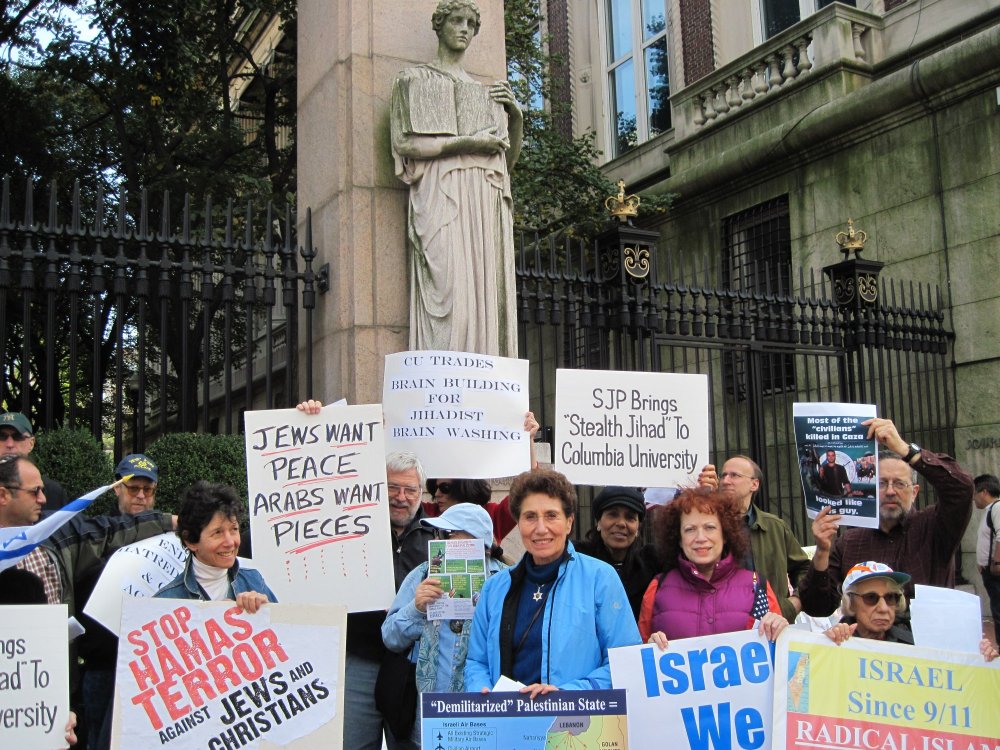 Tensions flared between dozens of pro-Israel demonstrators and members of “Students for Justice in Palestine” on Sunday afternoon, October 16th outside of Columbia University on the third and final day of the 2011 National Students for Justice in Palestine “teach-in” organized by members to prepare for their upcoming Israel Apartheid Week events across college campuses throughout North America.

Holding aloft both Israeli and American flags and signs saying, “SJP Brings Stealth Jihad to Columbia University,” “Stop Hamas Terror Against Jews and Christians” and “Occupy Columbia With Truth and Justice – Not Lies and Anti-Israel Incitement,” the pro-Israel supporters represented such organizations as Americans For a Safe Israel (AFSI), the National Conference of Jewish Affairs (NCJA), Amcha – Coalition for Jewish Concerns and the Human Rights Coalition Against Radical Islam (HRCARI).

Rancorous debates and raucous arguments broke out between the two sides as the Zionist contingent engaged the SJP members as they exited the university on the corner of 116th Street and Broadway. “Our conference is about advocating for human rights in Palestine. Our Palestinian brothers and sisters are being subjected to the most severe degree of oppression on a daily basis by the Israeli colonialists and occupiers and we are here to put forth our message that a Jewish state is a fundamentally racist concept as are the apartheid practices of that state,” said Amina Fayyid, a SJP student organizer.

According to the SJP web site, one of the objectives of the conference is to “facilitate and support the advancement of existing campaigns and the development of new campaigns with particular (but not exclusive) emphasis on Boycott, Divestment and Sanctions (BDS) of Israel.” Among the multifarious seminars and workshops taking place at the conference is one entitled, “Indigenous Struggles: situating Palestine as a settler-colonial project” which ostensibly explores “understanding Palestine within comparative settler colonial framework while seeking to re-align the Palestinian movement within a universal history of decolonization and imagining new possibilities for Palestinian resistance, solidarity and common struggle.”

Helen Freedman, executive director of Americans For A Safe Israel (AFSI), said, “Israel is the only stable democracy in the Middle East and these student activists know very well that Palestinians living in Israel have a much better lifestyle than they would in any other Arab country; yet their goal in organizing such a conference is to perpetuate the myths, incessant lies and blatant distortions that they use in their quest to demonize Israel. What we are witnessing here today is nothing short of the most egregious form of anti-Semitism cloaked in the clever subterfuge of anti-Zionism.”

Taking aim at Columbia University for allowing their campus to be used for the conference, Glenn Richter, former chairman of the Student Struggle for Soviet Jewry movement and the current director of Amcha -CJC said, “This university has a long and shameful tradition of anti-Semitic policies, dating back over 70 years ago when brave students protested against the pro-Nazi policies of the institution’s heavy-handed president, Nicholas Murray Butler. Butler then had a leader of the protests expelled. Today we are here protesting against a different form of racist ideology, commonly known as Islamo-fascism.”

Calling the members of SJP, “Islamo-Fascists For An Arab Only Palestine,” the Human Rights Coalition Against Radical Islam issued a flyer declaring that the motivation for the conference was predicated on “bigotry, violence and genocide against the Jewish people.” Dr. Marvin Belsky, a retired New York City physician and spokesman for HRCARI said, “In Israel, Christians, Muslims and gays have full human rights, protection and dignity. Arabic and Hebrew are the official languages and Arabs who comprise over 1.2 million citizens serve in government, as well as assuming positions as judges, doctors, ambassadors and police and Israel remains a refuge for the world’s oppressed from Asia to Africa.”

Larry Domnitch, a prolific author, academic and historian, said he came “to express my support for Israel in the face of so much misinformation that is being disseminated on this campus and others as well. In a few weeks will be the anniversary of the Balfour Declaration which expressed the inherent and historical right of the Jewish people to the Land of Israel. 94 years later that right is still being contested.”

Julian Rappaport, one of the demonstrators engaging with passers-by at the university’s gate, contended that the anti-Israel conference inside was not an expression of free speech, but “to give only one, incorrect side of the picture. Columbia has the responsibility to be more critical of what’s going on.” During a heated confrontation with an SJP member who called for “the complete obliteration of the racist Zionist entity,” Mr. Rappaport was arrested by police for allegedly kicking the student and was charged with disorderly conduct. He was released soon thereafter and returned to the demonstration.