As the unwashed masses are standing in their Nike’s, “occupying” the streets of New York to bring down Wall Street and re-elect Barack Obama, it is their guy, Obama, getting all the big time money from Wall Street banders, hedge funds and financial services. In fact, Obama raised more than the entire Republican field together. This included reaping the giant’s share of donors at Bain Capital, the private equity firm Mitt Romney co-founded. Despite Obama’s efforts to neuter Wall Street, he has continued to raise “far” more money in 2011 from those sectors than Romney, or any other GOP presidential campaign. One thing to remember: while Obama raised more from Wall than the entire Republican field in 2008, that flipped in the 2010 elections. 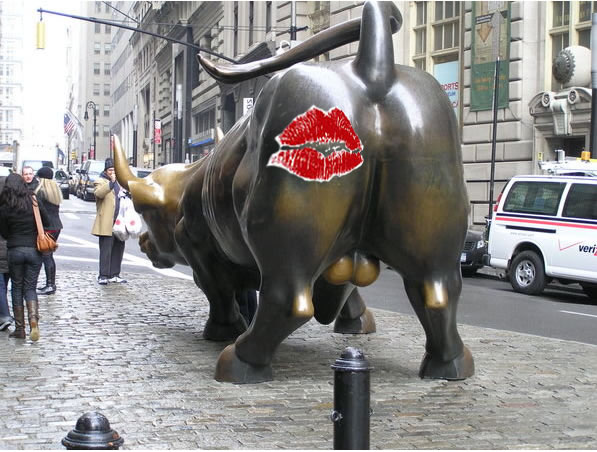 Obama has raised a total of $15.6 million from employees in the industry, according to the Post analysis. Nearly $12 million of that went to the DNC, the analysis shows.

Romney has raised less than half that much from the industry, while Texas. Rick Perry brought in about $2 million. No other Republican candidate has raised more than $402,000 from the finance sector, which also includes insurance and real estate interests…

Take the DNC money out of Obama’s bank account and it doesn’t look great for him. He has raised $3.9 Million from the ‘Wall Street’ sector, but Romney has raised $7.5 Million. Some bankers don’t feel so warm and fuzzy about their guy, Obama, as they did in 2008.

Another look from Politico:

Obama and other Democrats are still cashing in on Wall Street. Last month, Obama’s campaign held a fundraising dinner hosted by Warren Buffett at Manhattan’s Four Seasons restaurant, the Los Angeles Times reported. Obama has hauled in $3.9 million from the finance, insurance and real estate sector so far this year, according to the Center for Responsive Politics. But he’s been outpaced by GOP presidential candidate Mitt Romney, who has received $7.5 million from the sector.

Overall, the commercial banking industry spent roughly the same amount in the 2008 election cycle to back congressional Republicans and Democrats, spending about $14.9 million and $14.2 million on the parties, respectively, according to the CRP. But that balance tipped heavily to the GOP’s favor in the 2010 cycle, and congressional Democrats are now trailing far behind Republicans so far in the 2012 cycle when it comes to Wall Street support.

Publicly, many Democrats insist that they’re not concerned about irking their Wall Street donors.

Congressman Steve Israel, a Jewish member of Congress and head of the DNCC, supported Occupy Wall Street with an email to supporters asking for 100,000 signatures to support the protesters. It didn’t bother Israel in the slightest that the streets are full of anti-Semitism. That email brought a barrage of calls from bankers to the DNCC:

“They were livid,” said one Democratic lobbyist with banking clients.

The execs asked the lawmakers: “What are you doing? Do you even understand some of the things that they’ve called for?” said another lobbyist with financial services clients who is a former Democratic Senate aide.

Democrats’ friends on Wall Street have a message for them: you can’t have it both ways.

And some financial services lobbyists and industry insiders say the liberal line will make swing givers think twice before opening their checkbooks this year.

“Most Wall Street guys, they feel like they’re going to be burned in effigy,” said Anthony Scaramucci, managing partner of SkyBridge Capital, who gave to Obama in 2008 but is now fundraising for Mitt Romney. Some moderate donors, who have given to both parties, “fled from Obama in his support of the Wall Street protests,” he said…

Despite Dodd-Frank, a lawless Department of Justice and massive class warfare rhetoric, Wall Street “fat-cats” still loves them some Obama. A pox on them all. Weasel Zippers has more.