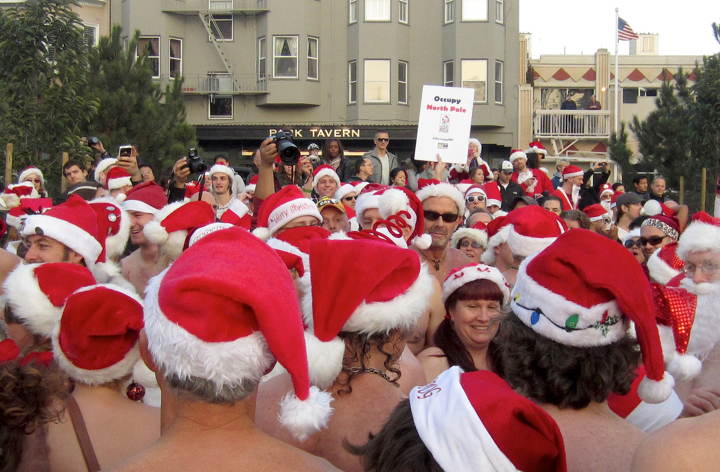 This gives a whole new meaning to Santa having skin in the game. Ewwww… 🙂

Forget naughty or nice… Santa is waaayyy flexible this year as you will see when you read and view Zombie’s latest foray into what I term as the Sodom and Gomorrah of the West Coast – San Francisco.

Fearlessly going where frankly no one else would want to go, Zombie posed as a Santa and went to three different events in the City by the Bay. First came Occupy San Francisco, which is basically a dead movement at least until next summer when there will be a hot ole’ time in the nation. The police have effectively cleaned out the Occupiers at least for now. Then came the Occupy Human Rights Day rally which was also lame. Not even enough loonies for a fake revolution. Then the main event – SantaCon. Replete with naked, Commie Santas, I kid you not. 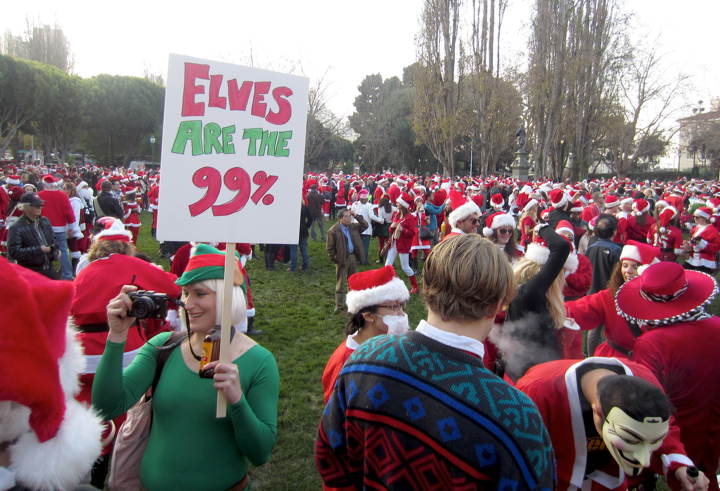 Yep, hundreds of Santas getting drunk, joining in debauchery and getting naked. Is there anything better I ask you? Shudder… I’m only showing you a couple of the pics here, but believe me it is a sight to un-see, not that I can EVER un-see those images. Makes one pray for blindness. My eyes!

As the perverts in Frisco get their ho, ho on, one wonders why that part of the country has not been smitten. All in good time I suppose.

Zombie did an incredible job on the photography and the write-up. You have to read and see it to believe it. I’ll just end off by saying that those particular packages should have stayed wrapped. Just sayin’.

By the way, their singing sucks:

I plan on watching White Christmas about thirty million times this weekend to forget this crap. Seriously.