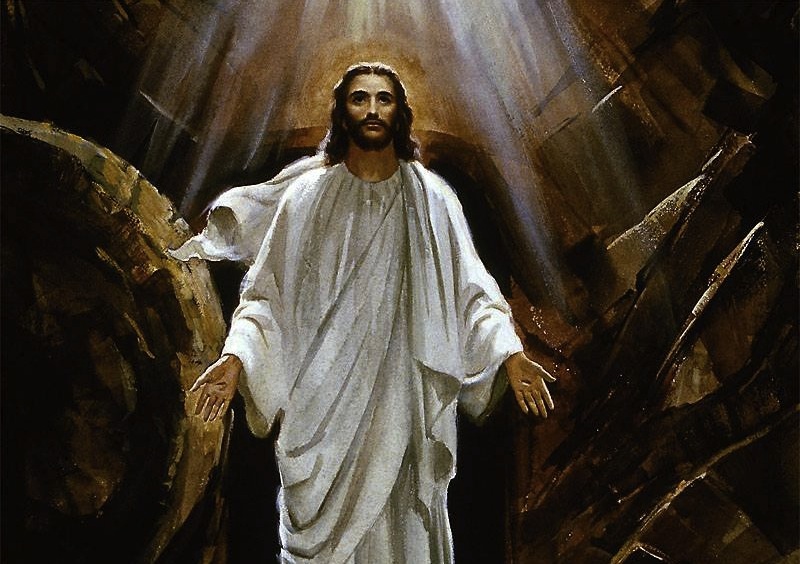 Today is Easter. It’s a day when movies like The Ten Commandments and Ben Hur will come out of hiding briefly in a cursory acknowledgment of the Christian foundations of our culture.

It’s a day when priests and ministers and vicars of all stripes will remind us of the importance of the story of Christ’s rising from the dead to walk among the living. It’s a day when children will wake up to find baskets of candy eggs and chocolate bunnies in strands of Easter grass that will be all but impossible to vacuum up later on. There will be Easter egg hunts. There will be sermons. There will be roast turkeys and hams and the occasional beef. There will be cookouts and family get-togethers with hamburgers and hot dogs and barbecued ribs. Prayers will be said for troops on foreign soil in lands specifically hostile to the holiday at hand.

An assortment of ethnic groups will weave their special ethnic message into the speeches and sermons. Groups of Pagans will, once again, make their point that the pagan holiday was there first, and that it was co-opted by Christians. And groups of Atheists will, once again, ridicule all the religious losers with their “imaginary friends” and congratulate themselves on how smart they are and how unfettered their thinking is.

Retailers will have Easter sales, politicians will be appropriately sober and politically correct and culturally diverse, and students will enjoy that great and important religious holiday, Spring Break.

However, even with all the efforts to paint over Easter with the facade that goes with every interest group’s interpretation of this opportunity to indulge, yet again, in self-important gravitas, there is a lesson within the story of Easter. It is a lesson nearly lost to us in our sophistication and conventional “wisdom” wherein we exalt the triumph of Man over Creation by marginalizing and deprecating the very idea that the universe could be a “creation” at all: we all “know” that it “just happened.” After all, what’s more rational than a huge explosion happening billions of years ago out of the nothingness? Big Bang, right? Almost too obvious to explain.

Yeah. Now listen, children, there’s no such thing as magic, religion is a fraud, and the Universe was caused by a huge random explosion from absolutely nothing. We are so smart. Hey, just ask us, we’ll tell you how smart we are.

And still, in spite of our own self-acknowledged smartness, there remains a lesson in Easter that is largely unlearned.

The Bible begins with a description of Creation and with descriptions of the origins of Man. Now, it can be argued (and has been) that the Bible is really a collection of allegorical tales and metaphors, and really should be taken with a certain amount of salt. And, speaking of salt, it has been pointed out repeatedly that there are contemporary idioms used in the Bible’s stories that have been taken literally by modern man, such as Lot’s wife being “turned to a pillar of salt,” where scholars are quick to point out that the “pillar of salt” idiom was an expression which, in those days, meant “died of fright.” Well, okay, I can accept that, but what about this Easter lesson?

The first clues appear in Genesis, right around chapter 1:27 which says (in the KJV), “So God created man in his own image, in the image of God created he him; male and female created he them.” This assertion shows up as a repeating theme in other places, like Genesis 5:1, “This is the book of the generations of Adam. In the day that God created man, in the likeness of God made he him;” and so on, and this point is made at other places in the Bible as well.

Now Man, being smart and clever, concludes that God must have arms and legs and a beard. Well, if we’re made in His image, then doesn’t that imply that He looks like us? Uh, well, no. Not exactly. Ever had one of those irritating arguments with someone who’s doing his best to discredit the whole idea of God by pointing out that “you’ve never seen Him?” And then you respond that God isn’t a physical manifestation, and he laughs that you hold a belief in an “invisible friend.” Makes disparaging remarks about your sanity, or concedes that your “delusion” is at least mostly harmless. Hey, we all have to believe in something, right?

So, if God isn’t a physical manifestation, then what is He? And so the explanation ensues that God is a non-physical, immortal, eternal, omnipotent, and all-knowing being. Well, non-physical would sort of imply invisible, right? So the “invisible friend” appellation must be right, yes? More laughter, more ridicule, more condescension.

Looks like there are more ways to wipe out the Christians than feeding them to a bunch of hungry lions. Undermining their confidence in their own beliefs is a good start. Declaring any such belief to be a “delusion” is a good second move. Denigrating the whole of Christianity such that it becomes culturally unattractive and socially undesirable is a good strategic continuation.

Wow. Earth, in this sophisticated age, is a tough room. Laughter and catcalls for enlightenment at all turns, and declarations that indulgence is where the real enlightenment is.

Still there is a lesson in the Easter story. The book of Genesis has been around a long time. A very long time. And in it is the germ of a lesson that doesn’t really come forward as an open demonstration until the book of Matthew, and related chapters.

Christ was slain in public view, dead beyond all question, and yet three days hence rose and walked among the living. Well, sure, he could do that, because after all he was the Son of God. And God is an immortal, non-physical being who, incidentally, made Man in His image.

What does that even mean? How does an immortal, non-physical entity have an image? And how does He render Man in that image? Well . . . it could mean that Man is also an immortal and non-physical being. But wouldn’t that mean that men don’t die? I mean, if we’re going down that road, doesn’t that make sense?

Well, what if you had someone willing to demonstrate, convincingly, that death is basically an illusion and not a permanent state of affairs? What if you had someone who was clearly of divine origin who was willing to perform that demonstration, who would allow himself to be killed so that he could stand up again after having been entombed and walk among the living to show that death is not the end?

Of course there’s no guarantee that everyone would actually get the point, learn the lesson, and grasp the truth of the teaching that Man really is created in the image of God: that he really doesn’t die, and that while bodies are temporary, the soul is forever.

And, of course, there’s more implied by that, like what would it be like to have to drag the burden of your sins around for eternity, and what can be done to mitigate that burden. And the Bible might also have some lessons about that, too.

But let’s begin with the simplest — and the largest — of the lessons demonstrated in the Easter story: death is the illusion, the life of a man continues past the end of his body, and consequently the future matters, so your life today matters also.

Yes, He is risen. But in that moment is the lesson that this is not just for Him, but for us all.