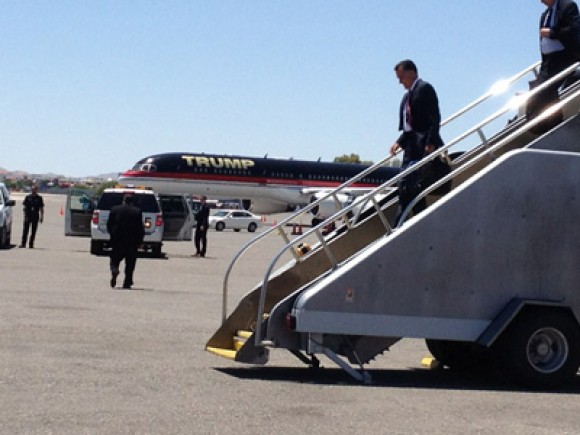 On a day that Barack Obama was giving the Presidential Medal of Freedom to a socialist, Dolores Huerta, who has praised Hugo Chavez; and just days after left-wing activist Al Sharpton was comparing Republicans to Hitler, the media were consumed with the horror of projected Republican nominee Mitt Romney sharing a stage with Donald Trump, who has raised questions about President Obama’s birth certificate and place of birth. The usual double standard is on open display.

On nearly every hour of programming on MSNBC and CNN the theme has been the same. How can Mitt Romney agree to hold a fundraiser with Donald Trump, who has continued making comments about Obama’s birth certificate?

Yet how many times have these same networks, particularly MSNBC, overlooked Obama’s past and current associations, with everyone from unrepentant terrorist Bill Ayers, to “comedian” Bill Maher, to the preacher of hate, Jeremiah Wright, to self-described communist Van Jones?

The point is, as far as the mainstream media are concerned, almost no one on the Left is controversial, no matter how crazy or radical they are. The media’s use of the “birther” issue is really a smokescreen to cover up a number of issues that have nothing to do with the authenticity of Obama’s birth certificate or the place where he was born.

Roger Kimball, the Editor and Publisher of The New Criterion and head of Encounter Books, has written an excellent piece for Pajamas Media titled “Who Is Barack Obama? The Question that Won’t Go Away,” in which he questions his radical ties from the past, his sealed records on everything from college transcripts to why he gave up his law license, to the current controversy that the mainstream media won’t touch: the biographical pamphlet circulated by his literary agent, which said that he was born in Kenya. It remained that way for 17 years, undergoing several revisions, including that he became a U.S. senator, but it never changed his place of birth as Kenya, until just before he decided to run for president. The explanations have been that it was a fact-checking error, or a typo, neither of which makes any sense. Are we to believe that they pulled that fact out of thin air, that someone was confused when writing it, that Obama never saw it and asked to correct it? And maybe it wasn’t true, but he wanted people to believe it was, having no intention at the time to run for president. Who knows?

And what about the latest Jeremiah Wright scandal? Edward Klein, former editor of The New York Times Magazine, revealed in his book, The Amateur, that Wright was offered $150,000 to remain quiet during the Obama presidential campaign in 2008. More specifically, he was offered the money in an email “if he would shut-up and not criticize Obama anymore,” Klein told Sean Hannity on his radio show.

He named the person who made the offer as Dr. Eric Whitaker, the vice president of the University of Chicago Medical Center and “member of Obama’s very tight inner circle.” Klein pointed out that “Whitaker’s hospital is the same one that paid first lady Michelle Obama $316,962 a year to handle community affairs for the University of Chicago Medical Center while her husband served in the U.S. Senate.”

Here are a couple of examples from the MSNBC shows on Tuesday:

On MSNBC, on the 11 a.m. ET hour, hosted by Thomas Roberts, was this exchange:

“Earlier on a show on MSNBC when one of your anchors said, ‘How can Mitt Romney stand next to a guy who could embarrass him at any moment? I’m thinking to myself Barack Obama can be embarrassed at any moment by a guy he made vice president…You can’t be held accountable for everything people who support you say.

One of the “most dignified and greatest political leaders?” As far as his being incredulous about comparing his gaffes to those of Trump’s, Joe Biden has of course been a gaffe machine, but worse than that, a plagiarist who was forced out of the 1988 presidential race for that transgression.

Martin Bashir said that Donald Trump’s comments were “racist rubbish…nonsensical, ludicrous nonsense.” Then he added, “We know that Mitt Romney is a spineless individual. But shouldn’t he really cancel this event. Would that be the right thing to do?

The issue here is a complete double standard, wherein Obama is given a pass on almost any of his associations, especially those on the far-left. And when legitimate questions are raised, they are dismissed under the umbrella of birtherism.

Roger Aronoff is the Editor of Accuracy in Media, and can be contacted at [email protected]

Once again, Obama defers to his colleagues at the Democratic Socialists of America.

In his latest “About-to-go-viral” video, filmmaker Ben Howe uses Andrew Breitbart’s inspiring words at CPAC 2012 as inspiration to fire up voters hoping for change in November. “There are two paths…”