Suddenly, Barack Obama wants to ban AK-47 “assault” weapons because they belong only on “the battlefield of war,” even though the LEGAL AK-47s in the U.S. are dressed-up 22-caliber semi-automatic rifles NOT used in war. New York’s Nanny Mayor Mike Bloomberg wants America’s police to go on strike until the federal government adopts stricter gun laws, although I would expect that if his own security police went on strike he’d become a little nervous. Lanny Davis, former special counsel to Bill Clinton, told Sean Hannity on the radio Tuesday that the federal government should be tracking the purchase of weapons and ammunition to identify “disturbing trends” … you know, like being prepared for the country to fall apart or Barack Obama to join the UN in trying to ban weapons.

Let’s look at some facts about gun deaths in this country, facts the left-wing gun-grabbing fascists among us don’t include in their narrative — because facts don’t fit what they hope to achieve.

Let’s start with James Holmes, who murdered 12 people and wounded 58 others during a shooting last Friday in Aurora, Colorado. James Holmes did not use an AK-47, Mr. President. He murdered and injured people using an AR-15 with a 100-round drum, a shotgun, and a semi-automatic pistol. The AR-15 Holmes used was legal; it was not an “assault” weapon because it was not fully automatic; it was a semi-automatic rifle. Obama would have Americans believe that any AK-47 or AR-15 stored at home in their gun cabinets is an illegal weapon; they’re not. The Clinton-era ban on “assault’ style weapons in this country sunset in 2004, but it is still illegal to own an AK-47 or AR-15 that has been modified to fully automatic fire. So any time Obama or anyone else on the left rants about “assault weapons” used on the “field of battle” roaming “the streets of this country” all by themselves, remember this: The semi-automatic weapons in this country are glorified .22s. You can fire off rounds from a semi-automatic “assault” style weapon just as quickly as you can a semi-automatic Glock handgun: BECAUSE YOU HAVE TO PULL THE TRIGGER EACH TIME YOU WANT THE WEAPON TO FIRE.

Here’s another fact the disingenuous left doesn’t want you to know about. Only about 1 percent, yes ONE PERCENT, of the gun deaths in this country can be attributed to the use of ALL TYPES of rifles and shotguns, let alone semi-automatic rifles, which the lapdog media and the fascist left will always refer to as “assault” weapons because the word gets stuck in your conscience. 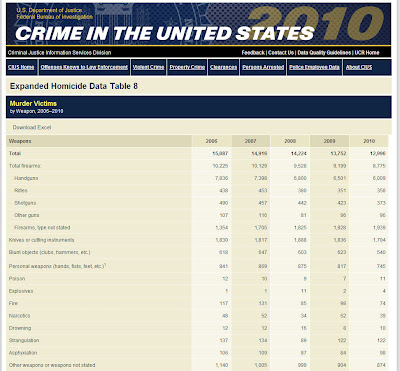 While we’re on the subject of the numbers of gun deaths in this country. There were 12,996 homicides in 2010 that occurred when someone used a firearm to do the killing; 831 of those deaths occurred from the bullets fired from rifles and shotguns. Furthermore, murderers use “assault” style weapons so infrequently to kill people, the FBI doesn’t even track them in a category separate from “rifles.” In comparison, 1,704 people were killed in 2010 with knives, and 745 people were killed when someone beat them to death.

I guess that means that the police should go on strike until the federal government bans all kitchen knives, hands, fists, and feet. Can somebody please tell Mayor Nanny Bloomberg that the Supreme Court ruled 7 years ago that the police aren’t even required to protect people?

Let’s get further into the left’s hypocrisy. In 1976, Washington, D.C., passed a total ban on guns within the limits of the District of Criminals, presumably to protect Curroptocrats from American gun owners fed-up with their raping of this country; 14 years later, murders in D.C. had skyrocketed. Naturally, after the gun ban was lifted in 2008, murder rates dropped 25 percent. 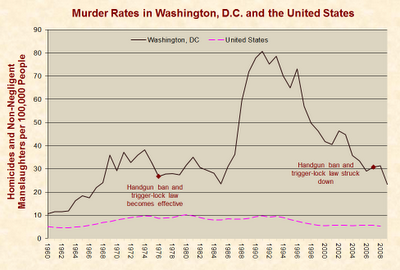 You won’t hear that in the left’s narrative. And I don’t even need to go into the left ignoring murder rates in Obama’s Chicago backyard, where some of the strictest gun controls in the nation violate the 2nd Amendment. All you need to do is watch the nightly news.

I also won’t go into the number of illegal guns used to commit most murders (estimates indicated about 80 percent); all you need to do is read anything about Fast and Furious and the death of Border Patrol Agent Brian Terry. Yes. The federal government did build that.

So let’s get to the heart of what really kills far more Americans every year than any nutcase wielding any type of gun. Numerous medical organizations estimate that medical mistakes kill nearly 300,000 people every year, though that figure may be closer to 500,000. Meanwhile, 32,310 people died on the highways last year (you know, the roads Obama built so your small business could become successful) in motorcycle and automobile accidents — almost 20,000 more people than those dying at the hands of a murderer firing a gun.

All of which means, I would be far safer if I never went to the doctor or drove to work. So, Mr. President, I’ll be keeping my AK-47 until you come for it. And Nanny Bloomberg? When you pry my weapon from cold dead hand, make sure you don’t spill the Big Gulp in my other hand.

One thought on “Let’s Ban Doctors, Cars, and Knives before We Ban AK-47s”