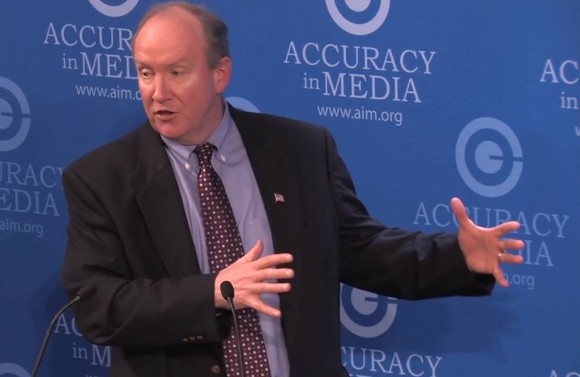 “What we’re seeing in this administration,” said McCarthy, “is not only an out-of-whack choice about what their priorities ought to be, but the actual use of political philosophy in deciding who gets prosecuted, and how cases get conducted—and that, for somebody who’s been inside the Justice Department, is an unbelievable thing…If you have a situation where the Justice Department is using politics in the actual enforcement of the law, then you don’t have the rule of law anymore, and you don’t have equal protection under the law anymore.”

In a later talk at the conference, McCarthy discussed his new book, Spring Fever: The Illusion of Islamic Democracy, which we will post in the near future. He also gave an interview at the conference, where he said that what’s happening in the Middle East “is not the spontaneous outbreak of democracy,” but rather the ascendancy of Islamic supremacism. McCarthy also observed that the only countries that practice slavery today are Islamic countries. He said that America and Islam are two different civilizations and that while we’re a freedom culture, in Islam “liberty is subordinated to ‘order’…sharia law.”

You can watch his interview here: