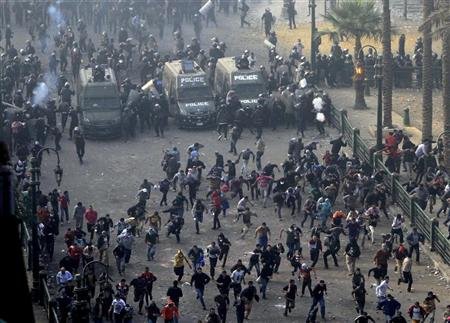 Egypt’s Muslim Brotherhood leader, Morsi, last week played the propagandized diplomat abroad for the masses. He claimed he was the one who created the ceasefire between Israel and Hamas with Hillary Clinton whimpering at his feet. All the while gaining political power and gravitas, which he did not waste upon returning to Egypt. Morsi basically declared himself Pharaoh last week:

But the ink had barely dried on the international paeans before Egypt’s first democratically elected Islamist president made a domestic move replete with ideology.

In a presidential decree announced on state television Thursday afternoon, Morsi stipulated that any challenges to his decrees, laws and decisions were banned.

“The president can issue any decision or measure to protect the revolution,” said the decree, which further stipulated that, “The constitutional declarations, decisions and laws issued by the president are final and not subject to appeal.”

The decree also stated that no court could dissolve the country’s Constituent Assembly, which is drawing up a new Egyptian constitution.

The rewriting of the new constitution has been a controversial issue, with most non-Islamist members quitting the Constituent Assembly – including representatives of the Coptic Christian Church and the April 6 Youth Movement, which played an influential role in the 2011 ouster of former President Hosni Mubarak.

Morsi declares himself “Pharaoh” – because, hey, the Arab Spring was all about democracy… or something. Democracy has pharaohs, right? And make no mistake, Barack Obama and his minions are in lock step with the Islamic Pharaoh.

Morsi says he is only claiming his new found powers until their new constitution is ratified. Right. Obama, on the other hand, here in the US will be able to now ‘stack’ the Supreme Court which will give him full power over the judicial branch. He already controls the executive and legislative branches. Say it with me – DICTATOR.

While Morsi pretends to call for peace, the Muslim Brotherhood in Egypt is calling for Israel’s extermination. Morsi is using diplomatic speak while planning the death of the Little Satan and the rise of the caliphate. The Brotherhood this morning started calling for protests in support of Morsi’s power grab, while judges in the country are calling for strikes against Morsi’s massive power decree. Thousands are protesting in the streets on both sides of the ideological chasm. The Brotherhood wants the death of anyone standing against Morsi. While Obama, Clinton and a host of others continue to snuggle under the sheets with the Muslim Brotherhood, Morsi has become a true despot and is silencing Egyptians in the name of national security. Something to which Obama also subscribes.

While all these power struggles play out in dramatic color in the news, off camera Iran is busily rearming Hamas. The Sunday Times cites an Israeli official who claims Tehran is shipping Fajr-5 rockets through Sudan to the Gaza Strip. There is no real ceasefire. There is a lull for regrouping and then escalated violence and everyone knows it. There is speculation that Iran could be moving longer-range ballistic missiles into Sudan, which could be aimed at Israel from the African country. All of this is in preparation to attack Israel before or after they attack Iran’s nuclear facilities. Islamic terrorists also destroyed part of an Egyptian security building at Rafiah Saturday night, sticking their thumb in the eye of Morsi as a challenge to Egypt’s control in the Sinai. The Jihadists don’t like the ceasefire – they want to get their Jewish genocide going and fast. And when I say Jihadists, I’m including Morsi and the Brotherhood. Russia doesn’t buy the truce either and they have sent ships to Gaza just in case. They are the true puppet masters in all this. Egging on Iran and Hamas, while surreptitiously waiting in the shadows to clean up the spoils of war and claim world power. Who needs Pinky and the Brain? 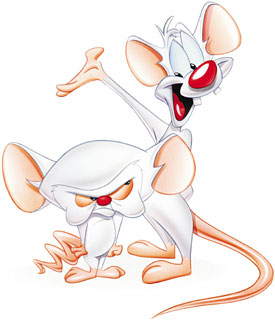 Pinky: “Gee, Brain, what do you want to do tonight?”
The Brain: “The same thing we do every night, Pinky—try to take over the world!”

Iran was very quick to congratulate Hamas on their victory over Israel – sort of like telling themselves, ‘well done.’ Iran is also whining to the UN (which is controlled by Islamic despots) that the US Navy is guilty of illegal and provocative violations of their airspace etc. All for show.

Morsi’s ascension to dictatorial status caused their stock market to plunge 10%. With a false front stock market here in the US, what do you think will happen as Obama makes his power grabs? The market is built on a sink hole and will vanish in a flash. It will make a depression look like a walk in the park.

The US is now entwined with Egypt. You simply can’t be ‘with’ Egypt and ‘for’ Israel. These are incompatible stances. While America played and slept, the Progressives and the Muslim Brotherhood seized control of our government. Most Americans just don’t seem to realize this yet, but that’s where we are. And just as Morsi is telling his people that his power decree is for their own good, Obama is telling America his executive orders and decrees are for our own good. It’s to keep us safe, don’t ya know.

The whole dust up between Israel and Hamas and then a ceasefire has the feel of a setup. Something cooked up between Morsi, Obama and others. As Sultan Knish so aptly puts it:

Good luck finding out if Morsi and Obama traded tyranny in Egypt for a ceasefire in Gaza. We’ll get the answer to that right after we get the situation room report from Benghazigate.

So, while our president is now the ‘BFF’ of the Muslim Brotherhood and Morsi, the implementation of the worldwide caliphate continues right on schedule. Next on the docket, the eradication of Israel. Look at the events of the last few months including Benghazigate. All of it ends in the same result – Islam and global power and control. In an Islamic turn of the worm, the whole Gaza conundrum buys Obama time to let Benghazi die out as a topic.

As the fall of America continues its obvious track under Obama and the Marxists, the Islamic Pharaoh rises. Will a complacent America allow her ‘democratically elected’ tyrant to disarm us and force our submission to the caliphate? Ask yourself, what side will America stand on in the coming world war? We have turned our back on Israel and God. Now we stand in the dark with a nuclear bomb for a night light.

22 thoughts on “The Islamic Pharaoh Rises”