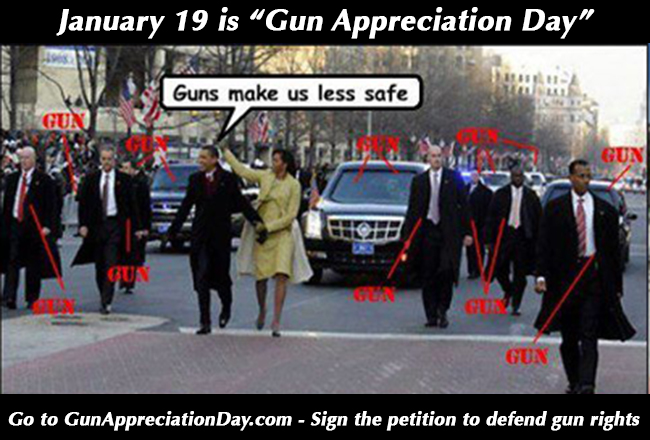 Go to GunAppreciationDay.com and sign the petition
to defend gun rights

Then invite your friends to join!

President Barack Obama and his sycophants aren’t pulling any punches while they attack our Second Amendment rights.

It’s about time we started fighting back and playing for keeps.

Liberals have cowed down too many of our supposedly conservative leaders. Instead of standing strong for our right to bear arms, they’re giving into the emotional whirlwind of the leftist PR storm for gun control.

It’s abundantly clear by now that it’s up to We the People to stand up and make our elected officials do their duty, and protect the Constitution.

That’s why we’ve brought together a broad coalition of grassroots conservative groups who are ready and willing to take on the Obama Machine, go toe-to-toe with establishment “moderates,” and repudiate the lies and misinformation spread by the liberal media.

1- Go to GunAppreciationDay.com and sign the petition to defend gun rights

4- Then invite your friends to join!

We at Political Media, along with coalition members the Second Amendment Foundation, Committee for the Right to Keep and Bear Arms, Special Operations Speaks, Revolution SuperPAC, Citizens and Country, Social Security Institute, Committee to Draft Judge Andrew Napolitano, Conservative Action Alerts, Women Warriors PAC, and Conservative Action Fund are joining together to make a clear statement against the gun grabbing schemes of the left. 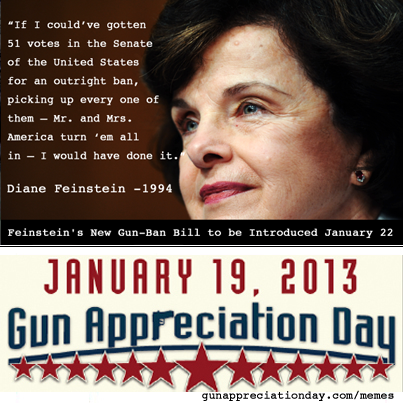 We need every patriotic American to turn out en masse at gun stores, gun ranges, and gun shows from coast to coast.

The Obama Administration has shown that it is more than willing to trample the Constitution to impose its dictates upon the American people. If the American people don’t fight back now, Obama will gut our Second Amendment rights – just as he deviously gutted the First with Obamacare.

Make sure that the crooks in this Administration know that we won’t take this laying down. If you are at all able, block off some time on the 19th and take part in Gun Appreciate Day. Invite your family, friends, and neighbors, too – anyone who believes in our Founder’s views on the Second Amendment needs to be there. I hope you’ll join the movement as people form lines “around the block” at gun stores, gun counters, gun shows, and gun ranges to protest the Obama administration’s assault on gun rights.

We have never had a president who so callously disregards the Constitution, Congress, the courts, and the will of the American people.

And that’s why this outpouring of public support is so important for our constitutional safeguards to keep and bear arms. If, as this president claims, the American people are at risk from murderous rampagers, the logical solution is to extend our rights to protect ourselves with guns, not present a docile target.

Will you commit to standing up for the founding principles of our nation?

Are you willing to take action for the sake of our God-given rights enshrined in the Constitution?

Now more than ever, America needs dedicated patriots like you. For the sake of our Republic, please don’t leave the call unanswered.