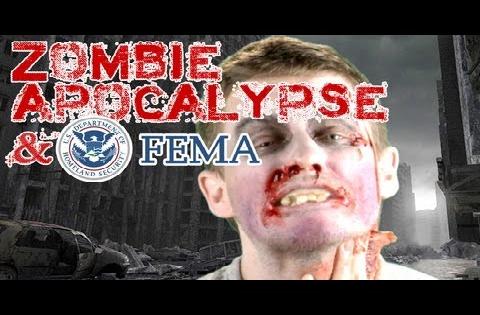 I just want to know if Idaho has lost her ever-freaking mind. I would laugh at this except I know it is not a joke and in reality what they are practicing for is societal collapse and civil unrest. Gee, I wonder whose bright idea this was? Surely it has the approval of Governor Otter who seems to have shifted to the dark side. He is signing Idaho up (along with the majority of Republicans in this state I might add) to accept Obama’s health care exchange and in return, Idaho gets millions. I am sure Otter’s 30 [million] pieces of silver seem a great boon to him; to the patriots of Idaho, it is more like treason. Once the state door is open to these Progressive vampires, they go all out. The latest invited in is evidently FEMA.

Yes folks, FEMA will hold a Zombie Apocalypse/Alien Invasion drill in Moscow, Idaho on April 27th, from 9 am to 5 pm with 100 goons and/or dupes participating. This is a full-scale exercise. Guess what? I may go see this for myself. Moscow is full of good people. I almost moved there. I know they don’t condone this farce of a pretense. I wonder why they picked Moscow? There’s a university there, but it is a small town. Boise would have been the logical choice, but I don’t think logic has anything to do with this.

There are 2 scenarios: mass casualty and a rope rescue. All Latah Co first responders and nearby counties will be participating. CERT will be assisting in the EOC and other duties as deemed necessary.

Mass casualties? From what? A blizzard? Flooding? Neither of those are likely at all. More likely, mass casualties from civil unrest and the Obama administration clamping down hard on the area. I find this very disturbing. Maybe there’s a “logic” to it after all: Moscow is a small town, off the beaten path, with a pool of willing, uh, “participants” to recruit for such an exercise. Doing this in a larger venue might attract press, remote small-town Idaho, not so much.

Hey, any excuse to practice shooting at unarmed citizens, right? The government is using citizen target profiles to practice with as well, while buying up all the arms and ammo they can get their evil hands on. They are also stockpiling food and medicine. I’m sure this is all just a coincidence – not. If FEMA and the CDC were truly concerned in prepping for emergencies to ‘protect’ civilians, they would go about it seriously. Instead, they are practicing on how to take us down in case of an emergency, while trying to sell it as humorous. Look at the funny government! Don’t pay attention to what they are really practicing for. I seriously doubt it is Zombies or Aliens. The government thugs and our local leaders make it seem sooo silly, that no one will take it seriously (at least they hope that is the case). They want everyone to view it as entertainment, like a movie and not real. Do they really think we are that stupid? Why, yes they do. It’s like reality TV, without the reality or the TV.

While the nut cases and the conspiracy theorists will thrill to this, you should be thinking in real terms. For instance, if the economy tanks, which is VERY likely, the government knows there will be riots and violence. They are preparing for how to quell these events. Which is why the choice of Moscow, Idaho has me confused. The Coeur d’Alene/Post Falls/Hayden area is close and much bigger in population. So, I will have to keep noodling on their choice of cities. Perhaps it is a county/regional thing. In which case, those in Moscow need to be asking some hard questions of their leaders.

The person organizing this at FEMA is Sandy Rollins. Here is her contact info at Citizen Corps (that creeps me out all by itself – or as Obama would say: ‘Citizen Corpse’):

Nothing makes much sense anymore. We cuddle with the Muslim Brotherhood and support terrorists and tyrants. The US is broke and we are gutting our military, but we can send fighter jets to Egypt. We are supposedly protecting the homeland, but we release over 2000 illegal immigrants, many with violent records with a promise that they will check in. We leave our borders wide open. We are redistributing our wealth to nations all over the planet, while running FEMA drills across the country for reasons that just don’t make sense. Unless of course you include civil unrest and martial law in the equation. And possibly war. All this while our leaders are trying to disarm us and nullify the Second Amendment and the Constitution itself. Do the revolutionary math.

Believe it or not, most people aren’t bothered by all this. They just think it is the government running drills and is normal. It is not normal folks. Not at all. And the costs have to run into the many millions if not billions. How can we afford this, especially since it is unnecessary?

There are military drills being run all over the country now. Tammy Bruce reports there have been drills in LA. I’ve seen reports on Houston, Miami, Chicago, Atlanta, New York, Philadelphia, Las Vegas, Phoenix and the list goes on and on. These drills included helicopters and repelling military into the heart of cities. All I can say, is trust your gut. This will not end well.

The government is prepping Idaho — maybe reminding us we’re not out of reach? — as part of its overall plan for the US and her citizens. Believe me when I say that it has nothing to do with Zombies or Aliens (well, maybe illegal aliens). Something wicked this way comes, folks. And it’s not cute. And it’s not theater. It will be very real. Life-and-death real.

Note: The web page has now been taken down from the FEMA web site, citing that this post (on a Sunday) caused so much negative response, it had to be removed. I’m just a blogger on a backwater blog asking questions about stuff that doesn’t seem right. You never know what question is going to start a storm.