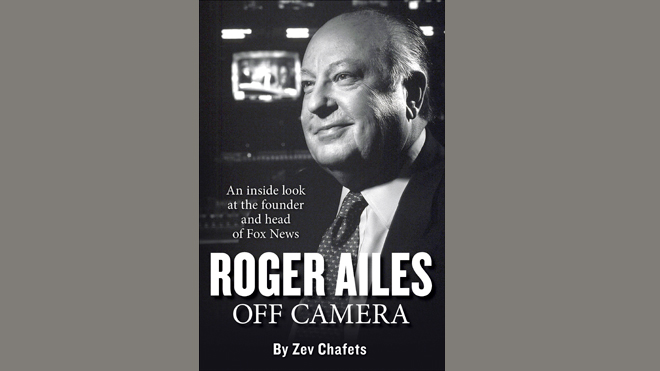 Available at Penquin.com and Amazon.com

I have always respected and admired Roger Ailes. He is a legendary businessman and a scrapper. He is also a diplomat, an intellectual and is not afraid to tell it like it is. He is loved and hated on both sides of the aisle – a recommendation all by itself. He has built Fox News into a worldwide media powerhouse because he has given the people more of what they wanted. Conservatism, non-bias and truth.

The Left and especially Progressives hate him… seeing Ailes as the boogeyman under their beds when in reality he is looking at them in the mirror. Chafets wrote a semi-biographical book on Rush Limbaugh that I read when it came out and it was fabulous. Well, he did it again and I thoroughly enjoyed it. How can you not adore someone who quotes the truth?:

“I like Joe Biden, but he’s as dumb as an ashtray.”

“The problem with Obama is he lazy. He’s never earned a dime in his life.”

And I love this from National Review on Ailes and Van Jones:

Of the administration’s former green-jobs czar, Van Jones, who took umbrage at Ailes’s commentary about the president, he had this to say: “I don’t pay a lot of attention to Communist infiltrators. Van Jones has one job, to stir up racism whether he can find it or not.”

Ailes is a man comfortable with himself. Confident and free enough to say what he thinks and not regret it. He has a spine, something in short supply these days in America. He is a man to be admired and emulated. This book is not only entertaining, it is philosophical and has many lessons to teach on business, life and success.

“When you’ve got Roger Ailes on your side, you do not lose.” — Rush Limbaugh

Roger Ailes is the quintessential man behind the curtain. He more or less invented modern politi­cal consulting and helped Richard Nixon, Ronald Reagan, and George H. W. Bush win their races for the White House. Then he reinvented himself as a master of cable television, first as the head of CNBC and, since 1996, as the creator and leader of Fox News, the most influential news network in the country.

To liberals, Ailes is an evil genius who helped polarize the country by breaking the mainstream media’s long monopoly on what constitutes news. To conservatives, he’s a champion of free speech and fair reporting whose values and view of Amer­ica reflect their own. But no one doubts that Ailes has transformed journalism. Barack Obama once called him “the most powerful man in America”— and given that Fox News has changed the way millions understand the world, it may be true.

Yet for all that fame and infamy, very few people know the real person behind the headlines.

Journalist Zev Chafets received unprecedented access to Ailes and his family, friends, and Fox News colleagues. The result is a candid, compelling portrait of a fascinating man. We see Ailes in action at Fox News and hear him reflect on personal mat­ters he has never before discussed publicly. And we discover the heart of his sometimes surprising political beliefs: his profane piety and his unwav­ering belief in the values of his small-town Ohio boyhood.

Ailes loves to fight, but he is a happy warrior who has somehow managed to charm and befriend many of the people he has defeated in political campaigns and television wars. Barbara Walters, Rachel Maddow, Jesse Jackson, the Kennedy clan— all are unexpected Ailes fans.

Chafets also gives us an unprecedented look at the inner workings of Fox News and explores Ailes’s relationships with Bill O’Reilly, Sean Hannity, Megyn Kelly, Neil Cavuto, Chris Wallace, and the other stars he has nurtured.

Ultimately, Ailes is neither villain nor hero but a man full of contradictions and surprises. As Chafets writes, “What will he do next? What stokes his competitive fires and occasional rages? How to reconcile his acts of exceptional loyalty and pri­vate generosity (even to rivals) with his impulse to present himself to the world as a ruthless leg breaker? What makes Roger run—and where, if anywhere, is the finish line? As Ailes himself might say: I report, you decide.”

Conservatives could stand to learn a few things from Ailes and his monster success. I have always liked the guy and I love, love Chafets’ book! You will love Roger Ailes Off Camera too… You can get it at Penquin.com and Amazon.com.