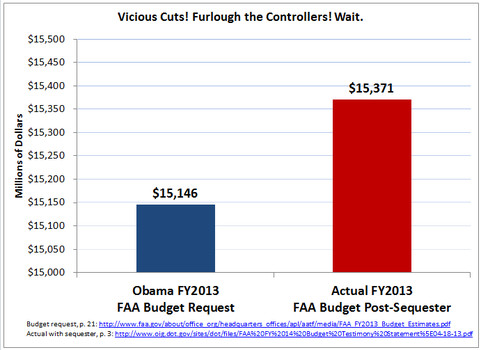 UPDATE: Maryland’s Dan Bongino, today observed that DC-area airports have exempted themselves from the below-mentioned Sequester cuts! This coming on the heels of today’s announcement that some in Congress are looking to exempt themselves and their staffs from Obamacare. How does one describe such people?

April 25, 2013 A picture is worth a thousand words. The FAA made news this weekend as hundreds of flights were delayed due to cuts in air traffic controller hours, supposedly as a result of the Sequester. Transportation Secretary Ray LaHood claimed that “We looked everywhere possible to avoid the kind of furloughs that are now taking place.” Obama Press Secretary Jay Carney added:

The fact is Congress had an opportunity, but Republicans made a choice. We made it clear that there would be these kinds of negative effects if Congress failed to take reasonable action to avert the sequester…

They are simply lying. There is no other way to describe it. The accompanying chart, courtesy Phil Kerpen, shows that the FAA has a larger budget now, after the sequester, than the President requested for 2013.

This President is willing to put lives at risk and maximize inconvenience for travelers in a blatant effort to tar Republicans. It is a game of “I win, you lose,” designed to improve the prospects for Democrats in 2014. If Republicans stand tall and don’t give in to these tactics, Obama and his minions engage in this public defamation campaign. If Republicans cave, he demands more taxes, a violation of the “Fiscal Cliff” deal with Republicans, whose concessions included tax increases, and for whom further tax increase agreements would be disastrous. Of course it would be disastrous for the economy as well, but Obama and his crew have already shown they could care less about the economy.

Candidate Obama won his election through fraud, deceit and a “charm offensive.” Quin Hilyer at The American Spectator suggests that President Obama is now engaged in a “Harm Offensive,” meant to “..inflict as much pain or annoyance as possible on the American public.” He cites the Wall Street Journal, which today reported FAA employees saying, “the FAA management has stated in meetings that they need to make the furloughs as hard as possible for the public…”

This is the real game here, and the President and his administration of criminals is putting your lives at risk to play it!

It bears pointing out that the only reason Obama gets away with this is because the mass media let him. They could easily show, as reported on these pages earlier, that none of these damaging cuts need to be made. Instead we get the President’s dog and pony show. Simply disgusting.

Businessman and freelance writer James Simpson is a former Office of Management and Budget (White House budget office) economist and budget analyst. Best known for his exposé on the Cloward Piven Strategy of manufactured crisis, his writings have been published in American Thinker, The New Media…