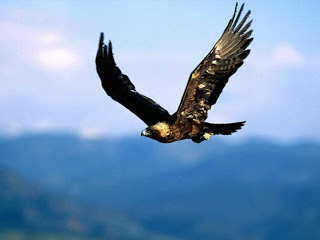 There’s an AP story out of Converse County, Wyoming, which explains that under the Obama administration wind energy companies are not held to the same rule of law as are oil, gas or electric generation companies when it comes to killing protected bird species such as Golden Eagles. Key words in that opening salvo are ‘rule of law’; that firm foundation upon which society depends in order to maintain order and equity.

“More than 573,000 birds are killed by the country’s wind farms each year, including 83,000 hunting birds such as hawks, falcons and eagles, according to an estimate published in March in the peer-reviewed Wildlife Society Bulletin.”

Don’t get the wrong idea; I’m not one of those whacko environmentalists who thinks we should give up driving automobiles that use carbon based fuels. What bothers me is an uneven approach to enforcement of laws. If there’s a law on the books it should apply equally to everyone; either that or take the law off the books. (think Obamacare and those who have exempted themselves from it)

Certain endangered bird species are protected by law and heaven help you if you kill one, either intentionally or by accident.

“Each death is (a) federal crime, a charge that the Obama administration has used to prosecute oil companies when birds drown in their waste pits, and power companies when birds are electrocuted by their power lines. No wind energy company has been prosecuted, even those that repeatedly flout the law.”

“Nearly all the birds being killed are protected under federal environmental laws, which prosecutors have used to generate tens of millions of dollars in fines and settlements from businesses, including oil and gas companies, over the past five years.

“What it boils down to is this: If you electrocute an eagle, that is bad, but if you chop it to pieces, that is OK,” said Tim Eicher, a former U.S. Fish and Wildlife Service enforcement agent based in Cody, Wyo.”

“Since the early 1980s, the industry has known there is no way its propeller-style turbines could ever be safe for raptors. With exposed blade tips spinning in open space at speeds up to 200 mph, it was impossible. Wind developers also knew they would have a public relations nightmare if people ever learned how many eagles are actually being cut in half – or left with a smashed wing, to stumble around for days before dying.

To hide this awful truth, strict wind farm operating guidelines were established – including high security, gag orders in leases and other agreements, and the prevention of accurate, meaningful mortality studies.

For the industry this business plan has succeeded quite well in keeping a lid on the mortality problem. While the public has some understanding that birds are killed by wind turbines, it doesn’t have a clue about the real mortality numbers. And the industry gets rewarded with subsidies, and immunity from endangered species and other wildlife laws.”

Many years ago when assigned to a foot beat in downtown Houston my partner and I were placed in an awkward situation by our supervisors; issue parking tickets to all violators except certain vehicles parked in front of a particular hotel because those folks are above the law. That’s not exactly how they explained it; however, each ticket issued to the vehicles owned by that hotel eventually found their way into a supervisor’s hand and were voided as a political favor to the hotel.

Eventually our supervisors got tired of voiding tickets and approached us on the street to express their desire that we stop making things difficult. What followed was an ‘inappropriate response’, formally classified as insubordination; do I have to spell it out? It wasn’t as crude as Dick Cheney’s recommendation to Sen. Patrick Leahy during their heated exchange of words, all the same it had long term ramifications; the Department tried to have us fired.

I received a 40 day suspension for insubordination, insubordination which included my remarks all the way up the chain of command to include 3 deputy chiefs who didn’t like being told to ‘shove it where the sun don’t shine’. Those supervisors were unable to justify their attempts to enforce the rule of law unevenly and my natural sense of right and wrong had a short fuse; not much different than today.

I haven’t brought up the latest scandals involving the Obama administration, the IRS targeting Tea Party groups, Eric Holder’s Justice Department ignoring voter intimidation by the Black Panthers, Fast & Furious being swept under the rug as if it never happened or that other fiasco…Benghazi where lying and deception at the highest levels seems to be expected daily.

‘We The People’, deserve better from our government. The rule of law is important. It doesn’t matter if we’re talking about something as insignificant as a parking ticket or the slaughter of an endangered Golden Eagle; laws need to be enforced equally or done away with.

I should note, curiously; today marks 21 years to the day that I celebrate my retirement from the Houston Police Department in spite of my insubordinate nature. I bet Dick Cheney would have a line for that too.