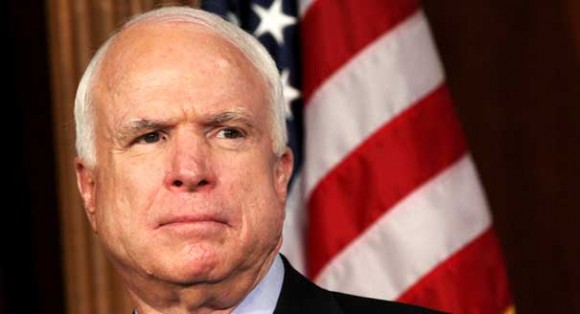 Near the end of a long story about whether there is justification for a U.S. military strike on Syria, CNN said, “Finally, there is the U.S. Constitution, which holds that only Congress can declare war and only Congress can appropriate the funds to wage war. The last time such niceties were observed was for America’s entrance into World War II.”

The constitutional provisions have become “niceties.” In fact, however, President Bush went to war against Iraq after Congress passed a resolution of support. It was not a formal declaration of war, but it served the same purpose. At least Bush went to Congress for a vote.

CNN added, “The 1973 War Powers Act requires the president to notify Congress within 48 hours of launching military action and bars U.S. armed forces from fighting for more than 60 days without congressional approval.”

As we pointed put in a column on Obama’s war against Libya, the law says more than that. The War Powers Act says the president can go to war on his own only if there is an imminent threat to the U.S. It authorizes the use of force only in situations “where imminent involvement in hostilities is clearly indicated by the circumstances, and to the continued use of such forces in hostilities or in such situations.”

Where is the imminent threat to the U.S. from Syria?

Though out of session, members of Congress, led by Scott Rigell (R-VA), are moving to assert the primacy of the Constitution in the current Syria crisis. His letter to Obama says, “Engaging our military in Syria when no direct threat to the United States exists and without prior congressional authorization would violate the separation of powers that is clearly delineated in the Constitution.”

In 2007 then-Senator Obama loudly declared that “The President does not have power under the Constitution to unilaterally authorize a military attack in a situation that does not involve stopping an actual or imminent threat to the nation.” This is a correct understanding of the law.

At the time of the Libya operation, we noted that Senator John McCain (R-AZ), who had turned into an advocate for Al Jazeera, became an enthusiastic supporter of the war, conducted with the approval of the Arab League and the United Nations, but not Congress.

Al-Jazeera, committed to the victory of the Muslim Brotherhood in the region, openly backed the “pro-democracy fighters” in Libya, playing down their links to al Qaeda and other terrorist groups. Qatar, the sponsor and funder of Al Jazeera, was the only Arab state to join in NATO operations against Libya.

As Yogi Berra might say, Syria is déjà vu all over again. Once again, McCain, Qatar, and Al Jazeera are leading the cry for U.S. military intervention.

On Tuesday, McCain was on the Neil Cavuto show on Fox News, followed by an appearance on CNN about an hour later. McCain certainly knows how to use the media, and they play right into his hands. He was never asked during these interviews about the legality or constitutionality of intervening in Syria.

In our column, “Obama’s War in Libya is Illegal and Unconstitutional,” we pointed out that the comparison to the war in Iraq was wrong and that the correct parallel was President Bill Clinton’s illegal and unconstitutional military intervention in the civil war in Kosovo, then a province of Serbia. We said. “Serbia, like Libya today, did not present a threat to the U.S., but in both cases Democratic presidents went to war with those nations anyway, in order to strengthen international organizations.”

Obama is doing the same thing regarding Syria.

“As he contemplates the American response to Syria’s gas attack, President Obama has made it clear that he is consulting international law,” notes U.S. News & World Report. The publication claimed that “a consensus is building that it may be lawful to use military force in defense of human rights without violating international law,” a concept known as the “responsibility to protect” (R2P) and popularized by Obama advisors such as Samantha Power.

We noted at the time of Obama’s Libya intervention that the “Responsibility to Protect” doctrine was mostly the work of the World Federalist Movement, a group dedicated to promoting world government by strengthening the United Nations system.

The only “consensus” in favor of the concept comes from one-worlders who want to supersede the U.S. Constitution.

But Al Jazeera is also weighing in. “The Obama team is said to be looking at the 1999 NATO air war on Kosovo as a precedent,” the channel reported. “Back then, the U.S. bypassed the [U.N.] Security Council and sought backing from NATO instead, using the protection of civilians as justification.”

The result, as we pointed out at the time, was that Clinton intervened on behalf of the Muslim terrorists in the Kosovo Liberation Army against the Christian Serbs. The result was the creation of a Muslim state, Kosovo, in the heart of Europe.

After the Libya intervention, our media tried to put the best possible face on the illegal actions of the Obama Administration. The media wanted to avoid the issue of whether Obama’s unauthorized attack on Libya was an impeachable offense. The chaos and lack of security later resulted in the murders of four Americans in Benghazi.

At the time, Republican Senate leader Mitch McConnell (KY) said he was depending on Senator John McCain, who had recently been praising and appearing on Al Jazeera, for the answer. “Senator McCain has been to Benghazi [Libya] as I think everyone knows. He is keeping us posted on what he thinks ought to be done,” McConnell said.

McCain had been in Benghazi meeting with Ambassador Christopher Stevens, who was killed in the September 11th terrorist attack.

In a May 17, 2011, column, we tried to explain McCain’s appearances on Al Jazeera: “The only explanation that makes any sense is that Al Jazeera constitutes another channel that can give—and has given—McCain favorable publicity. The Arizona Senator has a reputation as a favorite of the press who is always anxious to get in front of a TV camera. In this regard, Al Jazeera simply constitutes another outlet, albeit an unsavory one, that he can use to promote himself. He may, however, find that it will turn on him—and the West—after Gaddafi is overthrown and the Muslim Brotherhood takes power.”

It didn’t turn on him. Rather, the Muslim Brotherhood-backed terrorists turned on Ambassador Stevens and other Americans. McCain would go on to accuse the Obama Administration of covering up what really happened, ignoring his own role in the crisis.

McCain has since called the revolution against the Muslim Brotherhood in Egypt a “coup,” and wants termination of U.S. aid to the interim anti-terrorist regime.

Meantime, Al Jazeera America (AJAM) launched on August 20 with a clip of McCain saying, “What Al Jazeera has done is to achieve what I think all of us want to achieve—and that is to make a contribution.” He was actually talking about AJAM’s predecessor, Al Jazeera English.

McCain apparently still believes in Al Jazeera, despite the fact that the channel funded by Qatar has been booted out of Egypt and denounced for inciting violence and terrorism. That’s only a “contribution” to chaos.

It’s time for the media to count up the number of times that McCain has contributed to the chaos in the Middle East that he now decries.