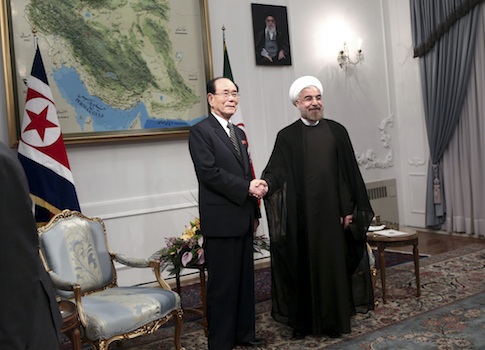 While Kerry was taking a giant leap towards war for America over the last few months (and the White House over the last year and longer), guess who were busy little evil bees? Yep, an Iranian missile group delegation visited Pyongyang as Geneva nuclear talks were actively taking place. As we gave Iran everything they wanted with nothing in return, they were in North Korea secretly developing new long-range rocket boosters for ICBMs… which is believed by U.S. intelligence agencies to be intended for a new long-range missile or space launch vehicle that could be used to carry nuclear warheads, and could be exported to Iran in the future. Both North Korea and Iran are expected to have missiles capable of hitting the United States with a nuclear warhead in the next two years. And we just gave them the nuclear green light. How’s that for suicide on an epic scale?

Several groups of technicians from the Shahid Hemmat Industrial Group (SHIG), a unit in charge of building Iran’s liquid-fueled missiles, traveled to Pyongyang during the past several months, including as recently as late October, to work on the new, 80-ton rocket booster being developed by the North Koreans, according to officials familiar with intelligence reports.

Silly rabbits… that pesky little agreement in Geneva over the weekend didn’t mean squat. Obama is not looking to slow down Iran. He is buying enough time for them to get fully nuclear armed. He wants war and he wants Israel eliminated. He also wants America on her knees. While Obama is shuttering our ICBM squadrons and destroying our silos, Iran and North Korea are beefing up theirs and he is helping them. What does that tell you?

One official described the new booster as a thruster for a “super ICBM” or a heavy-lift space launcher.

“It is completely new from what they have done so far,” the official said.

The official said the missile cooperation was disseminated in multiple intelligence reports over the past several months. The official suggested the reports were suppressed within the government by the Obama administration to avoid upsetting the talks in Geneva.

“Why does the administration want so much to negotiate a nuclear agreement with Iran if they know full well that that country is building nuclear delivery vehicles?” the official asked.

Additional intelligence reports based on satellite imagery reveal that North Korea is developing a larger missile or space launcher than its previously known rockets. The indications include a launch tower at one facility that is substantially taller than other known towers spotted at North Korean launch sites.

The blog 38 North, part of the Johns Hopkins University School of Advanced International Studies, disclosed last month that satellite photos showed a expansion at a North Korean launch site for a larger rocket.

Both North Korea and Iran are believed to be hiding their long-range missile programs, part of space-launcher development, as a way to avoid international sanctions.

And what do we do? We threaten increased sanctions. Talk about toothless threats and paper tiger visages. Once again we are saying, “You better stop that! We really, really mean it this time!!” Except we never do.

One more from the esteemed Bill Gertz:

A State Department cable from 2009 made public by Wikileaks stated that North Korea’s Amroggang Development Bank worked with the Korea Mining Development Corporation (KOMID) in the past in selling missiles and technology to SHIG.

Another cable on Iran’s Ballistic Missile program from 2009 states that “Iran has the largest and most active missile program in the Middle East.”

“Iran has accelerated its work toward developing a domestic space program,” the report said.

The Safir space launcher “has demonstrated several capabilities necessary for longer-range ballistic missiles: staging, clustered engines in the second stage (although these were small), and gimbaled engines for control of the second stage, a more advanced technique than the jet vanes used in the first stage,” the report said.

“Tehran could attempt to develop and test much of this technology under the guise of an SLV program.”

America’s enemies are actively preparing for nuclear war. Look at what they are doing, not what they are saying. The same with Obama. He is corrupt and has an evil agenda that will lead to war and bloodshed on an epic scale.